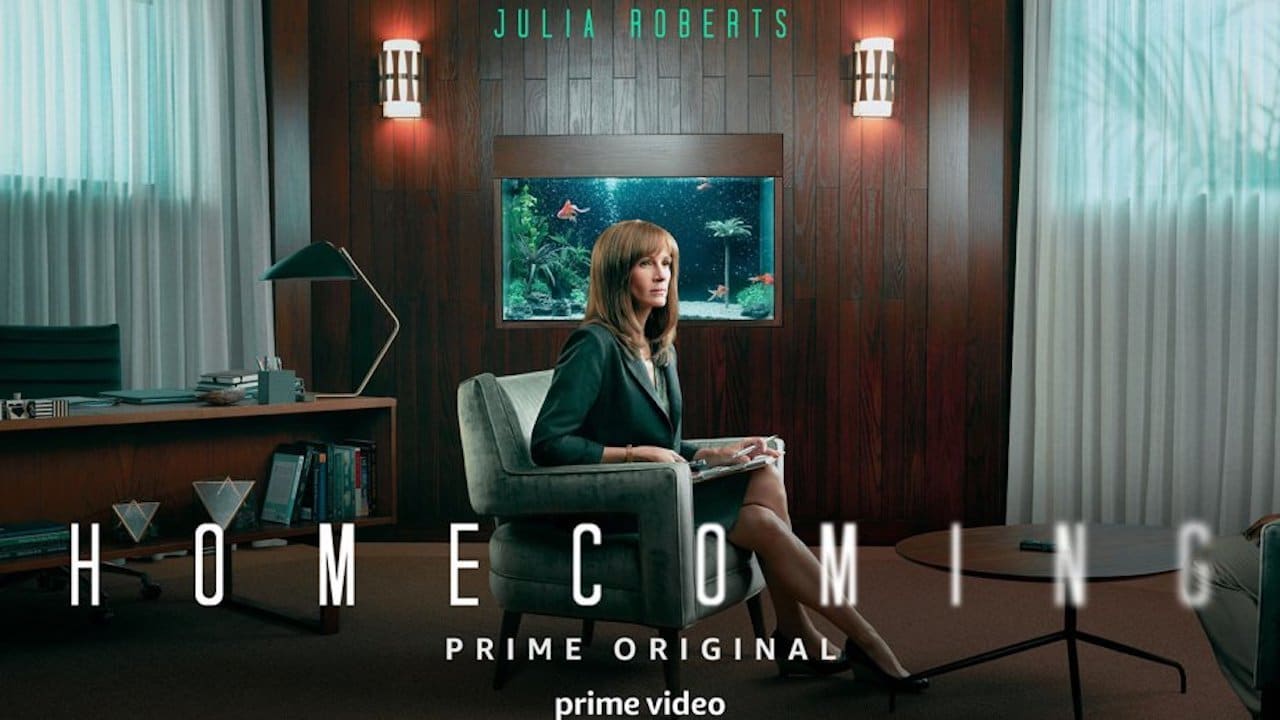 Homecoming is a web series that premiered in November of 2018 on Amazon Prime Video, as part of its original programming. The origin of the show is a narrative fictional podcast created by Eli Horowitz and Micah Bloomberg. The same duo created and wrote Homecoming in its web series incarnation. Sam Esmail, of Mr. Robot fame, directed all ten episodes of season one. Season two is in development, as the series was initially ordered for two seasons.

The main cast is strong and credentialed, and does a fine job. It stars Oscar-winning actress Julia Roberts in her first starting role in a television series, and Stephan James, who also starred in Academy Award nominee If Beale Street Could Talk. Bobby Cannavale is a recognizable and reliable name, and you’ll also recognize Shea Whigham from Boardwalk Empire. Also starring in Homecoming is Oscar-winning acclaimed actress Sissy Spacek. Cannavale’s and Whigham’s performances in particular are excellent.

Homecoming is a psychological thriller whose plot unfolds in two time-lines: the present, 2022, and the past, 2018. The two alternate constantly as its main character, Heidi Bergman (Julia Roberts), is followed in a mysterious journey. In the present, Heidi Bergman, who seemingly has a shoddy memory of the 2018 phase of her life, is now a waitress who lives with her mother (Sissy Spacek). Back in 2018, she was a caseworker at the Homecoming Transitional Support Center, a residential facility run by a corporation called the Geist Group, and whose purpose was to aid soldiers coming back from war by easing their transition back into civilian life.

The Stage is Set in the First Episode

In 2018, then a counselor, as Heidi is leaving her office, she is on the phone with her boss, Colin Belfast (Bobby Cannavale), who is pressuring her for results: tangible data that he can then take to the higher-ups as proof that the program is working. In 2022, now a waitress, she’s at work when Thomas Carrasco (Shea Whigham) an investigator from the department of Defense, approaches her about an old complaint, allegedly made by one of the facility’s workers, that one of the residents was being held there against his will.

Heidi seemingly has no recollection of things, or the soldier in question, and is hostile to the investigator. The soldier in question is Walter Cruz (Stephan James), whom we see at the very beginning of the episode in a counseling session with Heidi, back in 2018 and fresh off of leaving the military. Heidi slowly and reluctantly begins to realize that a chunk of her past is missing, and sets out to uncover it.

The first thing you notice right away when you start watching Homecoming is that it is cinematically ambitious. Not just ambitious: actually gorgeous. The aforementioned scene, when Heidi is leaving her office while on the phone with her boss, is actually a nearly 3-minute long tracking shot through the facility, made possible by using a 72-foot telescoping camera crane on a 24-foot tall platform. For the length of that scene, in which Heidi is followed going down flights of stairs, and walking through hallways, the camera walks with her in a continuous motion, filming from all types of peculiar angles: the ceiling, then right in front of her, then losing her completely to follow a passer-by, then finding her again, then slowly zooming out to an across-the-lobby perspective, and then slowly zooming in on her again. And throughout, dialogue of the phone conversation plays out, while the whole scene is immersed in suspenseful, tense and somber music, conveying a sense of distress. It is cinematic seduction at its finest.

Stylistically, there is some overlap with the Mr. Robot’s aesthetic. Obviously, Sam Esmail’s directing has a lot to do with that, but that overlap becomes more evident when you take into consideration the fact that Esmail had the artistic assistance of key Mr. Robot collaborators, namely, director of photography Tod Campbell, production designer Anastasia White, and costume designer Catherine Marie Thomas. But cinematically, Homecoming also borrows style from vintage character-based thrillers. The use of lingering single-take shots is periodically used to manufacture suspense, and you’ll find that the ghost of Alfred Hitchcock is very tastefully channeled.

A key element to the cinematic experience that is Homecoming is the music. Visual style can only go so far by itself. Well-placed music has the power to magically enhance ambience, and in Homecoming the music is eerie but somehow familiar. And, at first, you can’t quite pinpoint what it is about Homecoming’s music that is so eloquent and inebriating in its overall audiovisual composition. A little research unveils the mystery: turns out that the decision was made to not hire a composer, and instead use only pre-existing scores. In an interview to Synchblog, when asked about the novelty of a score of scores, and whether something like that had ever been done before, Homecoming music supervisor Maggie Phillips replied: “Not to my knowledge. And the more I’ve talked about it since Homecoming has come out, the more I’m hearing that it hasn’t been done.” And so, as a result, you’ll hear various throwback musical cues, from 70’s thrillers to Hitchcock’s Vertigo. And again, the result is very seductive.

So Far So Good

But here’s the problem: the hitch with Homecoming is that, plot-wise, it doesn’t match the cinematic atmosphere and tone. As you watch it, you can’t shake the feeling that something isn’t quite right, that the story isn’t living up to the cinematic experience. It feels like the writing never takes off to catch up with the suspense that is often times organically summoned by the sensorial experience. It is still worth watching because, as an exercise in elegant filmmaking, Homecoming is a tour de force. And the writing isn’t bad, it just doesn’t aptly steer the spectacular spaceship it was given the keys to.

However, as far as a season two is concerned, things may change for the better. In addition to starring as the main character of the show, Julia Roberts was also one of its executive producers. But, it has been reported that, even though she will continue her role as executive producer, Roberts will not be returning as a cast member for season two. And since Roberts was the main character in season one, that means that the show can now go in a different direction. The creators of the show seemed to hint as much with this one scene that played after the credits in the final episode of the season. In that scene, an until-then peripheral character gains unexpected relevance, suggesting that the conspiracy universe of the Homecoming Transitional Support Center and the seemingly shady Geist corporation might be what survives from season one, and not its two central characters Heidi and Walter.

The online reaction that you’ll get from comments on forums, as far what the overall opinion of Homecoming is, seems to be divided. Some people seemed to find the storyline not engaging enough despite the impressive packaging; others bought in to the experience and appreciated the world created, disregarding its flaws. But if the writing in season two finds a way to be as compelling as Homecoming’s style was in season one, the show could be a classic.