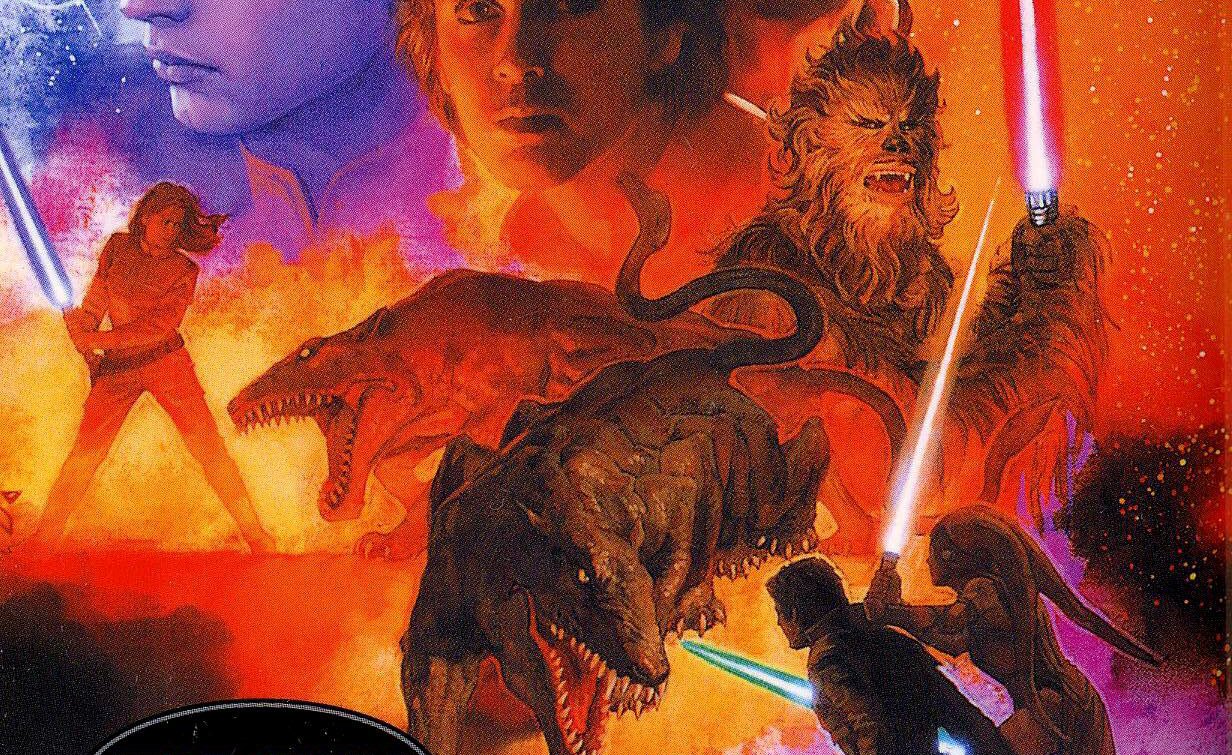 Everyone knows the characters of Star Wars, Luke Skywalker, Han Solo, Anakin Skywalker and Obi-Wan Kenobi. But there is an entire universe of characters that not many people know about. In honor of the seventh Star Wars movie announcing its cast list and that the expanded universe will not be cannon anymore, I present seven Star Wars characters that you never knew existed.

Lowbacca was the nephew of chewbacca who was born 4 years after the end of the 6th movie. He was a Jedi Knight who had a bronze colored lightsaber. He was one of the only jedi to have a lightsaber of this color. The hilt of his lightsaber was also made of wood reflecting his wookie upbringing. He also played a major role in the Yuuzhan vong war, fighting alongside Jacen and Jaina Solo. First of all, its just cool that a wookie became a jedi, also that he is related to Chewbacca makes him all the cooler.

Darth Krayt was originally a Jedi Master named A’Sharad Hett who was a general during the clone wars. He actually survived the Great Jedi Purge and Order 66 along with Grand Master Yoda and Obi-Wan Kenobi. He returned to his home planet of Tatooine and lived among the Tusken Raiders.  He was discovered by Obi-Wan Kenobi and defeated in single combat. He was unmasked and exiled from the Tusken Raiders. He became a bounty hunter  and during a mission to Korriban he discovered the tomb of an ancient Sith Lord name XoXaan whose spirit taught him the ways of the Dark side. By the time of the Yuuzhan Vong War his tutelage under XoXaan was complete and he had been captured and tortured by the Yuuzhan Vong. When he was freed his mind was warped and he became Darth Krayt, Dark Lord and Leader of the One Sith. This guy is awesome, just awesome. He survived the Great Jedi Purge, was defeated by Obi-wan, began studying under a sith, then came back to remake the sith order. Darth Krayt is one guy I would never want to meet in my wildest nightmares.

Remember Jabba the Hutt. The fat, gross gangster that had Han Solo hanging on his wall. Well, around 400 years before the galactic empire Beldorion was a Jedi Knight and the only Hutt to ever enter the order. I know what you are thinking, how does a Hutt actually go around being a jedi when they can barely move  on their own. Beldorion used the force to keep his body lean and muscular so he could fight more effectively. He was sent on a mission with a follow jedi to the planet Nam Chorios. They failed in their mission and fell to the dark side. Beldorion established himself as the ruler of the planet and seeing his fellow jedi as weak discarded him. He ruled for 400 years on the planet as a ruthless and evil tyrant. Because of this he was not killed in the  Great Jedi Purge and lived until he was killed in a lightsaber duel with Leia Organa Solo.

When you hear the name Skywalker you think of Anakin or his son Luke. But there are many Jedi who are descendants of Luke and Anakin. One of them was Cade Skywalker. He was born after the Yuuzhan Vong War to Kol Skywalker and was trained from an early age in the ways of the force. When he was only a padawan he was involved in a massive battle defending the Jedi temple on the planet ossus against the Sith. His master and father were killed in the battle but he managed to escape. After wandering the galaxy as a bounty hunter he soon attracted the attention of the One Sith and its leader Darth Krayt. Cade had the ability to use the force to heal others and himself. He used this to bring his old master back to life sending out a ripple in the force. Darth Krayt sent one of his assassins, Darth Talon, to bring Cade back to him. After several battles Cade joins Krayt and begins training as a sith under Darth Talon. They developed a very intimate relationship but eventually Cade realized that he could not become a sith and left. Talon followed him and they dueled. this ended with Cade killing Darth Talon. Cade then began to hunt down the sith killing many of them. Soon he caught up with Darth Krayt and killed him by stabbing him through the chest. Once this was done he returned to his ship, reciting the Jedi Code. Once a Skywalker, always a Skywalker.

Exar Kun was an infamous Dark Lord of the Sith who lived during the Old Sith Wars thousands of years before the Galactic Empire. He began like most Sith lords as a jedi knight who fell to the dark side.But Exar Kun was little different. He found a sith holocron on Yavin-4 and learned dark sith magic. After his training was finished he joined together with a warlord named Qel-Droma, who became his first apprentice, they created the Brotherhood of the Sith and waged war against the Galactic Republic and the Jedi Order. But the real reason that Exar Kun is one of the coolest Sith ever is that he was the first Sith to popularize and perfect the creation of the Double-Bladed Lightsaber. He also was a master using the double bladed lightsaber in combat, making him one very dangerous and really cool Sith.

Known as the Lord of Pain, Darth Sion was Sith Lord who lived in the time of the Old Sith Wars. Sion fought for Exar Kun’s Sith Empire until he was killed, but he didn’t die. Instead he called upon his hatred and pain and he rose from death. This gave him immortality but at the cost of all consuming agony.  He became a walking corpse held together only by pain and the dark side of the force. This guy is probably one of the most twisted and powerful Sith Lords ever. Anyone who uses his pain and hatred to gain immortality is one with the dark side. He lived through three different Sith rulers but eventually he was killed by a Jedi named Meetra Surik. He was struck down four times by Surik but each time got back up. Seeing that her blows were doing nothing she began talking to him. She told him to give up the force and to walk away from the force. Surprisingly Sion listened and finally let go of his anger and pain,dying at last.

You know how everyone freaked out during The Phantom Menace because Darth Maul had a double-sided lightsaber. Well imagine someone who had two of those. Add that to that an alien race who has four arms and stands several feet above an average human. That is Pong Krell, a Jedi Master who served as a General during the Clone wars. Krell had a distaste for clones, not viewing them as human and had the highest casualty rate in of any general in the clone wars. His only strategy was to attack his enemies head on with full frontal assaults.   He wielded a pair of collapsible double bladed lightsabers. The blades on his lightsabers are around 6 feet in length each, making him an almost indestructible wall of whirring blades. He also was very powerful in the force and could foresee future events. After seeing a vision of the end of the republic, Krell grew closer and closer to the dark side. During the Battle of Umbara he was captured by the 501st clone division. They believed he was a traitor. Krell told them that he was going to join the dark side and serve along side Count Dooku. He went on a rampage killed many clones with the force and his lightsabers  before he was shot and killed by a clone. Pong Krell is a terrible person. He hates clones simply because they exist and throwing them into battle because he sees them as expendable. Despite all that, he has two double bladed lightsabers, two of them. If that is not awesome I do not know what is.