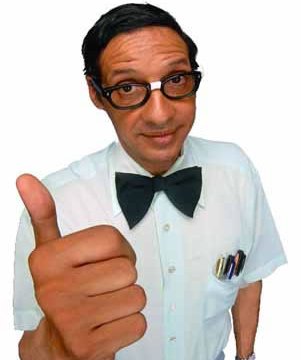 Greets ladynerds and geekmen, Ed West here with the low down on the species of our genus, or rather, “5 Types of Guys That Girl Gamers Face While Online Gaming”. I chose to write this article because I can’t just slack off around Geek Insider HQ, drinking up all of the free coffee and harassing reception, but also because the other day I came across a post by a female friend on my Facebook news feed that read, “Why are all the attractive nerdy men not dating me? I want a nerd of my very own! T.T” While I won’t delve into the intricacies of her dilemma, it did remind me that geeky men are becoming an appealing alternative to the classic “bad boy” stereotype in dating. While all of my geek brethren might be pumping a fist as if to say, “We finally made it Ed West!” I thought it fair that I provide a geek’s insight into that which they might seek: the (attractive) nerdy men.

The outside world is so boring.

The Japanese hikikomori and it’s American counterpart, the recluse, can be a classification of geek preferring to stay inside an enclosed space for days or even weeks at time. There are a wide array of reasons contributing to the nature of this geek such as severe social anxiety, extreme apathy towards the world around them, crippling failures in life, relationships gone bad, tragedies, and many more. In today’s modern age, hikikomori/recluses tend to live life almost exclusively through online interaction via social networks, image boards, forums, and online video games. Though not necessarily agoraphobic, hikikomori/recluses often avoid going outside, and as a result live in cluttered and or messy environments. In situations where no family or friends are present to bring them food or other desired items, they may travel out in the morning or at night, going directly to their destinations to conduct whatever business they deem fit before quickly returning home. These guys are easiest to spot on massively multiplayer online RPGs, as they get to live a fantasy life that allows them to escape from their own dreary reality. As they rarely ever leave their chosen space, the hikikomori/recluse is frequently unemployed, and thus broke unless they can find some means of a sustainable income through the internet. They are known to come across as bitter/jaded when discussing IRL (in real life) matters.

For these guys, 2D girls are always better.

The otaku differs from the hikikomori/recluse in that they are considerably less opposed to going outside of their “man cave”, and possess somewhat better offline social skills than the former. Still, this isn’t saying much when comparing one’s social skills to those of a hikikomori, which are almost non-existent. That being said, a ladynerd might take caution when seeking out this strange beast. These are geekmen that sometimes play a dizzying amount of H-Games on the regular, and as such may approach life with the same mindset as they do said games. See all of those posters, figurines, etc.? That is your competition ladynerds, not the cute girl in the cubicle next to him at work. Somewhat docile, and even charming at times, can become enraged/butthurt during heated debates over anime. Do not engage at this point unless you have: read the manga, seen the anime subbed/dubbed, watched the OVAs, and know the entire cast of voice actors for both of the subbed and dubbed versions. Their gaming tastes are mostly universal, and you can catch them on anything from Battlefield 3 to Starcraft: HOTS, but it should be noted that they hold a place in their hearts for games featuring manga-style artwork/animation as well as fan service.

So you forgot to call MIA in mid and, in a lack of better judgement, told top to, “Chill out, it’s just a game.” Next thing you know you’re hit with line after line of “F- you!” “I’d punch you in the face if I saw you on the street!” and “I HATE NOOBS THEY RUIN MY GAMES!” This type of guy plays for himself while insisting that he never play by himself. While it may confuse the rest of us, this guy loves to compete for the sake of domination and the personal reassurance that victory provides him. His teammates are simply tools, a means to this end. When he cannot achieve this end, it is surely not himself that he should blame–due to a commonly over-inflated ego–but these “tools” that have failed him. All that remains at this point is rage. Keyboards and joysticks will be snapped in two or slung forth into the nearest wall. Vehement gibberish will roar over the airwaves as this guy rages into his mic. The threats, the insults, the butthurt will collide as you witness a meltdown of Chernobyl level proportions. You can catch these fellas on XBox Live playing first person shooters like Call of Duty: Black Ops II, and Battlefield 3 as well as sports titles such as Madden Whatever. They are also known to be a part of the Glorious PC Gaming Master Race, and on this platform can be found all over in MMOs like World of Warcraft, MOBAs like League of Legends, as well as any and every FPS ever released on the PC.

Prince Charming armed with a keyboard.

Perhaps the most socially capable member of this list, the white knight is fully aware of the fact that females are present on the internet. So much so that in any instance where a female may find herself at odds with the online world, these dashing geekmen swoop in to save her. The method of rescue can be as simple as siding with her in an online argument (no matter the topic or female’s views), but what makes these men notable is the intent behind their actions. While this type of guy will deny it, 9 times of 10 he is aiding the female in question in hopes that he will be rewarded with internet romance. Ladies be warned: while this bunch is mostly harmless and inoffensive (towards the fairer sex), they look at you with the shadiest of pervy intentions. As is such, these are the guys that make up the population of most friendzones worldwide. They are unlimited in their gaming territory and can be found anywhere, at anytime, and on any day.

To be honest, I couldn’t fathom a picture to sum up the vast majority of gamers who don’t fit into any of the categories mentioned (or not mentioned) above. Depending on what you call normal, that might just be this group. These guys don’t rage particularly hard, may or may not be into anime/manga, enjoy going out every now and then, and can be decent people just for the hell of it. The best quality of this group is that they often like to game for fun, whether it’s with females or males, and tend to treat others the way they’d like to be treated. It may seem hard to find these guys, but don’t give up–they’re everywhere. It’s just hard. Like finding that one shiny Pokemon, but when you do–oh boy. As for me?

Games on TV: Things that exist, things that don’t, and things you wish did