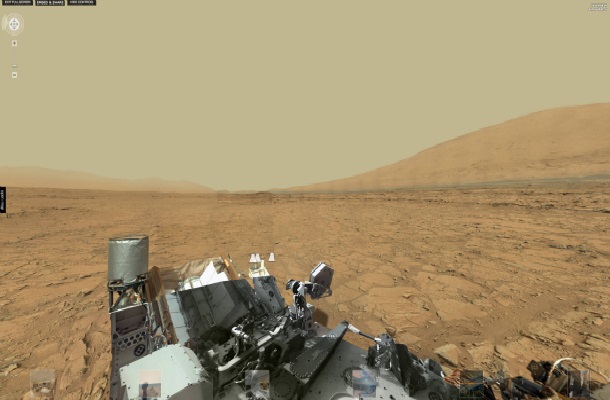 A mind-boggling 4 Gigapixel panorama image of the surface of Mars has been created by stitching together another mind-boggling 407 photos of the red planet.

Thanks to NASA’s robotic rover – Curiosity – we earthlings have been getting to see a lot more of Mars recently. Andrew Bodrov, however, made it more interesting. Petapixel put up his panorama a couple of days back. By combining 407 photos taken by the rover, he created quite an impressive 360-degree panorama. 295 images from Curiosity’s Narrow Angle Camera (NAC) and 112 images from the Medium Angle Camera (MAC) were taken together, and they don’t even belong to the same day. The pictures have been taken on Mars Solar days 136-149. That is almost 2 weeks. That is not apparent in this 4-billion-pixel panorama though.

Mars has been astrobiologists’ favorite planet – primarily because its been widely believed to have the closest conditions sustainable to life in our solar system.

The Curiosity rover has had its time in the headlines since its launch. Early last month, it’s main on-board computer experienced some data corruption and was forced to shut down, while the rover’s backup computer had to take over. Within days of the incident, NASA released data from rock samples collected by the Curiosity rover that suggested (or confirmed, rather) that the ancient Martian surface may have been the home of microbes a long time back. This claim was based on the discovery of water in the samples, that too, of a low enough acidic level to support life.

The photos also feature Mars’ Mountain Sharp. It’s almost like being on the surface of Mars. And they say this place had life long back. Creepy.