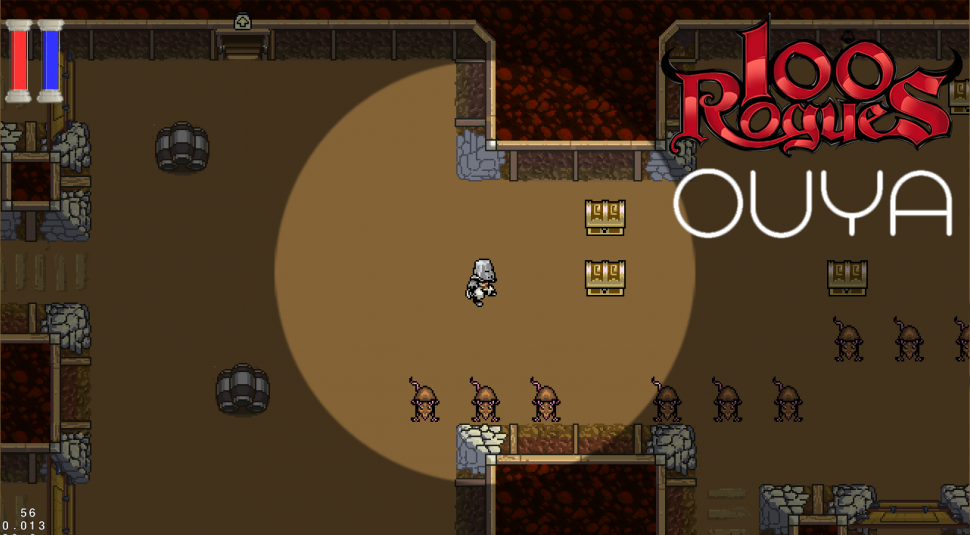 100 Rogue is a rogue inspired dungeon-delving game where you guide your titular hero on a quest to kill Satan. It takes a child-like view of the typical role-playing experience adding a unique level of humor. The OUYA is seriously lacking on the RPG front, so how does this old school game stack up to the competition? Read on to begin your adventure…

“You enter the tavern, behind the counter you see a worn old inn keeper.”

This line probably sounds familiar to some degree to anyone who has ever played a session of Dungeons & Dragons. Of course the only logical thing to do is ask the innkeeper for a quest, because all heroes need a quest. If it was a session of DnD you’d probably get your quest, but in 100 Rogues you’re met with a tortured soul who wants nothing more than to stave off his quest giving addiction. Yet he gives in asking you to investigate the basement only to realize his error once you’ve completed the task. It is moments like the inn basement tutorial that let you see the clever humor behind 100 Rogues.

If you asked what about the gameplay truly sets the game apart, I honestly wouldn’t have much to tell you. It’s pretty standard Rogue-esque gameplay is enough to hold up the wit of the game, but is never really that addictive. 100 Rogues is turn-based and every action you take eats up your turn allowing the dungeon monster to act. Drink a potion, walk left, stab someone, they all take up your action for the turn. If you attack a monster he gets to stab you back, if you run away form a monster then he’ll stab you as you walk away.

There is no attack button in 100 Rogues; you merely tilt your analog in the direction you’d like to move. If there is an enemy in the square you want to move into, then you’ll attack instead. Ranged weapons function a little bit different (more annoying). If the weapon is equipped you hit A to bring up targeting then select a target and fire. If it is an item in your inventory you want to throw then you have to open the inventory, select the item, select throw, select the target, then confirm. If I had one major complaint about combat it would be throw items. They generally don’t do much damage, and utilizing them in the game is clunky.

Outside of the physical weapons you can obtain in the dungeon you also get access to the special abilities of the heroes. It’s these abilities that really set the four different heroes apart with gameplay. You can select from one of four heroes: The Dino Man Bruiser, Fairie Wizard, Human Crusader, and Skellyman Scoundrel. Each of the character feels very different from one another thanks to the unique skill trees they all have access to. The Wizard likes long range magic, which the Dino Man prefers to beat things to death with his bare hands.

Where 100 Rogues truly shines is in the humor department. It is almost as if they designers sat down with 10 year old versions of themselves and asked what they wanted in the game, and that is a good thing. What should Dino Man do? Eat things and turn into a big dinosaur! What happens if the religious Crusader needs help? God comes to help him! The first time the giant hand of God literally reached down form the sky to squish my enemy I just about laughed my ass out of my chair.

The visuals and sound of 100 Rogues are clearly inspired by the SNES era. The game is entirely pixelated and the soundtrack is a classic 16-bit fantasy beat. The game was clearly crafted by someone with a love of the era and the genre. There really isn’t a whole lot to say in this area aside from the fact that they did a good job replicating a solid SNES style.

If you use the free version you’ll only get access to the first three levels of the dungeon and the first rank of skill trees. After playing through the free section with all four characters I can confidently say that this game is worth the $4.99 they’re charging for it. If you’re looking for a Rogue throwback with some DnD humor then 100 Rogues is the game for you