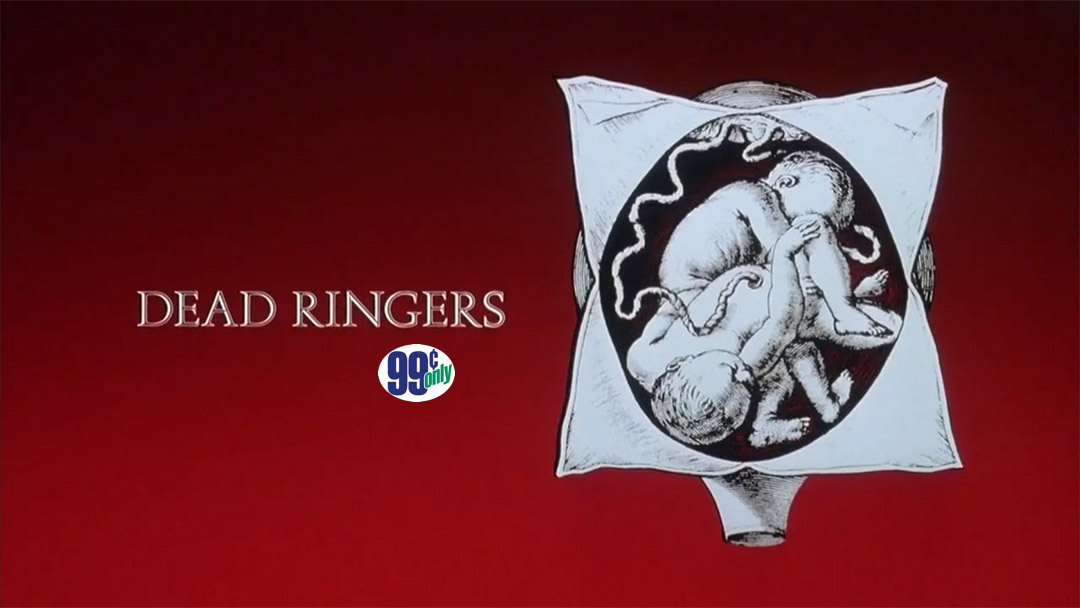 Ok, raise your hand if you were totally excited by the Office Christmas Party trailer last fall. We’re gonna go ahead and assume there aren’t many hands in the air. Which is fine, ’cause we weren’t at all interested either. And we’re still not interested … even at $0.99. The good news is that we didn’t have to suffer through it. That’s because the kind folks at iTunes snuck a classic from our favorite Canadian shockteur into their ‘Movies You Might Have Missed’ section this week. So …

Beverly (Irons) and Elliot (also Irons) Mantle are identical twins. They look so much alike that even those closest to them cannot tell them apart. But looks are not the only thing the brothers share. Their booming gynecological practice, their women, and quite possibly their soul are joint possessions too. Their idyllic but supremely twisted life together takes an unexpected turn when an actress named Claire (Geneviève Bujold) enters the picture. When one of the brothers falls madly in love with her, the Mantle Brothers must decide if they can lead separate lives and still exist. And if not, can they keep sharing everything? Find out in David Cronenberg’s psychological thriller Dead Ringers. 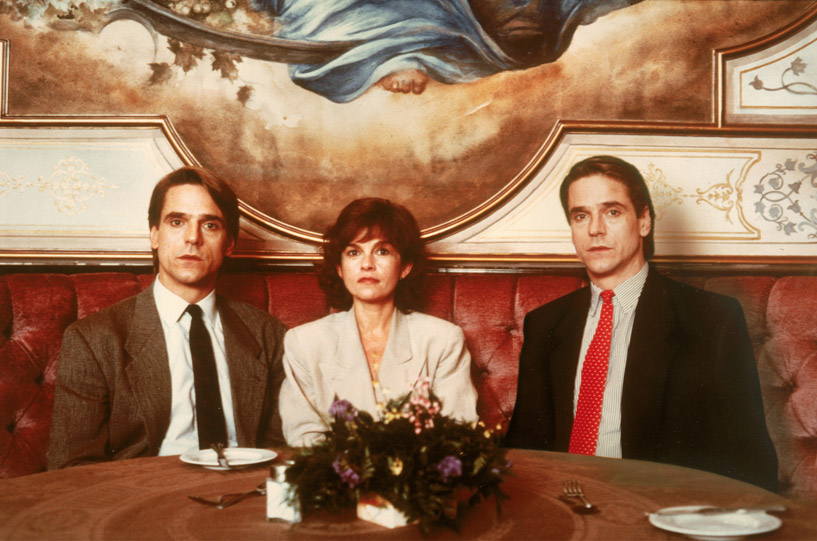 Separation Can Be a … Terrifying Thing

We’re assuming that if you read the name David Cronenberg just now and you’re still with us, then you know what you’re in for with Dead Ringers. You’ve probably even seen it before. If that’s the case, welcome aboard. If the Cronenberg name didn’t ring any bells, well, you should probably stop reading so you can go watch Scanners (1981), The Fly (1986) or A History of Violence (2005) immediately … and if time permits, you should fit Eastern Promises (2007) in there as well. Understand, that’s not a knock against Dead Ringers. We just happen to believe that – as solid as this film is – it hardly feels like the right jumping in point for the weird, eerie, and body-obsessed world of David Cronenberg.

That being said, Dead Ringers may well be the most fully realized of Cronenberg’s cinematic creations. By that standard, it’s one of his most genuinely disturbing creations as well. That’s likely because the bizarre story at the center of Dead Ringers is based on the real life tragedy of Stewart and Cyril Marcus. Though Cronenberg is clear that Dead Ringers is a ‘highly fictionalized’ account of the real life brothers’ demise, the themes of perilous co-dependency and decline/death by way of barbiturate addiction are at the heart of the director’s film. Working with Co-writer Norman Snider, Cronenberg takes the bare bones of that story and builds enough cartilage around it to serve up a meaty, utterly disquieting psychological thriller. One that looks, sounds, and feels like a work of art … if an unabashedly gothic one.

Of course, Cronenberg has never been a filmmaker to shy away from the gothic. His films are often semi-celebratory explorations of the darker corners of the human psyche. Those films frequently explore the complicated relationship between the human body and the human mind … particularly the twisted ways in which some meddle with their own flesh … or the flesh of others. That’s led the director to essentially carry the mantle of the ‘body-horror’ sub-genre over the years. While Dead Ringers takes a slightly milder approach to these disconcerting topics, Cronenberg still manages to explore some seriously aberrant behavior throughout. And make no mistake, some of the gynecological examination scenes are certain to make both male and female viewers more than a little squeamish – particularly in the current political climate.

Cronenberg takes those squeamish moments to terrifying heights late in the film when one of the twins brings his homemade medical devices into the picture. Trust us, you will shudder at the very sight of them … even if you never actually see what they do. The fact that Dead Ringers feels so creepy – even gory – without going all in on either is one of the greatest tricks Cronenberg manages with this film. But still not his greatest trick. That title belongs to the director’s ability to pull a pair of towering dual performances from his star Jeremy Irons. What can we say of Irons’ work on Dead Ringers except that the entire film would fall apart behind the slightest fault in either of his performances.

That never happens. Irons plays his roles with devout sincerity through every high and low – and even lower – that Dead Ringers throws his way. And just in case we haven’t been clear, the film never falls short of absolutely enthralling … even 30 years after its release. 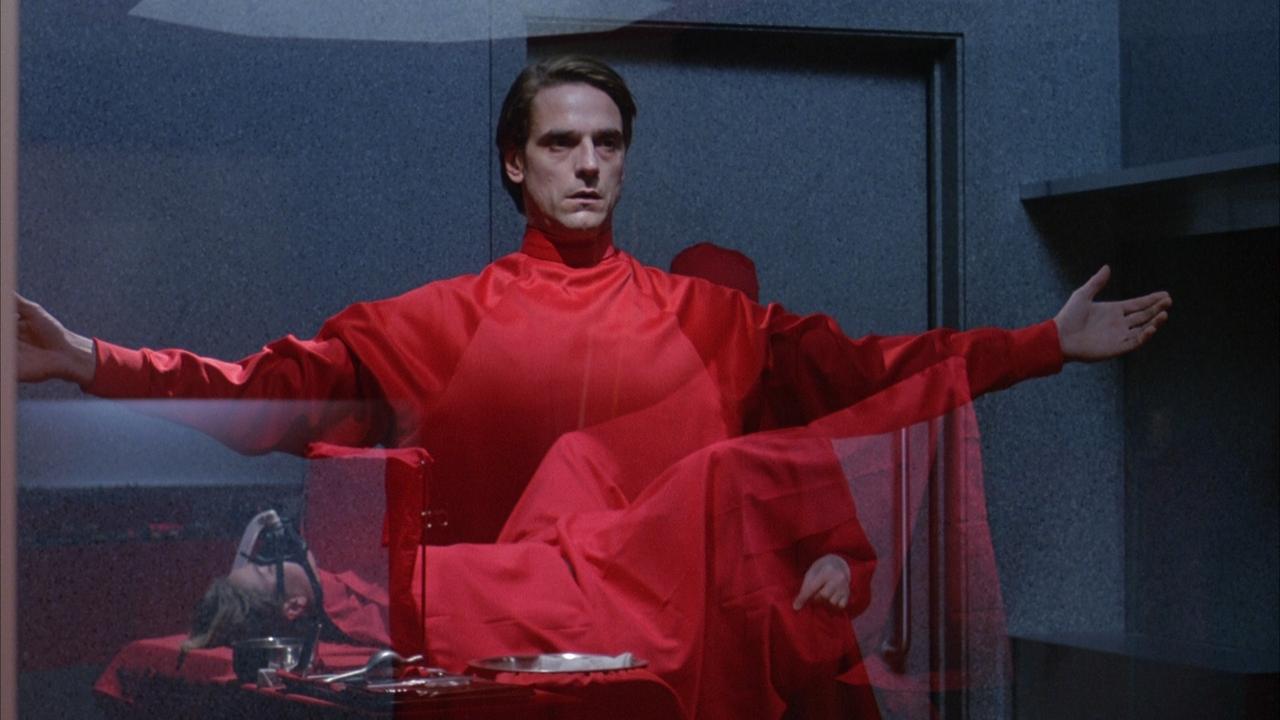 You bet. But be warned, Dead Ringers is not for all tastes. It’s glacially paced and it features unnerving content and scenarios that feel a little bit too real, and will creep you out accordingly. Now, if you’re down for a heavy dose of weird and creepy – and if you’re looking for an intellectual, pseudo-horror movie to add to your 31 Days of Horror Marathon – you’ll not find a better fit. If you can’t handle that sort of thing, we implore you to steer clear of David Cronenberg’s work altogether. ‘Cause that’s sort of his thing. And he’s legit one of the few cinematic masters still working today. So who are you to judge?

Right on Target: Comics to Read if You Love ‘Arrow’

DC vs. Marvel: The Punisher’s Premiere Date Is the Same as Justice League’s