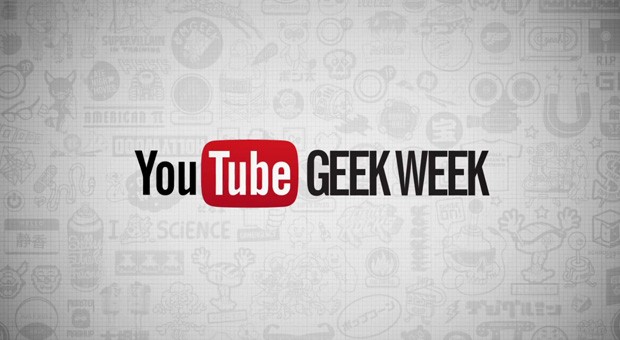 Geek culture is everywhere, if it isn’t incredibly obvious yet. I mean, gosh, we’ve got TV shows like “The Big Bang Theory” that celebrates it every other second! Currently, we’re seeing superhero movies rocking the box offices so I think that’s saying something. With Google’s YouTube being one of the most popular websites in the world right now, I think it’s pretty safe to say that there’s a whole mess of geek-ism that exists there. Take a look at YouTube’s most subscribed channels! I’d wager that over half of them are dedicated to geek culture. Just look at the Yogscast or Tobuscus. It’s absolutely natural for YouTube to take advantage of this and create one week to recognize all things geek in what is being called “Geek Week.”

“Geek Week” will be highlighting over 100 different YouTube channels and will showcase a ton of new videos, collaborations, premieres and all around the best geek videos the website has to offer. Beginning on August 4th, each day of the week will have a specific theme. Each theme will be hosted by a different YouTube channel and will include one video of highlights. Let’s just hope our hosts are tolerable, yeah?

August 4th is being called “Blockbuster Sunday.” What’s that, you ask? Well, kinda precisely what it sounds like. Sunday dedicated to blockbusters. No, not the revival of the legendary rental store, mind you, but a day that highlights definitive icons in geek culture. YouTube’s FreddieW will be hosting this day’s celebration. We’ll be seeing some characters, movies, and shows that kind of outline what it means to be a geek. Additionally, we’ll see a spotlight of what YouTube considers the best original fantasy, sci-fi, and animation around.

August 5th is being slated as “Global Geekery Monday.” Really stretching for a name there, eh? Ah, whatever, this day showcases everyone’s favorite classically geeky show “Doctor Who.” I think that’s enough to make me interested in checking Monday out! Also, Monday will feature some anime from Tokyo. There’s a HUGE following of that sort of thing all over the world, so I feel as though it’s UNBELIEVABLY smart for YouTube to feature it. To top it all off, we’ll see a new episode of “Knightmare,” which is a British children’s TV show. The day will be hosted by YOMYOMF.

August 6th is “Braniac Tuesday,” a day I wish was dedicated 100% and solely to Brainiac, my favorite Superman villain. Oh well. Instead, Tuesday will focus on science and education channels on YouTube. Sheldon Cooper would be proud. He’d probably be hoping “Fun With Flags” would make an appearance, I’d bet. Joking aside, I really hope we see some representation of one of my favorite YouTubers: VSauce. Our science-y day will be hosted by The Spangler Effect and Veritasium.

August 7th is “Super Wednesday,” which I’m almost certain we all saw coming. Wednesday will be showing the praises of superheros and recognizing their powers. YouTube states that we’ll be looking forward to parodies as well as demonstrations of “real-life superpowers.” Oh no, let’s just hope I don’t have to sit through Smosh pretending to be funny during this. Oh, did I offend someone? Oops. In monumentally more exciting news though, we’ll get to see a special trailer for Marvel‘s upcoming film, “Thor: The Dark World.” Stan Lee’s World of Heroes will be hosting Wednesday.

August 8th is “Gaming Thursday!” It was only a matter of time before that showed up. YouTube’s got a MASSIVE gaming following due to the availability of posting gaming walkthroughs as well as gaming-centered skits and comedy. Everybody loves video games these days, so Thursday is appealing to an enormous market. We’ll be seeing live play-throughs, game-inspired original series, and video games in real life. Dear lord, I hope the latter isn’t Smosh again. Machinima and Maker Studio’s Polaris will be hosting Thursday’s events. The UK will be showcasing an attempt at a gaming world record as well.

Lastly, YouTube through together August 9th as “Fan Friday.” This day will feature costume play, as well as sci-fi themed cooking. Additionally, it seems as though we’ll also be looking at what is being known as “impassioned nerd debates,” according to YouTube. I don’t know why that’s being showcased, but hey, they needed one more day I guess. Felicia Day will host this last day. Wow, YouTube waited all the way until Friday to use Felicia Day?! WEIRD! Everybody loves her for some reason. Friday should be wrapping it all up with an ultimate geek quiz by Crabstickz from the UK.

So there you have it, a look at YouTube’s first geek week. I don’t know, but it feels like YouTube is trying to patronize the geek culture to me rather than celebrate it, but that’s just me of course. I’m not one to be a fan of the over-the-top YouTube channels, so I hope it’s not headlined by those sort of folks. There are some genuine people in the YouTube community that celebrate geek culture, and I simply hope that they are represented in the right light. All in all, it’s something to look forward to! What are your thoughts?