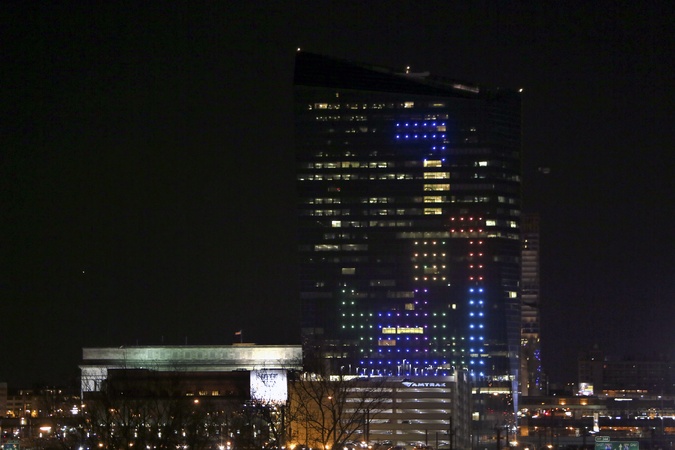 Have you ever stood beneath a skyscraper, looked up at the gleaming, imposing height and thought, “Wow, that would make a great video game”? Me neither. But apparently the Philadelphians did, because last weekend the City of Brotherly Love turned into the city of Tetris when two skyscrapers were appropriated for a special celebration of the game’s 30th anniversary. The “screen” was 29-stories high, and was created by hacking 1400 colorful LED lights already built into the side of the Cira Centre to make what is said to be the world’s largest Tetris game.

An online lottery randomly selected over 100 lucky people to play using arcade style joystick controllers. They stood half a mile away so they could get a good view of the massive game while they played. Hundreds of spectators showed up to see the once-in-a-lifetime display as part of Philly Tech Week. The mastermind behind the big idea was Dr. Frank Lee, Drexel University’s associate professor of game design (that’s a thing?). For last year’s Philly Tech Week, he used a skyscraper to create the world’s largest game of Pong, which currently holds the Guinness World Record for “Largest Architectural Video Game Display.” The Tetris game is twice as big, so it will undoubtedly take that title as soon as the Guinness people check it out.

While technology can sometimes be isolating, the Associated Press reported that Dr. Lee said that this game was a way of uniting Philadelphia. Dr. Lee hopes displays like it will help turn Philadelphia into a gaming center, highlight the local gaming companies, and get people thinking about the exciting possibilities of gaming and technology. I’m going to go ahead a say mission accomplished, because there is no possible way locals could have ignored the startling sight of a giant Tetris game playing out on their city’s skyscraper.