The World’s Largest Gaming Collection Is Officially For Sale 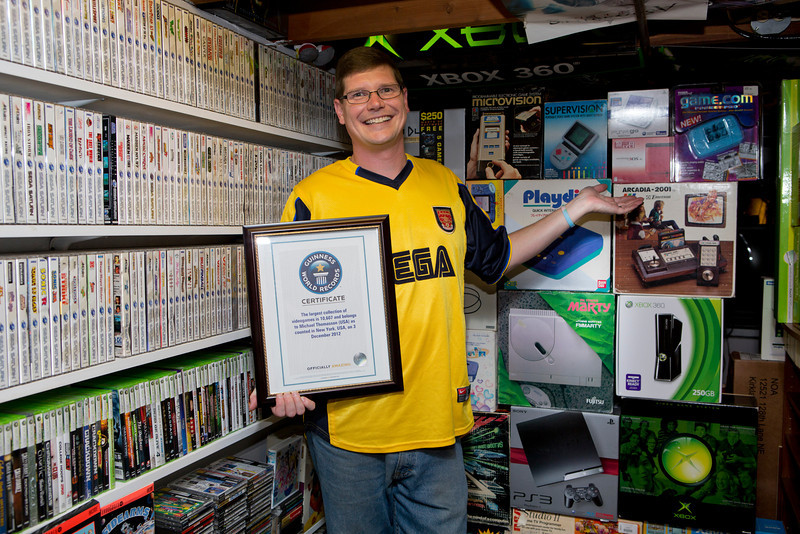 On the Market: Largest Gaming Collection is for Sale

If you’ve ever wanted to buy the world’s largest gaming collection now is your chance. Meet Michael Thomasson, an avid gamer and videogame collector. Since 1983, this New Yorker has spent thousands of dollars in order to feed an unwavering, ravenous appetite for gaming paraphernalia, acquiring rare SEGA/Nintendo releases as well as items too recherché for basic collectors. In 2012 Thomasson set the Guinness World Record for a whopping collection of 10,607 games. Continuing to build upon an already massive collection, Thomasson has since then added more games, bringing the total to approximately 11,000. One lucky buyer of this videogame-hoard will also receive the official Guinness Certificate.

Where It All Began

In an exclusive interview with Retro Gamer magazine, Thomasson revealed how he began collecting gaming paraphernalia. “I started in 1983 with the ColecoVision and had acquired a near complete set, but sold the whole collection to purchase a Sega Genesis when it was released. I was a big fan of the arcade coin-ops and Sega was bringing them home in great fashion at the time. So, I essentially hit the reset button in 1989 and started all over again.”

Thommasson continued, “I started seriously collecting when I was helping my nephew clean out his basement in 1993. He started to dispose of his Sega Master System and Odyssey2 into the trash when I mentioned that I always wanted both of those systems and never had a chance to really play them. At that point he gave them to me and I became hooked all over again.”

Further reflecting on the climate and trend of game collecting, Thommasson stated, “At that time people were not really into collecting games and their value had not yet exploded, so I was able to buy dozens and dozens of games for those systems via pawn shops and flea markets for pennies on the dollar — long before eBay and resellers popped into existence.”

A Glimpse at the Collection’s Rare Video Games & Consoles

Anyone with a stash of over 11,000 games is bound to have something obscure. With 108 consoles, Thomasson has pretty much everything,including the original Sega, BattleSphere Gold for the Atari Jaguar, Nintendo Virtual Boy classic Jack Bros., and Dino Park: Tycoon a popular game for the 3DO platform. Admittedly, some videogames and consoles are relatively unheard of in 2014, but thanks to Thommasson, this collection highlights how technology has transformed over the years.

Sadly, all good things eventually come to an end. “I have chosen to sell my collection to better support my family.” said Thommasson. No worries, Thommasson is no stranger to selling his beloved items. In fact, he sold his 1998 collection to pay for his wedding. From there, he started from scratch, purchasing approximately two games a day and following a strict budget of $3,000 a year, Thomasson’s gaming stash multiplied and reached its towering size.

The current bid is $750,000 USD. Hurry, the auction ends Sunday June 15th! Who will be the owner of this impressive collection?