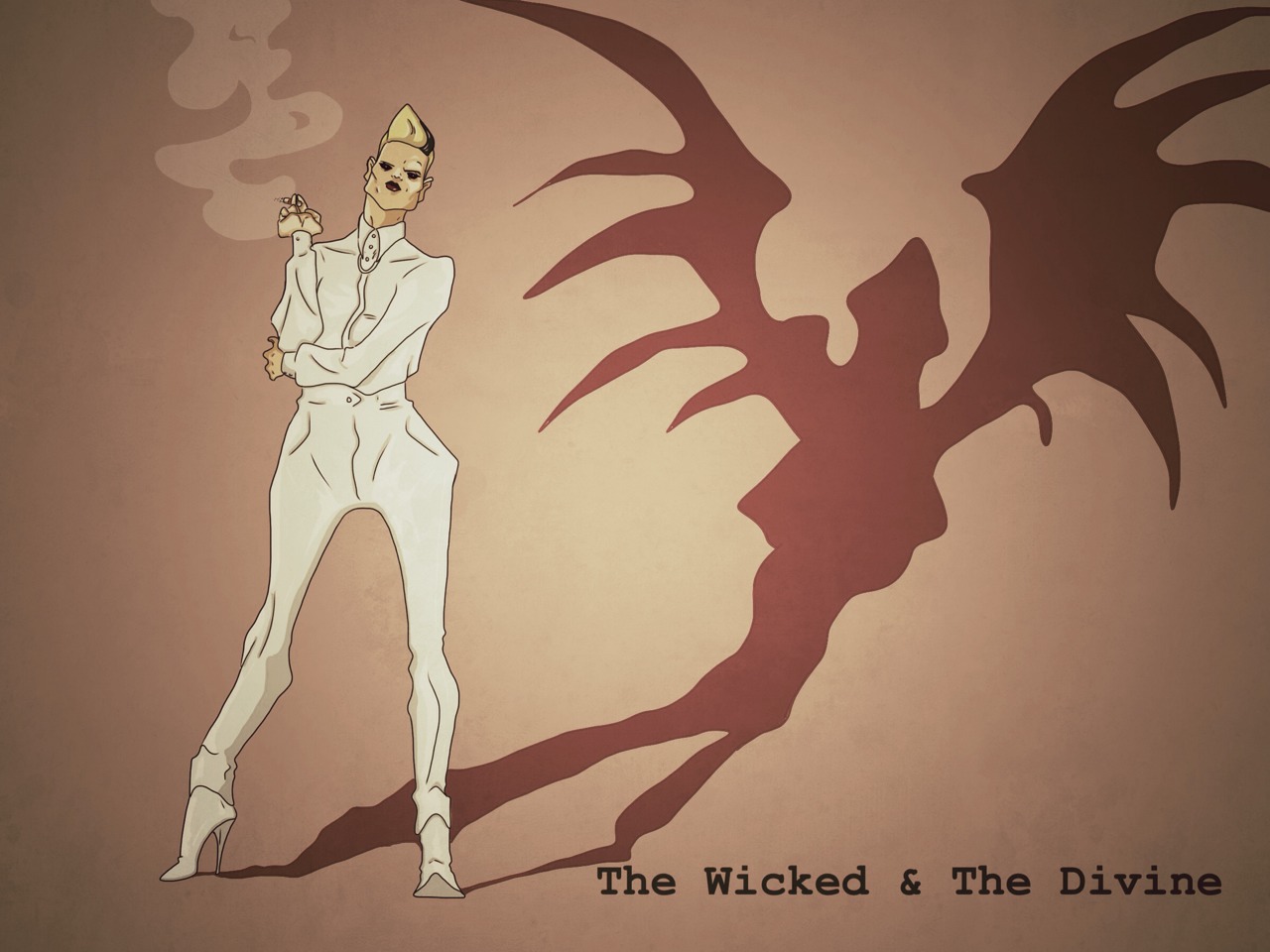 So you’re seventeen.  You live with your parents, you go to high school, you probably have or at least want a boyfriend or girlfriend, and college is just around the corner.  With adulthood just ahead of you, you find out you are special.  Not just the “everybody is unique” kind of special.  You are actually the reincarnation of a god.  But it comes at a price; you die before you reach the age of 20.  What do you do?

The Wicked + the Divine #1 opens with Laura, a seventeen-year old full of admiration of gods made flesh, sneaking into a concert for Amaterasu, Shinto goddess of the sun, reincarnated as Brit and fellow teen, Hazel Greenaway.  During the inspiring concert, the many people surround Laura pass out due to the inspiration flooding their senses, with Laura being the last standing, though not for long.

Awakening later amongst the crowd, Laura is surprised to encounter Luci, a straightforward and unabashed reemergence of Lucifer, dressing much like David Bowie.  The first to awaken, Laura gets the chance opportunity to meet Amaterasu following her interview with an internet correspondent hard-pressed to dispel the mystique behind the gods of their world. In this world, they are ever apparent and perform miracles.  The ones shown here (Amaterasu, Lucifer, and later Sakhmet) aren’t silent participants that only move in shadow and inspire in secret.  Rather, in this world they do what they can publicly, it seems, having their identities known and with great regard.  Most of this seems to be a hard pill to swallow, especially for internet skeptics like Cassandra, who after supposedly attending several occasions of miracles has been left wanting each time.

Though a confrontation arises between Luci and Cassandra as to the reality of their powers, it is quickly cut short when two gunmen open fire on the after party, killing several attendees and further enraging Luci.  Against the wishes of a worried Amaterasu, she repeats a certain ritual from earlier in the book to awaken her powers and detonate the heads of the two assailants before they can escape. Though the action was done in defense of her and her comrades, Luci is arrested and tried on the deaths of the two humans.  A stellar back and forth arises here as to what can be construed here as her actions and how it can be assessed in court.  Such a court determination as to the actions of reincarnated Gods had yet to be determined for them in the court of law.  Doing so here not only would confirm her divinity, but also the legitimacy of any other cases involving gods later down the line.

Not trying to fall into any legal maneuvering such as this, the judge tries to place Luci in contempt, however.  Calling his bluff, Luci playfully threatens him with the same fate as the gunmen before him and her threat is made true, though it would seem not by her.  With the snap of her fingers his head also explodes in a mess of blood, brain, and bone in clear view of an astonished court, Luci included.  Many mysteries remain for the series, including a murder mystery.

Written by Kieron Gillen (The Young Avengers), the story is very frank in introducing this world and it moves forward with all due confidence of a team who has been here before.  The dialog is very realistic and thought provoking and it will definitely draw readers in who are begging for smart and consistent wordplay.  Gillen has a spectacular penchant for writing young characters and it’s refreshing to see this move forward with a majority female cast to start off with.

This book is a beauty to behold and a wonder to look at, especially in the introduction of Amaterasu.  All thanks to the concerted efforts of Jamie McKelvie to create an awe-inspiring air about the focused god of light or make Luci feel half-menacing, half alluring every time she appears on panel is a marvel to behold.  With nine other gods set to be revealed in the series, the direction they are taking here will leave the audience wondering just how these gods will be portrayed.

Four (I want everything you have)

The Wicked +The Divine #1 is a spectacular read and will definitely draw readers in for more.  Though there is a slight amount of gore here and there, it shouldn’t derail readers from wanting to read a genuinely grand story to tell.