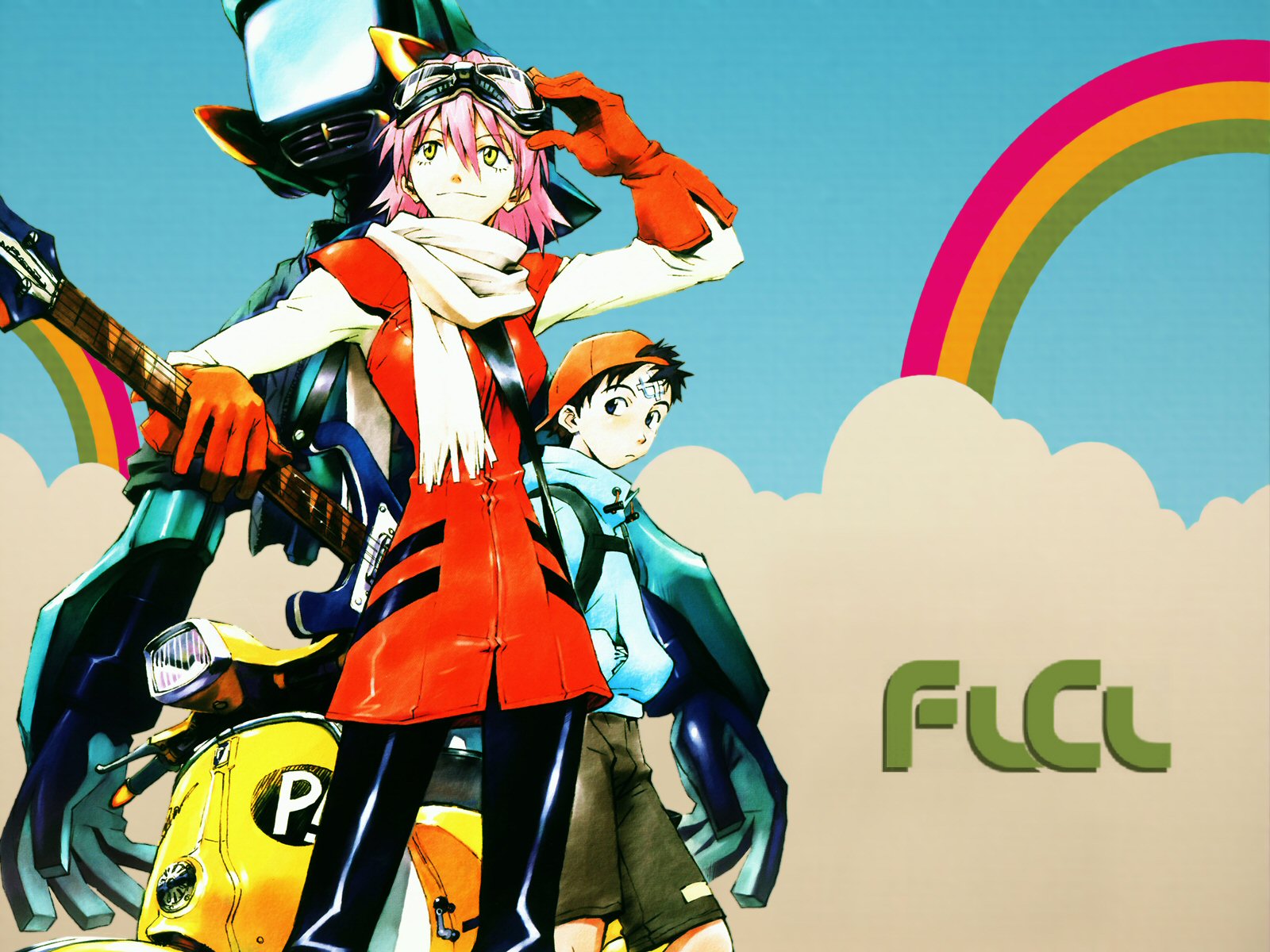 Welcome friends, to the second installment in our weekly series dedicated to bringing you awesome and free anime. This week we’re taking a look at my personal favorite anime and a show some of you are probably familiar with through Cartoon Network. This show seems to split anime fans right down the middle when it comes to love/hate. So, I’m hoping all of our fans will follow me right over here to the love side, so let’s begin.

FLCL is a bizarre show, there is no doubt about that. This is an awesomely innovative anime that has a level of insanity that makes it nearly impossible to describe to others. The plot, if you can call it that, is very confusing with many players. How everyone and everything ties in is very rarely explained to the viewer, instead leaving it to be pieced together. It opens with a young boy being smashed in the head with a guitar that revs up like a chainsaw, being swung by a strange girl on a Vespa scooter. Which of course causes the only logical thing to happen, the kid grows a horn and the guitar girl moves in. That is about how the plot progresses in FLCL. Pretty soon, all sorts of strange happenings begin taking place: people are replaced with cyborgs, things are lit on fire, people representing a shady organization start showing up. Through all of this our protagonist, 12 year old Naota, must try to come to terms with what being an adult means. When robots begin climbing out of his head, his life is turned upside down as things outside of his power begin affecting his world. The bots seem to have some connection to the strange girl on the Vespa and the mysterious factory that looms over the entire town know as Medical Mechanica. Meanwhile all of the strangeness seems to be driving a wedge between Naota and his kind of girlfriend Mamimi. All the while Naota always seems to think that “Nothing amazing ever happens here.”

Things in FLCL happen very quickly and without warning, seemingly almost random. There is a method to the madness that you do eventually pick up on once you’ve finished the series..a few times. Luckily there are only 6 episodes in the entire show and each one is only about 23 minutes long. That means sitting down to finish the entire thing isn’t that much of a time sink. This gives you what you need with FLCL, the ability to re-watch it again and again in order to grasp everything. Subtitles make this even more of a challenge as you’ve often not made it through a sentence before the scene changes, sometimes several times. But, this show is so stuffed full of symbolism that it’s worth going back over and over just to grasp a little bit more each time. With each viewing you can understand a little more, forge a few more links that will help you forge a few more the next time. It’s kind of like the Inception of anime, except way less serious. Naota struggling with what it means to be an adult is the biggest theme. Because of this, sexuality is also a topic that’s tackled in that awkward FLCL way. I don’t mean in that nose bleed, girl in the tub, anime way. FLCL is inane on the surface but serves up subtle messages and innuendo.

One of the most exceptional things about this anime is the soundtrack. The entire show is backed up by the awesome sounds of the rock band The Pillows. The music is without a doubt what brings the atmosphere of the show to life. While the lyrics are often goofy and strange the instrumentals give every song an intense emotion. Much like the show itself, the ludicrousness of the lyrics is layered on top of a much deeper meaning. FLCL may not be particularly cohesive, make a lot of sense, or even try to let you know what’s going on. But it definitely succeeds at being fun to watch for anyone willing to give it a try.

Try and decipher FLCL for yourself: Check it out!