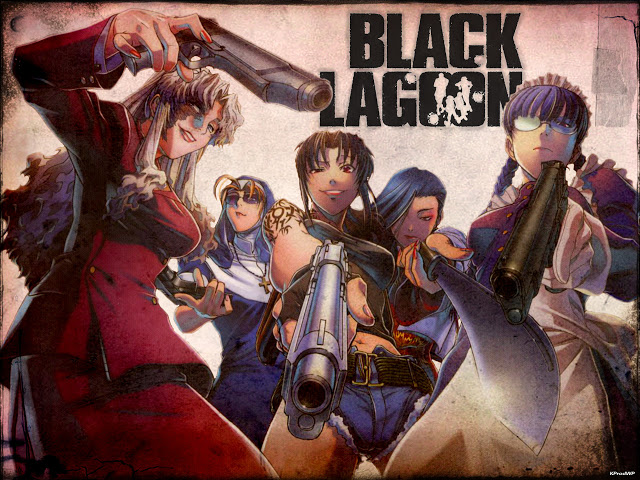 Welcome back dear anime fans, to Geek Insiders weekly series dedicated to bringing you awesome anime from around the web. If you’re low on cash but still looking for a way to catch up on some great anime then meet us here every Monday for a different free anime each week. This week we bring you Black Lagoon, an action packed series with a dark edge.

Case of the Mondays

Black Lagoon Follows the activities of a mercenary group known as the Lagoon Company. More specifically it follows the unfortunate young Japanese salaryman man, Rock, who finds himself kidnapped by the company. When his boss turns his back on Rock and declares him dead our businessman suddenly finds he has nowhere to go home to. As it turns out he had unwittingly been helping the company cover illicit activities, which is the entire reason he ended up kidnapped in the first place.

Eventually Rock decides that the only possible course of action is to join the same group who kidnapped him. He’s not exactly used to breaking laws and using guns so the transition from white collar to jolly roger is an amusingly bumpy ride. But, to Rock’s surprise, it turns out being a corporate slave gave him skills more applicable to his new job than anyone could have guessed. A mercenaries life is a dangerous one, so who knows how long an uptight businessman can really last.

For the first season of Black Lagoon character development and interaction is the main focus of the series. Rock is the newest member of a crew that includes: Revy, a sadistic and relentless killer; Benny, the resident geek from Florida; and Dutch, a former Marine and head of Lagoon Company. Benny is an easy going and chipper member of the team. Not so  much a gunfighter, he’s most seen behind computers or cracking open a beer. He is the most light-hearted member of the group. Dutch is the hard as nails leader who seems to be off screen accomplishing things and finding work more often than any other character. He can periodically give into violent tendencies and sometimes revels in the carnage Revy leaves behind, but would never hurt civilians if unnecessary.

While Dutch and Benny are enjoyable characters who get their fair share of screen time, it’s Revy and Rock who receive the most focus. This is not a love story, you’re not going to see them cross their ocean of differences to collapse into each others arms. Revy as a lunatic with little conscious who seems to have no regard for the safety of others. She will, and often does, threaten to kill Rock in a very believable way. Rock essentially become her anchor to sanity, playing the level head to her lunacy. Rock is constantly struggling to find his identity while keeping Revy from ignoring hers; All the while he comically tries to play pirate in a tie.

As deep as the character interaction can get in Black Lagoon, it’s still an action series. Awesome gunfights and violence are backed by exceptional animation to make every fight an intense romp. It’s graphic violence is reminiscent of Quentin Tarantino movies and often pays tribute to them. The characters of Black Lagoon aren’t limited to just guns, oh no, you’ll see rockets, helicopters, boats, grenades, and just about every other way to destroy someone as you can think up. The action scenes are generally used to showcase the awesomeness that is Revy’s killing power. After finishing this series it becomes clear that she’s likely the most badass woman to ever hit anime.

The second season especially focuses on the gun slinging more than anything. You’ll see maids with guns, Neo-Nazis, Colombian cartels, the Russian mob, and “The Church of Violence.” Not to mention a few pseudo supernatural characters too, just to mix things up. It almost falls into the girls with guns category as all of the most weapon savvy characters are female. Black Lagoon is absolutely worth checking out for anyone into action anime or anyone who likes strong female protagonists. And best of, like everything featured here on “Why Haven’t You Seen It?” it’s completely free.

Go empty a clip with Lagoon Company: Check it out!

If you missed last week: FLCL