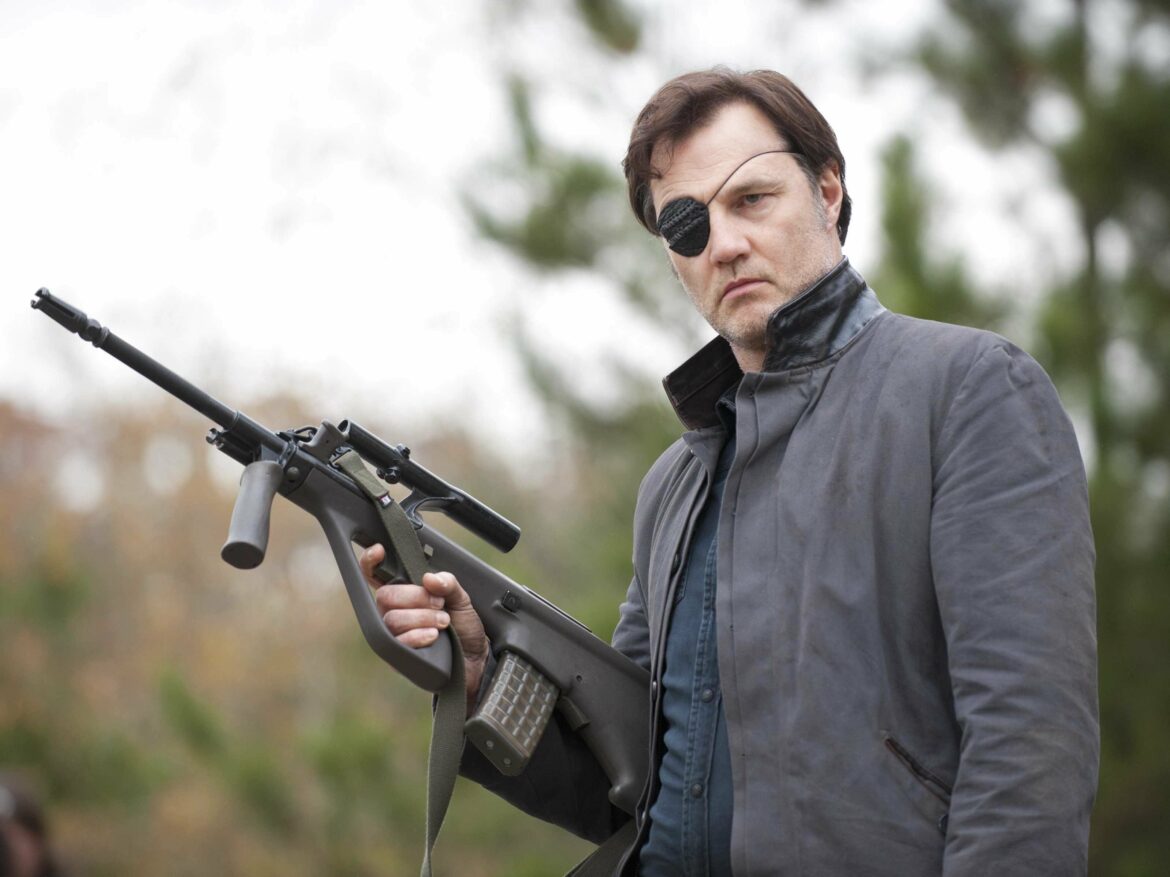 Last week’s episode of The Walking Dead offered plenty of thrills and chills. Hershel had his hands full with the madness going on with the sickness in the prison, Rick returned from his latest scavenger hunt (without Carol, of course), and Daryl and his crew finally arrived with the desperately needed medication. And that wasn’t even the most exciting bit of the episode. You know exactly what I’m talking about. The Governor made his much-anticipated return in the last moments of episode five. Just what has our favorite sadistic madman been doing all these months? Find out on this week’s recap of AMC’s The Walking Dead. 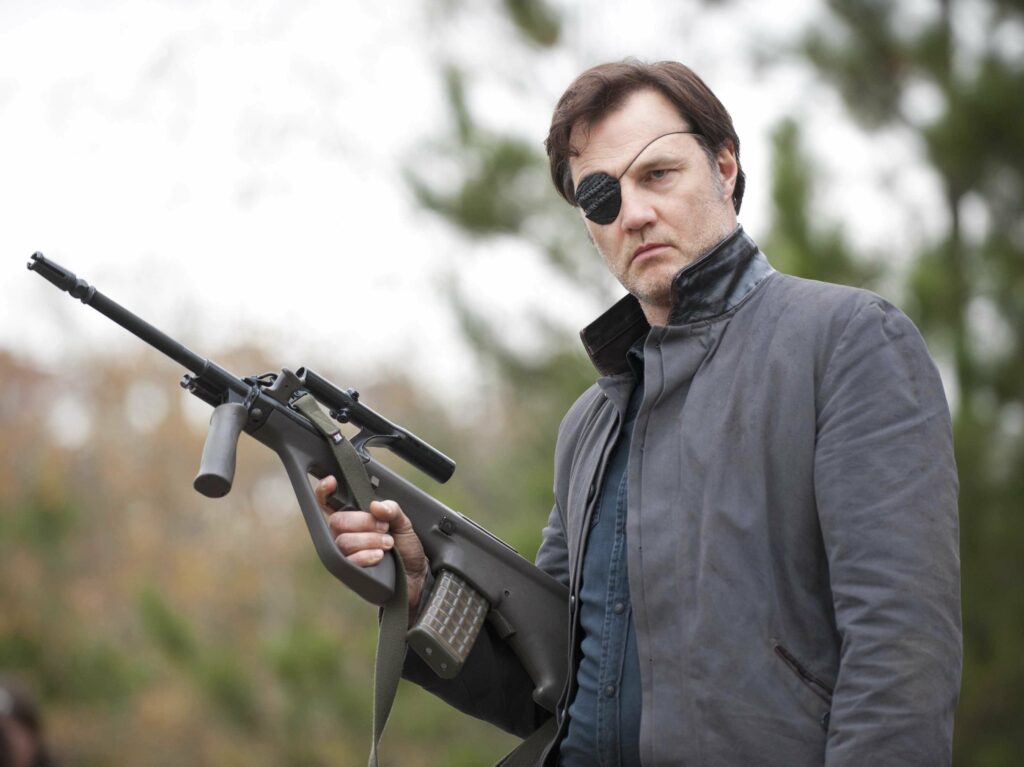 If anyone was curious about what the Governor has been up to since we last saw him at the end of season four, all their questions were answered on Sunday. Episode six opens at the scene of the Governor’s last breakdown, when he cut down his own people before taking off with his last two cohorts, Martinez and Bowman.

Believe it or not, but the series seems to want us to believe that Phillip (a.k.a. The Governor) is overcome with shame and guilt with his recent actions. With the weight of all his wicked deeds resting on his poor little shoulders, Phillip stares at his campfire later that night in a sort of trance as a Walker slowly ambles toward him. In fact, it’s Martinez (who wears a look of disgust for his old boss) that arrives at the last minute to take the Walker out. Whether Phillip notices his close call with the Walker or Martinez saving his life isn’t clear. The Governor simply continues to watch his fire as if he hadn’t nearly just become a Walker biscuit.

The following morning, Phillip awakens to find that the last two men loyal to him have deserted. Who could blame them? The dude had been on the edge of insanity for several weeks. The recent massacre of Woodbury’s soldiers sealed the deal, leaving Martinez and Bowman to get the heck out of Dodge before the Governor’s psychosis spilled onto them.

In response to everything that had happened, Phillip returns to a now-empty Woodbury and burns what is left of the town to the ground.

Scenes of an overgrown Georgia flips across the screen as the Governor’s voice explains his wanderings to an unseen woman. He explains that he was in a town, to which the woman responds by asking if there were any monsters (she means Walkers, of course). Phillip explains that there was order in the town, that it was “full of good people.”

The woman asks what happened to the town, and we get the first concrete evidence that Phillip is overwhelmed with shame. “He just…lost it.” he tells the woman with a guilty whisper. “The man in charge.”

We then see an extremely disheveled Phillip sauntering along a lonely road. Given the state of his nappy hair, overgrown beard and ratty clothes, it’s evident that it has been months since he was abandoned. Shuffling along much like the Walkers, he is barely distinguishable from the undead sharing the streets with him. If it weren’t for the familiar eye patch, Phillip would be unrecognizable.

Finally collapsing on the street, Phillip noticing a little girl watching him from a nearby apartment window. The girl bearing a striking resemblance to his dead daughter Penny, the Governor rises from the ground and journeys into the building.

After finishing recounting his tale to the two woman, it’s evident that Phillip has no fight left in him. He sits at a candlelit table with Lilly and Tara, ignoring questions from the former and cheap shots from the latter. Phillips learns that the four survivors have been holed up in the small apartment since the outbreak first began more than a year before. Lilly is a nurse, Tara claims to be a police officer, David is dying of Stage-IV lung cancer, and Meghan refuses to eat and barely says a word.

Clear that they won’t get much more from an apparently shell-shocked Phillip, they allow Phillip to spend the night in a neighboring apartment. Foul-mouthed and tomboyish, Tara makes it clear than any funny business from the Governor will result in her busting a cap in him. Still, Phillip offers little response. Offering his name as one he saw painted on the side of a building (Brian Heriot), Phillip takes up temporary residence in an empty apartment across the hall.

Enjoying a fancy dinner of what appears to be canned cat food, Phillip hears a soft knock at the door. Lilly has brought him a heaping bowl of spaghetti-Os. Mustering up a weak thank you, Phillip accepts the meal. Lilly leaves, then Phillip tosses the classically delicious spaghetti-Os out the window.

Across the hall, Lilly and Tara hear a noise outside their own door. Upon investigating, Tara finds Phillip returning Lilly’s empty plate. Ordering the man to clean the dish himself, Tara invites the Governor back into their place, where Phillip helps David to bed.

Alone with the old man in his bedroom, Phillip is asked to retrieve a board game from an apartment upstairs. David explains that it is for his granddaughter, who is struggling with the reality of what is going on in the world. Surely want to do pay a penance for his sins, Phillip silently accepts the mission.

Upstairs, the searches the abandoned apartment. Along with a backgammon board, Phillip finds several rounds of ammunition and revolver left from the apartment owner’s ill-fated suicide attempt. Pocketing the revolver and its ammo, the Governor returns to the apartment downstairs to deliver the game board.

Receiving a warm handshake in return from the old man, Phillip heads back to his own apartment for the night. There he looks at the tattered picture of his family. Disgusted with himself, he folds back the portion of the photograph containing himself.

Awakened by Lilly the following morning (who notices the photograph on a nearby table), Phillip refuses to accept the return of his gun. After seeing that Phillip has found a new weapon, Lilly accepts the Governor’s Beretta and pockets it. Gathering his things for the road, Phillip explains that the Biters need to be shot in the head to completely finish them off. Then he is requested to fulfill another mission, this time by for Lilly – retrieve more oxygen from a nearby retirement home.

Still exhibiting an uncharacteristic virtue of generosity, Phillip travels to the old folk’s home to recover the oxygen. Weaving stealthily through the deserted facility (and, for some reason, careful not to kill any Walkers), Phillip discovers the Holy Grail of oxygen tanks. But the Walkers suddenly awaken and converge on the unexpected do-gooder. With the Walkers nipping at his heels, Phillip grabs two tanks of oxygen before fleeing for his life.

Winded and bleeding, Phillip returns with the oxygen then hastily heads back to his own apartment. Lilly follows, thanking Phillip for the plunder and seeing to his wound. While cleaning the cut on the Governor’s head, Lilly explains that Meghan’s father left them three years ago and that the little girl believed Phillip to be her father returned when she saw him from the window the day before.

This naturally cues the arrival of Meghan, who watches her mother nurse the Governor’s head wound. When Lilly leaves to retrieve more tools to address Phillip’s wound, Meghan and the Governor are left alone. Phillip attempts to remain impassive as the little girl questions him about his eye, but the man’s heart is softened with the girl’s uncanny resemblance to his daughter. He jokes with Meghan, and the pair share a smile together. Then Phillip opens up a bit more, explaining that he lost his eyes trying to protect someone he loves. When Meghan asks if the one he loved got hurt as well, Phillip says yes.

Either because of his good deeds, his connection with Meghan, or a combination of other things, Phillip becomes an integral part of the small group of apartment survivors. Back to his clean-cut and clean-shaven self, the Governor teaches Meghan to play chess while Lilly and Tara deal with their dying father. Knowing what happens when one dies, Phillip keeps a close eye on what is going in the old man’s bedroom. When David finally passes, they join Lilly and Tara in to give their final farewells. But Phillip knows what need to be done. Worried that the old man will return and harm the girls he has come to care for, the Governor closely supervises the final goodbyes.

Everyone knew it wouldn’t be so easy. As the girls weep over the old man’s body, David reawakens and grabs hold of Tara. His Walker-killing instincts kicking into high gear, Philip quickly jumps to action. With the old man’s oxygen tank, the Governor smashes the Walker’s skull in plain view of the old man’s loved ones.

After burying David’s body in the ground, Phillip returns to find Meghan recoil from his presence, which visibly hurts the man. He returns to his apartment, gathers his things, and prepares to leave. Not before giving a final hasta la vista to Lilly, who insists that the man take them all with him.

Taking David’s old delivery truck, the group heads out onto the open road, still unsure of exactly where they are going. Tara admits that she lied about being a cop, apologizing for her dishonestly. She then asks Phillip is he truly believes they can make it, which the Governor confidently confirms.

The group makes camp for the night, but Meghan is still keeping a safe distance from Phillip. Lilly assures him that the little girl just needs time, but Phillip isn’t so sure. Sleeping in the truck that night, Lilly succumbs to the rugged handsomeness of the Governor and the two do the dirty mere inches from where Meghan and Tara sleep.

Problems for the Governor and Family

Typical of the show, one good thing inevitably brings a few bad things. After a night of what was surely fun for Phillip and Lilly, the group awakens to a truck that won’t start. That’s only the beginnings of their trouble. Lugging everything they own in search for a new car, Tara trips and twists her foot. Then Phillip’s senses begin to alert him of danger, which turns out to be a herd of Walkers heading in their direction.

Ordering the girls to drop their things and flee, the group runs from the approaching threat. Everyone except for Meghan, who clutches her doll and freezes with fear. His fatherly instincts returning to him, Phillip opens his arms and calls for Meghan. The little girl runs to the man’s open arms, giving audiences a significant “aw” moment before the four survivors run for their lives.

But they’re not out of trouble just yet. Phillip falls into a conveniently placed trench that just happens to be filled with Walkers. With Meghan in danger, Phillip turns Hulk, literally tearing the Walkers apart with his bare hands. The threat eliminated and the little girl safe, the Governor promises that he will never let anything happen to her. Then he looks up to find Martinez looking down at him from above the trench. With this, episode six abruptly ends.