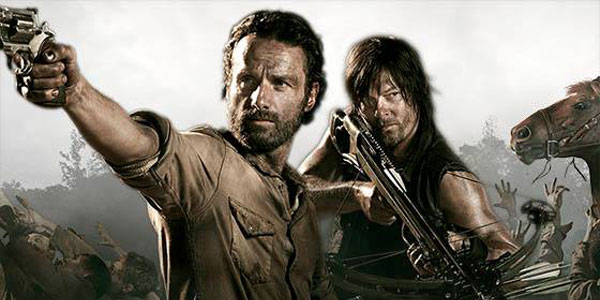 After months of anticipation and weeks of counting down to its premiere, The Walking Dead finally made its grisly return to television on Sunday night. Did the fourth season’s first episode live up to the expectations of the millions of fans who eagerly awaited the arrival of Rick Grimes and company? Take a gander below at what happened in the premiere and decide for yourselves.

Unlike the third season premiere, which opened with a riveting action sequence, the fourth season began with, well, something a bit less gripping – Rick farming in the prison yard.

Sure, it wasn’t the spellbinding sort of material that fans have come to expect from AMC’s award-winning series, but the scene was meant to make a bigger statement. Rick has been able to organize peace and order for his group. Their initial goal of cultivating the open lawns for crops has been realized. They have even built several corrals and stables for a variety of farm animals.

Rick appears to have gotten over his bouts of twisted hallucinations and seems to enjoy a sense of serenity in farming (even if he needs music and earphones to drown out the constant sound of Walkers moaning and groaning as they pool at the prison’s perimeter). Carl has grown several inches and has done away with Rick’s old sheriff’s deputy hat, electing instead to show off his long, wavy locks. Daryl is still his same old self, though both he and his trusty crossbow seem to have garnered the respect and admiration of many new faces within the camp. Carol has somehow maintained the same close-cropped haircut as the previous seasons, and the flirtatious connection she and Daryl share seems to still be present. Glenn and Maggie are still together, and Maggie is still too hot for Glenn. Hershel, who lost his leg in Season 3 due to a Walker bite (and Rick’s fast-thinking hatchet-amputation), has developed a sort of steel version of a prosthetic leg and no longer requires crutches. Beth is pretty much the same, except the awkward romance between her and Carl has been shifted toward Zach, a newcomer that is actually close to the cute blonde’s age. And finally there’s Michonne, who enjoys a sort of lone-wolf/part-of-the-group hybrid status and seems permitted to come and go as she pleases.

Aside from the survivors of Woodbury, who joined the prison community at the end of Season 3, Rick’s group has added several more people to their ranks, all of whom have seemingly been rescued during the group’s routine scouting adventures. Tyreese and Sasha (the brother/sister duo introduced in Season 3) have become valuable members of the group. Tyreese has formed a romance with one of the other survivors while Sasha has transitioned into somewhat of a decision-maker with the scavenger parties.

Things definitely seem to be going well for Rick and his people, but, naturally, things can’t stay perfect forever, can they? The Walkers gathering at the fences is an ongoing issue for the camp, one that is dealt with every day with no concrete solution in sight. At least one of the pigs the group has collected seems to be sick, though what causes its ailment is left up to imagination as the survivors busy themselves with their usual daily tasks.

As the group assigns missions for the day, Michonne returns riding one of the horses. It’s not clear exactly what she has been up to or how long she has been gone, but she has returned to stay “for a while,” offering gifts of comic books to Carl and news for Daryl that she still hasn’t located “him,” which can only be presumed to mean the villainous Governor from Season 3 (who disappeared with more than just Michonne and Daryl craving to kill him).

Daryl leads a group to scavenge for supplies while Rick checks the various snares and traps in the woods surrounding the prison. Here is where we finally get into the nitty-gritty of the premiere.

Comprising of Daryl, Glenn, Michonne, Tyreese, Sasha and newcomers Zach and Bob (a supposed ex-military medic whose eagerness to help shows), a rummaging party sets its sights on a local department store to scavenge for supplies. Demonstrating the same expertise as in the previous season, the group eliminates all the Walkers present with extreme aggression. Unbeknownst to them, however, is the crashed helicopter and herd of Walkers hanging out right above their heads on the roof. Nevertheless, the forage seems to progress smoothly. At least until old Bob messes things up.

Causing a major ruckus in the store, Bob inadvertently causes a shelf of liquor to come crashing down around his feet, pinning him between the shelves and the floor and alerting the hoard of rotting zombies on the roof of the group’s presence.

At first, everything appears fine. The rest of the party arrives to the aid of Bob, whose only seriously injury is perhaps the wound to his pride. Then the zombie excrement really hits the fan. Under the weight of crashed helicopter and roaming Walkers, the roof begins to give way, raining zombies down onto the survivors in the store. Caught by surprise, the group struggles to free Bob from the fallen shelves while dealing with the storm of falling corpses. Just when you think everyone in the group will get out of the situation in one piece, Zach gets his leg chomped by a Walker, falling to the ground as he becomes the main course of the zombies’ feeding frenzy.

Meanwhile, Rick deals with his own little dilemma. While out collecting game from the array of snares, Rick comes face-to-face with another human (well, sort of). It turns out to be a living woman, though her skin and clothing are so filthy that she’s practically indistinguishable from the Walkers. She pleads to Rick for help, begging that he allow both her and Eddie (her absent husband) to join his camp. Promising that he won’t tolerate duplicity, Rick agrees to allow the woman and her husband to access to his camp, but only after they each answer three questions to his satisfaction. Eager to join Rick at the prison, the woman complies with Rick’s stipulation and the pair make their way back to Eddie.

Back at the prison, a glimpse of day-to-day life in the shoes of the everyday survivor is revealed. Most likely on Rick’s orders (given that his own son has become a ruthless killer), the children of the prison are afforded with the closest thing to normal childhood as possible. They seem to have freedom to explore the prison grounds and entertain themselves as they see fit (zombie-naming, anyone?). They even have a daily time slot during which Carol treats them with a story from one of the books in the prison’s library. Although Carl considers himself above the daily activities of the other children, he sneaks into the library to secretly attend story time. Here he witnesses Carol straying from the standard curriculum, teaching the other children about knives and survival instead of Legos and play dates.

Fresh off the heels of the latest disaster, the scavenger party returns to the prison both empty-handed and in low spirits due to the loss of Zach. Tyreese vents his emotions to his prison crush and Daryl gets the unenviable task of informing Beth that her boyfriend-of-sorts has bitten the dust. Bob seems to take the situation the worst, however, as he surely blames himself for causing the commotion that led to Zach’s unfortunate demise.

Rick and the mysterious woman in the woods arrive back at her camp. All seems normal until the woman beelines to a small sack, proceeding to refer to it as “Eddie.” Rick takes his eyes off the woman to survey the empty campsite, to have the woman suddenly lunge at him with a blade. The true, sick nature of the situation is suddenly clear: the woman was drawing Rick to her camp to kill and feed him to her husband-turned-Walker Eddie, who appears to be nothing but a chomping head in a rucksack. Angry that the woman deceived him, Rick draws his gun. However, pity in the woman’s desperation keeps him from killing her. Instead, she thrusts her own knife into her gut, begging Rick to let her return as a Walker so she can be reunited with her husband. As she lay dying, she asks Rick about the three questions he had intended to ask. Rick answers by asking her (1) how many Walkers she has killed, (2) how many people she has killed, and (3) why she killed those people. After the woman dies, Rick heads back to the prison, leaving both the woman and her husband “alive” as Walkers.

It seems as though almost everyone has something to reflect on back at the prison that evening, but that’s not the most captivating scene of the premiere’s ending. What is most riveting is what goes down with Patrick, yet another young newcomer introduced at the beginning of the episode. Very little is revealed about who Patrick is and how he came to be at the prison, but it’s obvious that he’s considered one of the children (even though the actor who plays him is in his early-twenties). He even participates in the reading hour with the other children early in the episode, at least until he bails out with a sudden bout of nausea. And it’s that nausea that leads to the aforementioned captivating scene. Patrick awakens covered in sweat and heads to the showers to cool down. Here his sickness takes a turn for the worst. Patrick suddenly falls to the floor, bleeding from his facial orifices, apparently dead. Thus ends Season 4’s premiere.

It’s difficult to say that the premiere wasn’t enjoyable given that it’s the first new episode since the end of last season, but it’s also difficult to say that the premiere wasn’t lacking. There were definitely moments that were intriguing, but nothing topped the whole deal with Patrick, and nothing left a more profound question for the fans. It’s easy to assume that Patrick is going to return as a Walker and cause all hell to break loose in the prison. What’s a little more difficult to guess is whether it was a natural illness that killed Patrick or something to do with the Walker virus that was revealed to exist in everyone. If the latter is the explanation, then both we as viewers along with the survivors on the show have more important things to worry about than a mediocre premiere.

Remember to visit each week for recaps and discussions of each episode as the season progresses!