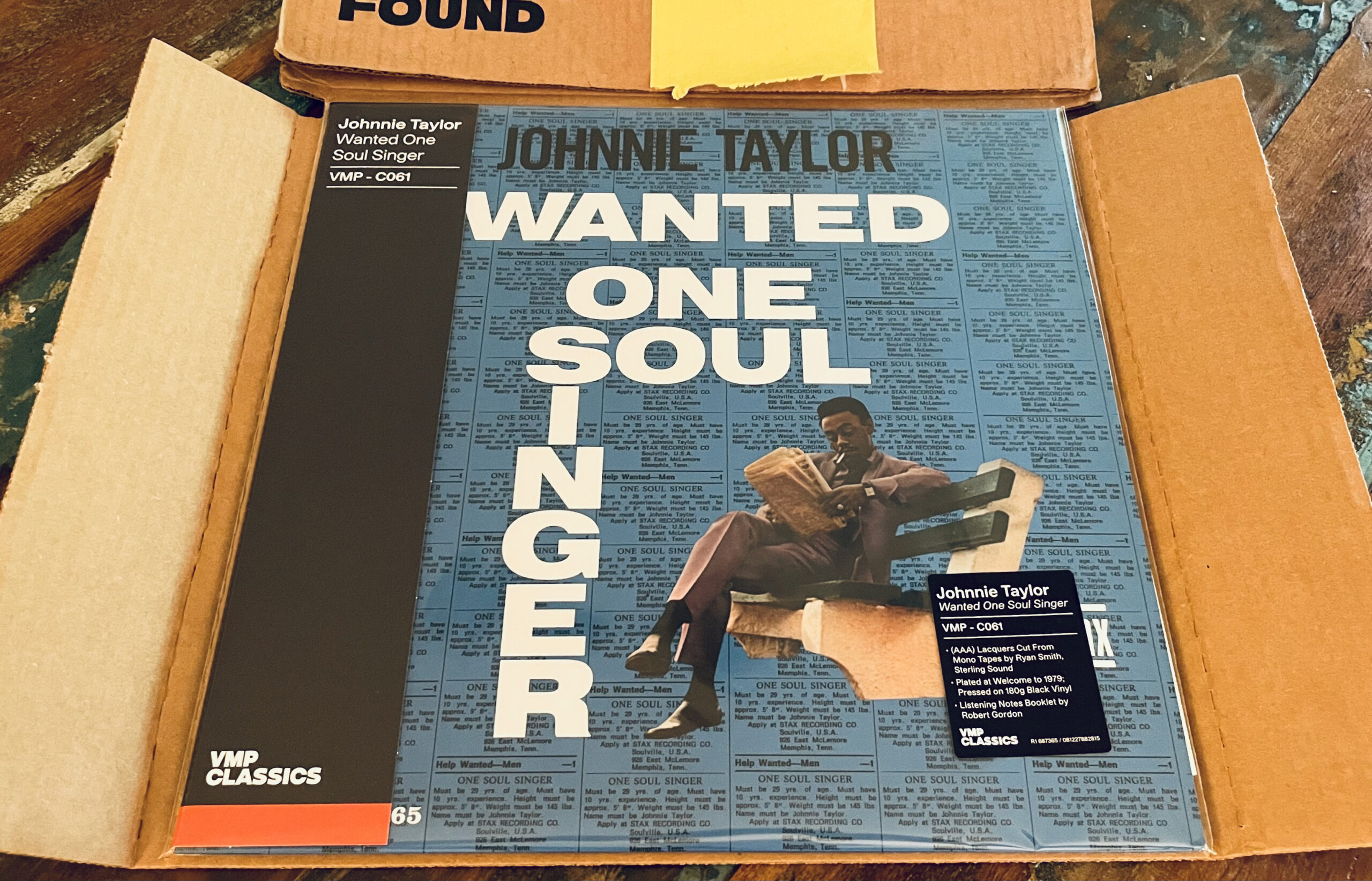 You’ll have membership privileges in the VMP store too, which means you can grab a copy of previous VMP selections from the archives – including May’s immaculate Classics track re-issue of Here is Phineas, by jazz legend Phineas Newborn Jr. – or choose from a slate of super-limited releases pressed exclusively for Vinyl Me, Please. The store is open, and Team VMP are dropping fresh new selections to their stock every single week. Do not miss out.

As for June, well, the VMP Classics team pulled a legit diamond from the Stax vaults with Johnnie Taylor’s Wanted One Soul Singer. Here’s a look.

For The Love Of Music, Please DO NOT BEND (or, how I learned to go full swap anytime a Stax album hits the Classics track)

I’m in slightly rarified territory here as I don’t know if I’ve ever gone three Swaps in a row with Vinyl Me, Please. Yet here we are. Rest assured, that’s not a reflection of the latest string of VMP Essentials picks. And to be clear, I’m a big fan of the June Essentials selection, Justice’s oh-so dancey electronic beast †. Rather, it’s a reflection of just how bloody amazing the featured Classics albums have been of late. And yes, the Classics team made one of their best picks yet with Johnnie Taylor’s Stax debut.

Now, if you’re a casual fan of Stax Records, there are a handful of names one ineffably acquaints with the legendary soul label. Among them are the likes of Carla Thomas, Isaac Hayes, Booker T. & the M.G.’sSam & Dave, and, of course, the immortal Otis Redding. Stax diehards, however, would almost certainly throw Johnnie Taylor’s name into the mix. And they’re right to do so as the former gospel/doo-wap singer became one of the iconic label’s biggest stars when he joined the Stax soul fold.

Like every Stax star, that was in no small part due to his collaborating with the label’s astonishing trove of dedicated talent, including legendary songwriters Isaac Hayes and Dave Porter, Booker T. Jones and the Stax house band, and an in-house production crew who rarely made a misstep in the booth. Taylor had, of course, had success on the soul scene prior to aligning with Stax. But with those collaborators on board, his singing soul career hit legitimately exploded. He’s even credited as one of the key players in keeping Stax alive after the tragic death of its biggest star, Otis Redding.

Released roughly a year after Redding’s death, Wanted One Soul Singer was Johnnie Taylor’s first album for the label. It arguably remains his best. And it’s clear from opening track “I Got to Love Somebody’s Baby” that Johnnie had not only found a home in the hallowed halls of Stax, but the label had indeed found the soul man they needed to carry on. As the album unfolds, that becomes even more obvious, with Taylor and the Stax players cranking out soulful ballads, and down & dirty dance numbers with astonishing ease.

Wanted One Soul Singer so wholly embodied the heart and soul of Stax, Taylor seemed ticketed to the same sort of stardom as Otis Redding. He somehow never quite reached the same heights, but his legacy in the annals of Stax history remains every bit as important. And yes, his output for the label is arguably second only to Redding himself.

Oh nothing to see here, just one of the greatest singers Stax Records ever produced searching the want ads for his next gig.

There’s a full track list, an album credits on the back… right next to Johnnie’s application to become a Stax man.

And if that stamp isn’t enough of a status-sealer, the hype sticker should more than confirm this pressing of Wanted One Soul Singer‘s station as the only one you’ll ever need.

That’s not the only sticker in the box, however. And the word “cute” doesn’t begin to describe this dino-inspired VMP contest winner from Maxim Bandenbriele.

This month’s release also came with a snazzy button. And I really cannot tell you how solid that advice is.

There are some important stats on the OBI-strip cradling the album’s spine, by the way. And hard as it might be to believe, Johnnie Taylor’s Wanted one Soul Singer is indeed the 61st edition of the VMP Classics track. Flip it over, and you’ll find an excerpt from the album’s listening companion as well.

As for the listening companion booklet, it’s a fascinating read from Memphis music scene guru Robert Gordon that tracks Johnny Taylor’s ascension Stax Records royalty, and how Wanted One Soul Singer put him on that track.

Lest we forget, there is a record inside that dust sleeve. And it’s another sleek pressing decked in all black – just like a Classics pick should be.

And yes, it’s gonna bring some serious soul to any deck it touches.

How’s it sound? Like hearing songs from a man who poured his heart and soul into a blender, and had them pressed directly into the wax that made your record.

The hunt is undoubtedly one of the true joys of being a vinyl collector. But the thing of it is, you can go out and hit one record store a week for the rest of your life in search of album’s like Johnny Taylor’s Wanted One Soul Singer, and still never find a single copy, let alone one that’s actually playable. While I’d never ask a true collector to give up the hunt, I can tell you the VMP Classics subscription is one of the best ways to get your hands on copies of hard to find albums that are not just playable, but month-in/month-out just sound fucking fantastic no matter where they are pressed.

That really is the highest endorsement a vinyl fan can give. And I give it with full confidence. Thanks to Team VMP for keeping the Classics train running, and thus helping all us hunters find the vinyl treasures we’re looking for… and even a few we didn’t know we needed.