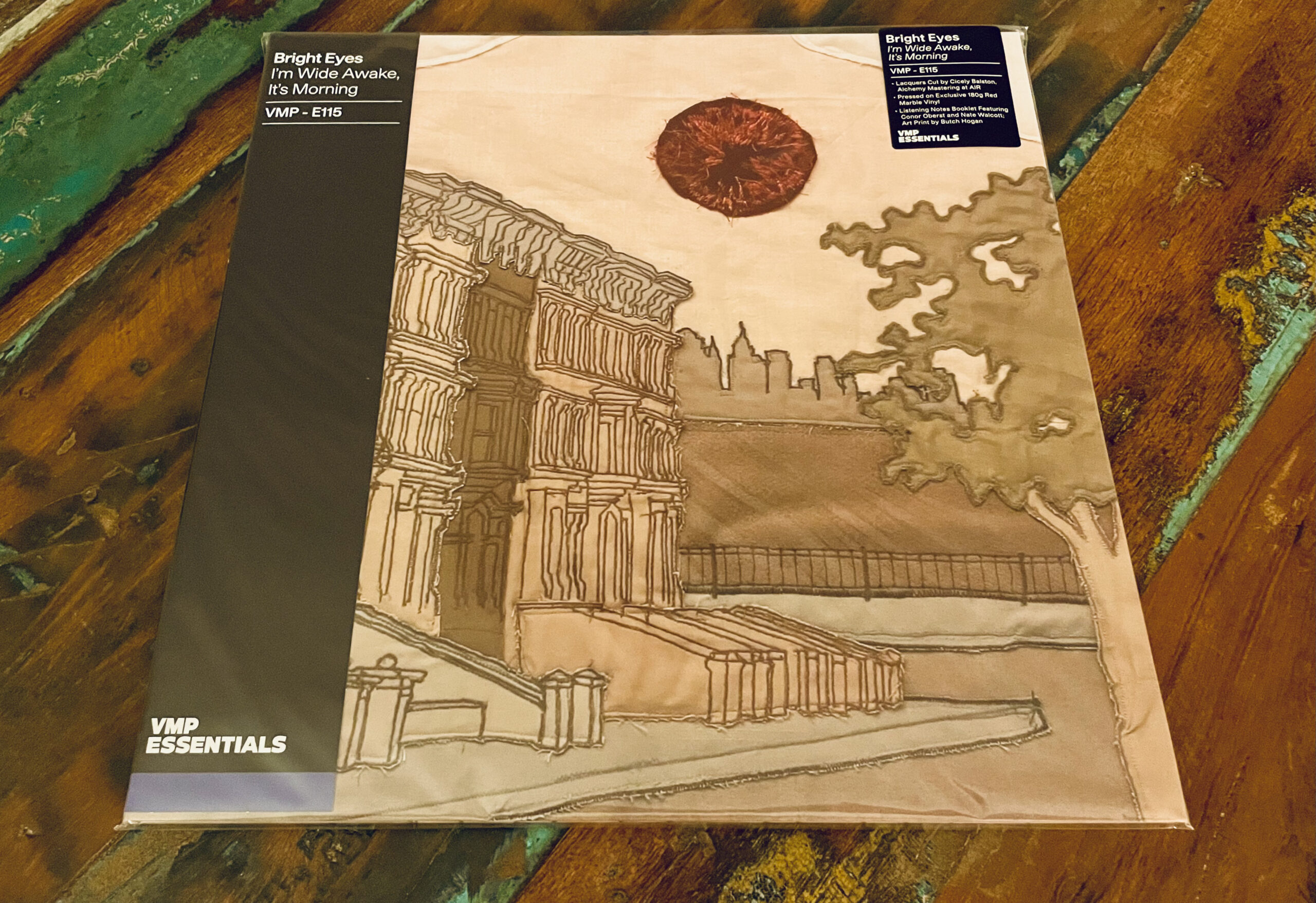 You’ll have membership privileges in the VMP store too, which means you can grab a copy of previous VMP selections from the archives – including June’s funky Classics selection Wanted One Soul Singer, from Stax Records standout Johnnie Taylor. – or choose from a slate of super-limited releases pressed exclusively for Vinyl Me, Please. The store is open, and Team VMP are dropping fresh new selections to their stock every single week. Do not miss out.

As for July’s box, Vinyl Me, Please is bringing some feels to midsummer with a glorious reissue of Bright Eyes’ I’m Wide Awake It’s Morning. Let’s have a look.

There were not many bands on the early-2000s indie rock scene quite as divisive as Bright Eyes. The brainchild of Midwestern son Conor Oberst, Bright Eyes seen in certain circles as a band fronted by a pretentious, former emo kid who’d turned his angsty schtick in to folk rock fury. For others, including myself, he felt like the second-coming of Bob Dylan – i.e. an artist capable of crafting catchy, deeply introspective songs that could move listeners mind, body, and soul.

Frankly, when Oberst was on his A-game, the latter viewpoint was hard to argue. And he was very much on his A-game when recording 2005’s I’m Wide Awake It’s Morning. Released three years after their breakout album Lifted or The Story is in The Soil, Keep Your Ear to the Ground (my personal favorite from the band’s catalogue), I’m Wide Awake It’s Morning found Oberst and bandmates Mike Mogis (who also produced) & Nate Walcott stripping their intricate sound back for a more straightforward approach, doing so with the intent of crafting a spirited, no-nonsense folk record largely recorded live in studio.

That’s essentially what the band did, though there is a definite indie rock vibe to the album as a whole. Bright Eyes was, after all, an integral part of that world in their early days. Nonetheless, I’m Wide Awake It’s Morning is a moody little folk record at heart, with Oberst and company delivering 10 soul-stirring ear-benders more akin to the sounds of the late-60s Topanga Valley scene than the ’00s indie set.

On Oberst’s watch, those songs unfold with a confessional poeticism songwriters twice his age tend to lack, conjuring tales of good nights, bad mornings, and all the dodgy moments that accompany each. The Bright Eyes frontman fills each with the literary aplomb of a short story, spinning immersive narratives full of colorful characters, immaculately detailed locales, and resonant emotional specificity. As such, I’m Wide Awake It’s Morning doesn’t just demand repeat listens, but thoroughly rewards listeners who crack its sonic spine for second, third, and/or tenth times.

At this point, even casual Bright Eyes fans are likely familiar with minor hits like the soulfully meandering “Lua,” or Oberst’s heart-rending, in-love-with-love ballad “First Day of My Life.” But if you’ve yet to venture past those album standouts, I’d implore you to dig deeper into this album, ’cause there’s not a bad apple in the batch. And as far as the album’s folky late-70s vibes, if you know anything about that era you know such music is best experienced on the vinyl format. So too is I’m Wide Awake It’s Morning. And it’s arguably never sounded better than it does here.

There’s a decidedly home-grown feel to pretty much every album Bright Eyes has ever released. So yeah, this hand-stiched sort of city-scape collage thing is perfect for the band’s most New York-centric release.

It’s also adorning a well-crafted, tip-on gatefold, by the way.

That collage work stretches all the way to the rear cover too… which is precisely where you’ll find the VMP Essentials foil stamp cementing I’m Wide Awake It’s Morning‘s status as a must-have for any music fan.

The hype sticker more than makes clear why this pressing of the album is the pressing your collection needs too.

You’ll find another sticker tucked inside every delivery too as the Vinyl Me, Please sticker design contest is still in full swing. This music loving Toucan from VMP subscriber Coco M. is not my personal favorite of the lot so far, but it’s a suitable selection for a bit of Summer fun.

Protecting the spine of each album is an informative little OBI-strip, denoting the place of this Bright Eyes classic in the VMP vaults, and sporting an outtake from the listening companion booklet to boot.

As for that listening companion book, it’s chock full of tales from the recording of I’m Wide Awake It’s Morning straight from the mouth of Bright Eyes frontman Conor Oberst and the band. And yes, there’s a full breakdown of the album’s lyrics in there too.

It’s been a while since I’ve covered an Essentials pick, so you may need reminding that each one comes with it’s own album-inspired art print. This month’s is an era-specific pic from Mr. Butch Hogan. And it’s a proper document of the rambling energy Bright Eyes was bringing to the stage back the proverbial day.

There is, of course, also a record tucked away inside that gatefold. And this red marbled beauty is a true sight to behold. And yes, it brilliantly mirrors the red sun adorning the album’s cover.

Needless to say, it’s gonna dress up your deck in ways that cannot be described in mere words.

How’s it sound? Like thumbing through the personal journals of a long-forgotten poet as a band plays rollicking folk tunes in the room next door.

As VMP has aged, and the vinyl game has once-again become the game in physical media, it’s understandably been a bit harder to live up to that “Lost Sounds Found” mantra. As such the service has notably been picking bigger albums from bigger bands on the Essentials track in recent years. They’ve remained exceedingly adept, however, at knowing both which big albums to choose, and which bands to partner with.

It might be unfair to claim Bright Eyes, or their 2005 masterpiece big to exist on the same level as recent blockbuster Essentials picks from Aaliyah, or Usher, or even A Tribe Called Quest. But if you’re an indie rock fan who cut their teeth on the scene in the early 2000s, I’m Wide Awake It’s Morning was undoubtedly a major album for you. I’d even wager this timeless release is just as important to you today as it was back then. Should that be the case, this near flawless reissue from Vinyl Me, Please is about as essential as a release can be. So make sure you grab a copy while it’s still available.