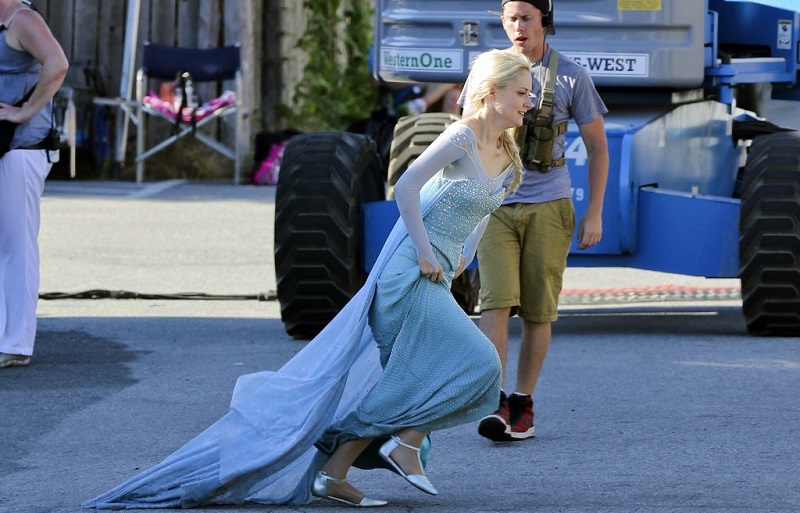 Once Upon a Time is a tricky show to fall in love with. Like many television shows with special effects, it is usually a hit or miss on how well an illusion is successfully created. There’s a lower budget than films and a much shorter deadline, and considering the format (a weekly time slot that doesn’t typically change), there’s no pushing things back if they aren’t just right.

But there’s one thing OUaT has consistently done so well that anyone with eyeballs can agree on: their costume department is out of this world. That’s why I’m going to say something right now for which a certain fandom is going to hate me: I am completely unimpressed with Elsa so far. To be fair, all we have right now are a couple shots of her walking around the lot, not really doing much. BUT. Let’s get down and dirty on costuming details.

Started at the bottom

Elsa’s shoes are boring. They’re plain silver and they look like they came off the rack at Payless. I’m not knocking payless. And if this were a cosplayer who was guaranteed to be on her feet all day, I’d have no qualms whatsoever. BUT we’re talking about an actress who can sit and take breaks. We’re talking about having a costuming assistant on hand to replace crystals that fall off or put back together any elaborate glitter situations. There’s nothing mystical or magical about plain silver Grecian sandals.

Then we move up to the skirt. Again, I will grant that so far the only available images are basically stationery backstage deals. However, the skirt looks kind of heavy to be made of ice. The color is spot on, sure, and I like that there’s a distinct pattern. But there are options out there—tons of options—for fabric that looks and feels like it’s made of delightful breaths of air. Some of the Disney wedding gowns have achieved that airy feeling of clouds brought down from the heavens and rendered into clothing. If the bridal industry can manage to manipulate tulle and organza for the sake of lightness, so can costuming at OUaT.

Finally, lets take a look at that bodice and cape. Elsa’s bodice has a very distinct pattern on it. It’s intricate and complex and a pain in the butt to anyone trying to replicate it. I realize that the characters in Once Upon a Time never wear costumes that replicate their movie counterparts exactly—or else the costumes deviate from the movie designs entirely. But what we have here is Elsa’s pale-by-comparison cousin. I am not requiring that the bodice in the show replicate the bodice in the film to every last stitch—but this costume is clearly trying to emulate the film’s costumes. Perhaps the designers did not expect the audience to recognize Elsa without her now-signature blue ice gown. Perhaps they just really liked the way the dress looked. But whatever the reasoning, the problem still stands that this bodice is missing the complexity and magic of its inspiration.

The cape suffers the same problem as the skirt. In the film, yes, they animated it specifically to defy gravity. But that means the real-world version should at the very least billow when she walks. There should be SOMETHING magical about it. I can appreciate the snowflakes on the fabric, and again the color is decent…but there’s something that just looks heavy and boring about it.

Yeah, I know—but I’ve seen it done much more successfully on cosplays and prom gowns and, again, in the Disney Bridal collection. Add that to the fact that OUaT normally has costumes so gorgeous they make me gasp (paging Regina) and Elsa’s early photos haven’t done anything for me quite yet.