The “Whose Line is it Anyway?” Reboot starting airing last month on the CW Network. Thanks to the power of the internet I’ve been able to catch up on the new version of what is one of my favorite shows of all time. The original US version ran for an impressive 8 seasons, clocking in at a hefty 219 episodes. All of which are securely within my household, and still within regular use to this day. Nothing tickles the funny bone quite like sketch based improvisational comedy…and dick jokes

It’s been 6 years since we’ve had a taste of the comical improv show known colloquially as “Whose Line”, not that they haven’t tried similar shows since its tragic cancelling. I was excited for all of these similar shows because they often featured a similar cast and format. Sadly, these shows always went belly up pretty quick after hitting the air. The failure of improv shows since Whose Line gave me a deep fear that my favorite show might come back and fail as well. Or even worse, be so changed in an attempt to appeal, that it would no longer truly be the same show.

So, how did the show hold up through it’s revival? There were three important aspects to what made Whose Lines a success: The Cast, The Format, and Ryan Stiles.

The cast is almost entirely intact from its original US version. All of the staple cast of Colin, Wayne, and Ryan return while keeping the 4th acting slot a rotating position. Even Laura Hall and Linda Taylor, who play instruments for musical games, have returned. The most notable absence is obviously Drew Carey, who is hosting Price is Right these days. Instead we have Aisha Tyler in his place, who is best known for voicing Lana on Archer.

It is truly sad that Drew Carey couldn’t be involved in the revival. His connection and friendship with the actors gave them a playful nature that you’d see between a group of male friends taking jabs at one another. To Aisha’s credit she does sneak in a few zingers, especially against Colin’s Canadian heritage. As the episodes have progressed, she has clearly become more comfortable in the position. It is probably best that they brought in a female host, as Whose Line was know for being a bit of a boys club. Even the female improv actors were regularly pushed to the side in favor of the better known male cast. Having Aisha around makes us feel a little less misogynistic when the sexist joke come around.

I’m glad to say that the format had remained largely in tact. Many of my favorite games have been on show, including: Props, Scenes From A Hat, and Dating Videos. There are even a few new editions like Sideways Scene, where the actors perform on the floor for an overhead camera. Notably absent however, are the games Hoedown and Irish Drinking Song. While the actors made it pretty well known that they all hated hoedown (especially Ryan), It was always a fan favorite. Most musical games in the new show are played entirely by Wayne, who is still the master of comedic singing imitations.

The game show style based on ‘points that don’t matter’ that Drew Carey brought to the original has faded into the back somewhat. Aisha will sometimes distribute these worthless points for a joke, but it is never done on a regular basis. Along with the missing points, they no longer bring in the host to improv as a prize for the “winner.” This is sad because it was one of the best chances we had in the original for the host and actors to take shots at one another.

If you are confused by Ryan Stiles having his own category, then you probably didn’t watch the original. Drew Carey may have been the face of Whose Line, but Ryan was its soul. He was hands down the fan favorite, and was capable of working on an almost telepathic link with other actors. Ryan was a master at pointing out flaws in the acts, and turning them into part of the act itself. Some of the improv shows following Whose Line failed to work, just because they didn’t have the magic the is Mr. Stiles. He’s back, he’s as sharp as ever, and he is a little less bitter. Having Ryan back on the cast his probably the best thing they could have done to give it a chance at success. Ryan…if you read this…I love you in the most deeply heterosexual way possible. 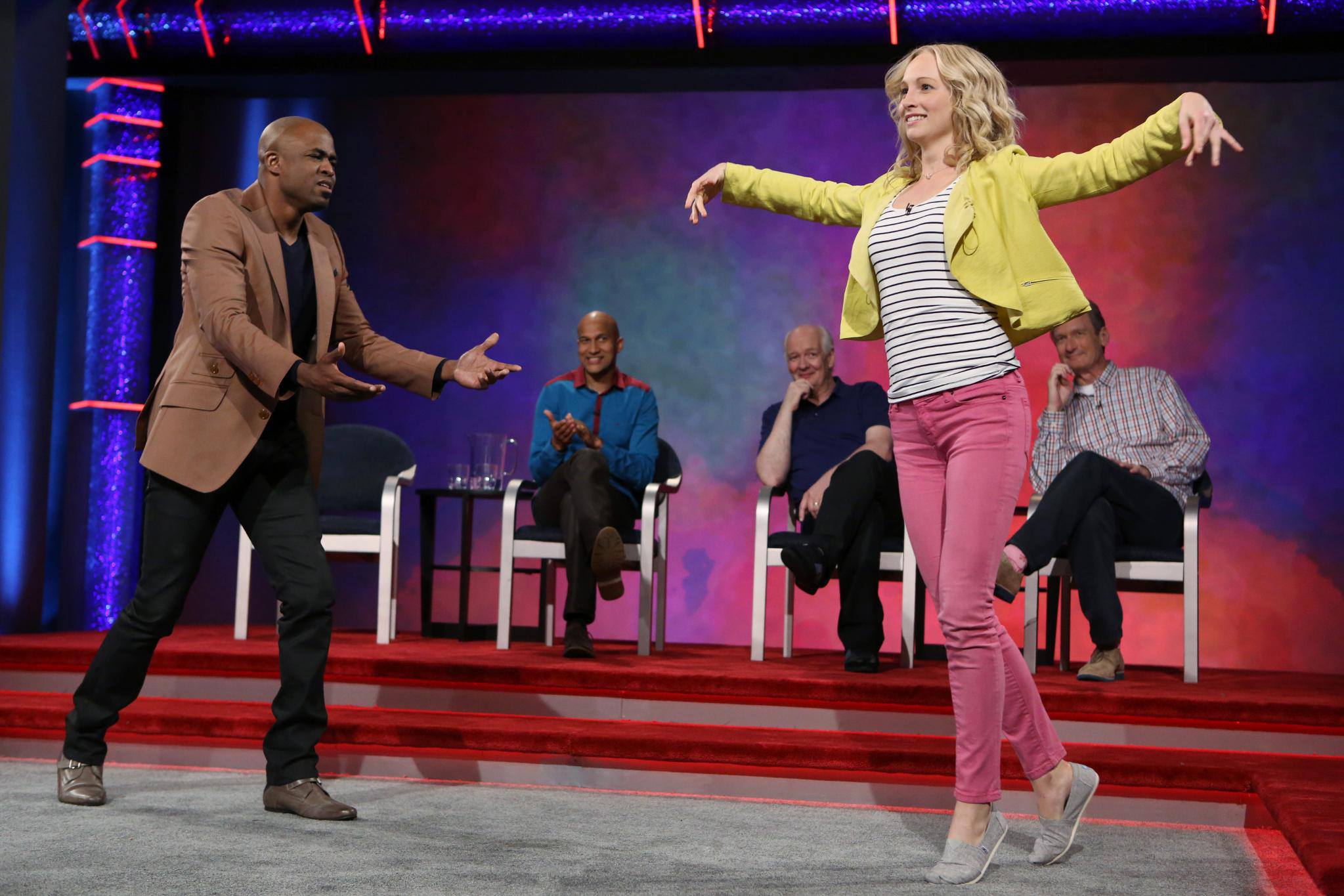 Celebrity appearances used to be a rare treat on on Whose Line. Every once in a while you’d have a well known face like Robin Williams, Whoopie Goldberg, or Stephen Colbert in the cast. It was always a nice surprise and lead to some of the best moments of the series (I’m looking at you Richard Simmons). The new show brings back the idea of celebrity guests with a vengeance. Instead of it being a rare treat, it is a facet of every single episode so far.

The problem with using celebrity guests so often, is that it is bound to be hit or miss. Using celebrities every once in a while gave the show the ability to pick guests who would be truly fun to watch. When you are looking to fill every single episode with a celebrity you are bound to run out of awesome people fast. This new celebrity gimmick has lead to some serious discrepancies in quality between episodes. Just compare the recent appearances of Kyle Richards (Real Housewives) and Kevin McHale (Glee). While McHale looked like he was genuinely having fun and tried to participate as much as possible, Richards looked genuinely disgusted during most of her appearance. If you ask me, the number of these appearances should be dropped significantly.

The new Whose Line does justice to the original US version. Thanks to the main three cast coming back there is always a good time to be had. Apparently most people agreed, since the shows has been brought on for another season of 24 episodes. You can even see the newest five episodes online at the CW website. Whether you are an old fan or hoping to become a new one, the new Whose Line is worth checking out.