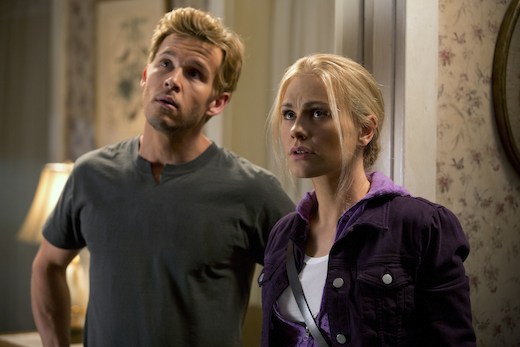 After last week’s episode, I went into last night wondering just how much crazy action we were going to see. The season opened up with several loud bangs and it seemed as if the the show’s creators understood they needed a bit of a slowdown. Had this been the kind of slowdown that filled out some character story lines or allow us to enjoy the people we have grown to know and love it would have been a very good episode. Instead, the show that is already weighed down by too many story lines added a couple more. The funny part about the episode is that the show clearly understands it has too many balls in the air. A good portion of last night was spent reminding viewers of what happened last season usually just by slapping you in the face with it.

The worst/best example of this was when Eric was pulling the newly manufactured bullet out of Tara’s leg. While they are all staring at the round that is made of silver and emits UV light. Eric’s sister points out that general Cavanaugh said the humans were making new weapons. Tara responds, “what general” and Eric says “the general I killed.” Tara then notes “dead general, got it.” I sat in silence for several seconds after this exchange wondering if I had seen a more pointless conversation, until I realized it was entirely to remind of that Eric had indeed murdered murdered a general in season 5. There are other instances like this throughout the episode and it appears that the writers underlined the dangers of having one season take place just days (or in this case a day) after the previous season ended.

Because most of the events of season 5 were supposed to have happened just 24 hours before this episode we aren’t supposed to have forgotten what happened. Because it was actually about 8 months since we saw any of this stuff go down, we forgot most of it.

After already being annoyed with the opening of this episode I was thrilled to see that Merlotte’s actually played a part in last night’s show. I complained last week that there simply wasn’t enough “regular life” in the last few seasons of what was once a great show. The writers even seem to understand this and poked a little bit of fun at themselves by having Arlene call Sookie and remind her that she has a job and she isn’t at that job.

Of course, this is also the part of the where two new plotlines are introduced to the myriad of other plotlines that are running through the series. I can’t say that I’m even remotely interested in either one. On her way to work, Sookie runs across an apparent male Fae who says he was attacked by a vampire and barely managed to escape. He sticks around just long enough to show that he and Sookie have eyes for one another and then he walks out the door. I doubt its the last we’ve seen of him, and it certainly seems like there is more to his story than he’s saying.

Rutger Hauer makes another appearance and we find that instead of being Warlow, like we were led to believe at the end of episode one, he’s actually Jason and Sookie’s fairy grandfather. He tells Sookie and Jason that he’s there to help them stop Warlow (who we saw pop through a portal on a bridge at the beginning of the episode) and explains more thoroughly why the big bad vampire is after them in the first place.

Eric, meanwhile is the only one who was really off dealing with the continuing and growing war with the humans. This was also the funniest part of the episode when the nordic giant hijacks the identity of a nerdy scientist who is at the Governor’s mansion to meet about the whooping crane. The discussion that ensues, which has a clear double meaning between Eric and the governor of Louisiana is classic True Blood and the best part so far of the new season.

Unfortunately, this part also underlines several continuity issues with this new season. I’m not sure exactly what time of year its supposed to be but its clearly warm enough for everyone to be walking around outside in short sleeves and warm weather clothes. Despite the warm climate, it is pitch dark at 5:30 PM. Just an oddity that didn’t need to be there. Why couldn’t the meeting have taken place at 6:30 or 7:30 PM?

The show also seems to forget some of its own rules when it comes to Vampire and sleeping during the day. In previous shows, it was pointed out that vampires cannot stay awake during the day. If they try they get the “bleeds” and become incredibly weak. In this episode, all the vampires we know and … love are hanging out during day with no side effects other than fatigue the same way we’d be tired if we stayed up 24 hours.

Eric’s visit to the Governor’s mansion was the best part of the season because it also further demonstrates that the humans are ready to go to war. Eric believes he has gotten the drop on the governor by glamoring, only to find out that there are new contact lenses that prevent that special type of hypnosis. Luckily for us, after Eric is captured, he manages to escape.

You might have noticed that I didn’t mention Bill’s storyline much at all. That’s because it bores me. I don’t have a real interest in Jessica or Billith and it doesn’t seem like the writers know what to do with them. Bill spent the episode catatonic, talking to Lillith inside his own head. There was a creepy little scene where he basically squeezes all of the blood out of a human while he is unconscious but other than that, I wanted to be anywhere but there whenever we saw what was going on at his house.

In all, the episode was better than episode 1, but there were still far too many holes to be as good as the first few seasons. I’m gradually losing hope that the show will be able to return to greatness.