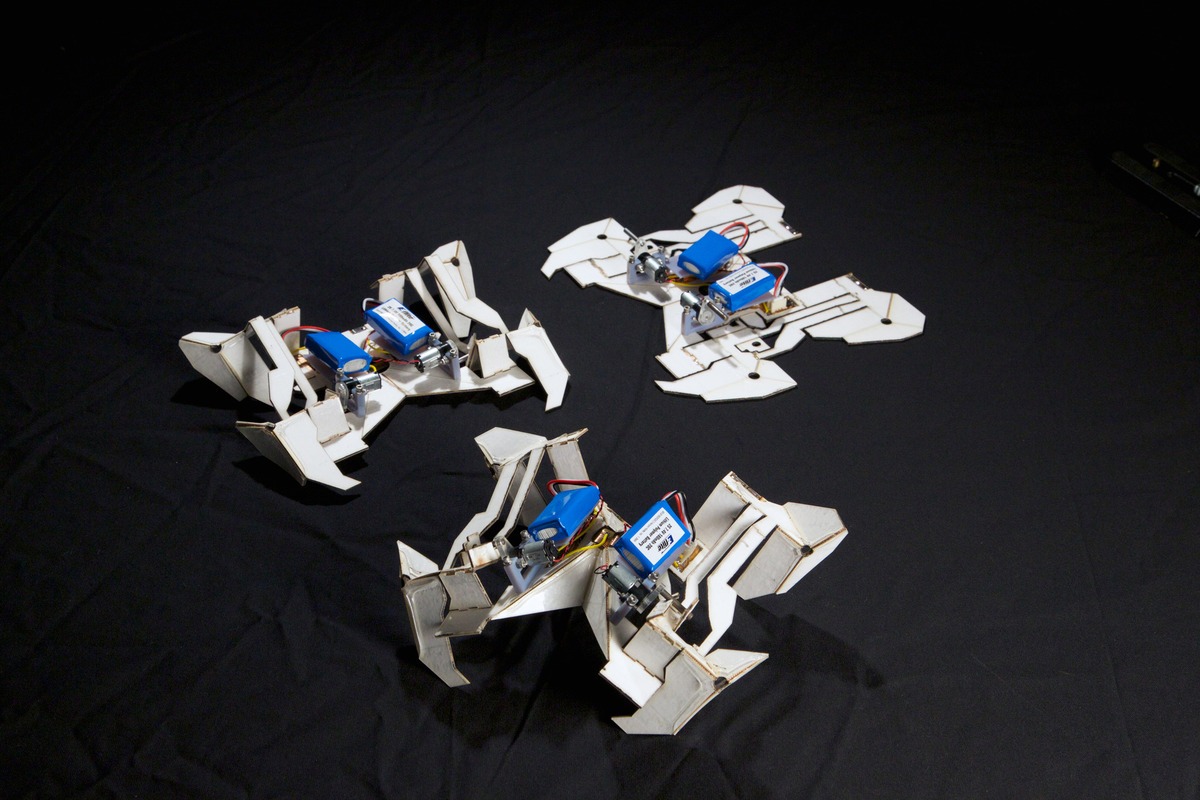 Taking inspiration from Japan (duh), children’s action figures (aww), and even the Transformers movies (no comment), researchers at MIT and Harvard have actually created machines capable of transforming themselves from little more than a sheet of paper into a fully-fledged walking automaton. That’s right. These robots are self-assembling.

Imagine how useful that technology would be if fully realized. No more ugly arguments over how to assemble the baby crib—it would just assemble itself! Or they could slip under the couch to get that dropped television remote so you don’t have to stand up and move the whole thing. And that’s small thinking. These types of robots could explore dangerous environments such as outer space (we have a veritable army of robots for that at this point, don’t we?) Harvard robotics researcher Sam Felton commented that these robots could “be as technology-changing as the three-dimensional printer.” Felton and study coauthor Daniela Rus envision a future specializing in these types of robots with stores like a “robo-Kinkos” according to Felton. People would go to these stores to purchase specialized equipment depending on their need. Like a dog-walking robot or a maid bot. According to Rus, it would theoretically be possible for someone to want a robot to play chess with and “generate a machine that has the computational abilities to play” with him or her.

But let’s look at the present. The robots are constructed from hobby shop materials for around $100 – the embedding of the motor and batteries is around $80. Normally, one would expect robots to be much more expensive than that. These are cheaper and faster. Rus said that this is “a simple, flexible, and rapid design process and a step toward the dream of realizing the vision of 24 hour robot-manufacturing.”

After installing batteries and motors, the robots rise on their four little legs and scurry about. The actual transformation process from flat to 3-D takes approximately four minutes. So it’s not as instant as in the movies. Nor do the robots have quite the same level of fame (or infamy). Once they’ve automatically assembled themselves using heat-activated hinges, both Felton and Rus noted that there were “no more changes.”

Before its assembly, the robot is a little smaller than a normal sheet of paper. They are about 15cm long and 15cm wide (about 6 inches) and 5cm (about 2 inches) tall. They move 2 inches per second, and they’re not heavy at all, weighing less than 85 grams, which is much less than half a pound. However, it is possible to make them bigger and smaller in size, with some limitations, Felton noted.

The development of self-assembling robots is a small but definite step toward progression in the technological world. Rodney Brooks, robotics pioneer and MIT emeritus professor (who was unaffiliated with the research) compared this development to landmark technological breakthroughs such as 3-D printers or even 1947’s ENIAC early computer. Whether or not that holds true remains to be seen, but the potential for self-assembling autonomous robots in the future remains high (whether for human domination or actually transforming into our cars.) After all, though they may be small, appearances can be deceiving. There is more than meets the eye.

Think You Have Lung Cancer? There’s An App For That