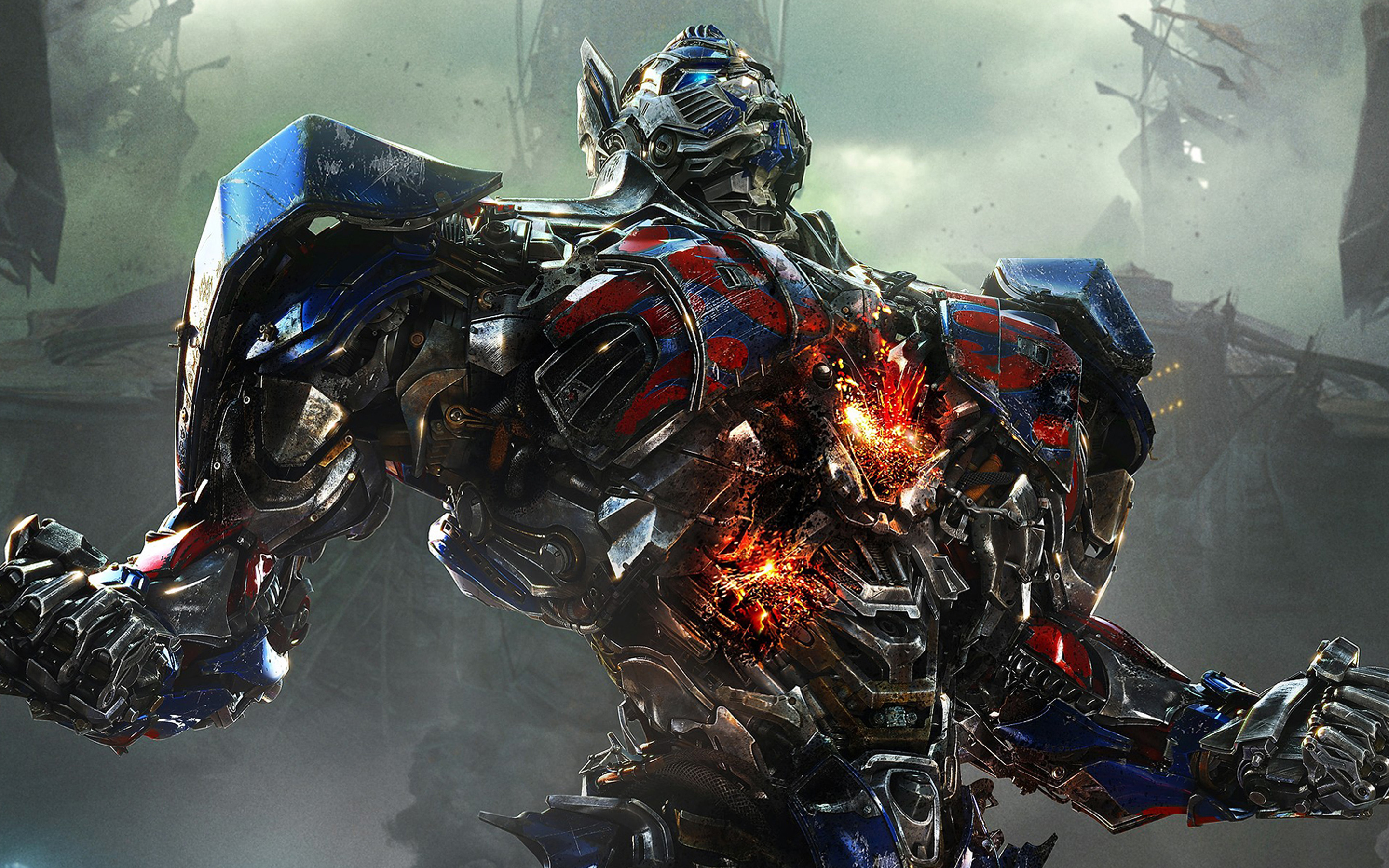 After three movies of declining quality, Michael Bay steps up once again to direct Transformers: Age of Extinction. Fans of the popular toy line about robots that transform into vehicles, often groan when talking about the film franchise and how it treats the toy line. Does anything actually change with this installment? Shia LaBeouf is nowhere to be seen, and the action, while extremely over done in this installment, is fun to watch. Other than those two features, Transformers: Age of Extinction is a self-indulgent, cliche, and ultimately boring action movie that does not add anything new to both the Transformers film franchise or the action genre as a whole.

Age of Extinction tells the story about Cade Yaeger, played by Mark Whalberg, a small time inventor from Texas. Cade, while on a job finding scrap metal, finds a giant big rig and believes that it can bring in some money for his college aged daughter, Tessa, played by Nicola Peltz. While trying to fix up the truck, Cade and his partner Lucas, played by comedian T.J. Miller, wake up the Transformer Optimus Prime, who is voiced by his longtime voice actor Peter Cullen.  Meanwhile, the power hungry and paranoid government agent Harold Attinger, played by Kelsey Grammar, teams up with a military task force called the Cemetary Wind led by James Savoy, played by Lost’s Titus Welliver. Savoy and Attinger are eliminating all of the remaining Autobots as they are seen as a threat. They are teaming up with Decepticon Lockdown, voiced by Mark Ryan. Lockdown has the ability to trasnform into any weapon. While this is going on, Stanley Tucci plays Joshua Joyce, a company CEO of a robobtics company that creates his own Transformers for military puposes for Attinger.

The story is a complete mess and exceptionally complicated. Plot points and characters are introduced either too early and are just forgotten about, or completely forced. One part that is examplified by this problem is when, halfway through, the film switches almost to a completely different movie. At one point, Attinger just disappears and focuses on Joshua Joyce’s plans.  Throughout the story, Cade, his daughter and her boyfriend Shane, played by Jack Reynor, are pursued by the government for their knowledge about Optimus Prime. They also team up with several other Autobots to take down the government. How do they do that? By creating some convoluted schemes, such as hacking equipment that the actual agency can track, which makes it entirely pointless. Why not get these massive robots who have massive guns and swords just storm the building? When it comes to the actual Autobots, whom the franchise is named after, they seem to appear when the plot calls for it or the movie needs a completely forced comedic scene. Optimus is there for exposition and to lose fights half the time, which is a silly, since he is supposed to be the strongest Autobot in the Transformers universe. Fan favorites like the DinoBots, robots who transform into dinosaurs, are there for a quick cameo, despite being heavily advertised.  The way these films seem to treat the beloved characters is almost insulting, and now at the fourth entry, they are still creating the same problems. There are just so many questions with the story and anyone will spend more time trying to figure out logical answers, rather than what these trite characters are doing. A tour bus could drive through these plot holes. 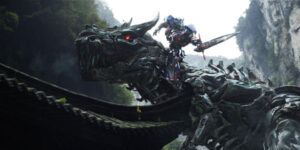 The most fans will see of Grimlock, the most popular member of the Dinobots.

There are major problems with the character’ motivations. For example, Attinger’s plans for getting rid of the Autobots does not add up. Why would someone who sees them as a threat, willingly team up with a Decepticon, who are by nature, evil? Also, why does he want to create an army of something that he hates? It just seems so backwards, and really goes against what he claims to stand for. Plus, seeing Kelsey Grammar completely phone in a performance does not help, and instead makes Harold Attinger an uninteresting villian. Characters will change traits and then immediately act a completely different way. Joshua being the most guilty of this, as he embodies the “bad character turns good” cliche. It is moments like these that will make the audience wonder why they should care about these human characters that the films desperately want to focus on more, rather than the cool and interesting looking Autobots and Decepticons.Even then, the Transformers act out of character. Optimus Prime, whom for the last three movies has gone out of his way to protect humans, now has absolutely no qualms about killing them.

Clocking in at close to three hours, Age of Extinction is a perfect example of an over produced summer blockbuster. The weak story is padded with excessive exposition and useless characters, that those two plus hours really drag on the audience. There are too many action scenes, that those end up becoming tired and over used to distract the audience from Age of Extrinction‘s massive problems. The special effects are constantly bombarding the audience and not giving them room to breath. It becomes exhausting, seeing an explosion or a slow motion shot every few minutes really makes those effects seem bland. The budget must have been on all of the completely unesscessary destruction of major cities and highways. It is expected in a Transformers film, but with new characters and a story it could be changed up just a tiny bit?

Mark Whalberg really tries to get the audience to care, and for the script he was given, he does a pretty good job. Sure, he does not set the world on fire, but he seems to be the most sympathetic character in the series so far. Cade Yaeger is funny, and incredibly smart and confident, a far cry from Shia LaBouef’s “awkward, yet supposedly relatable, but mostly annoying” Sam Witwicky. The other actors? They seem to be just there for a paycheck. Stanley Tucci tries his hardest to be both a villian and comic relief that it all comes down as confusing. Nicola Peltz is far more boring than Megan Fox and Rosie Huntington-Whiteley from the other movies. Her on-screen boyfriend Shane constantly forgets what accent, making him unintentionally funny for the wrong reasons. Even the voice actors for the Autobots cannot save the rest of the inconsistent acting; and they got a lot of the original voice actors form the 80s cartoon! 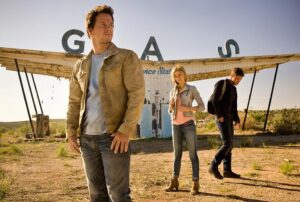 The best thing that can be said about the film is a few select action scenes. Near the climax of the film, Cade, Optimus and Lockdown are in a three way fight. The movie will switch points of view, giving the audience a sense that this fight is a lot bigger and far more dangerous than it is on screen. People could actually fear for Whalberg’s life during all of these scenes, but also see how completely destructive Lockdown truly is to a human. There is also an fun chase scene near the beginning where Cade, Tessa, Shane and Lucas are trying to  outrun the government agents. It also shows Optimus driving away, but looking far more beat up than he ever did. With some pressure on the protagonists, movie goers could really be on the edge of their seat, especially since Savoy’s agents are each armed to the teeth with machine guns and explosions. Not to mention Lockdown’s impressive arsenal is always interesting to see what weapon he will create.

Michael Bay’s Transformers film series has been the butt of jokes among movie goers. They often make fun of the overuse of CGI, the silly and far too chaotic action scenes, the focus on useless characters or gorgeous, but bland models posing as actresses. Arguably one of the biggest complaints is the way he, and/or whatever writer is working with him, will treat the beloved Transformers characters as they see fit. As  a fun summer action flick, Transformers: Age of Extinction works somewhat. Only somewhat, because it’s immensely long running time, over abundance of special effects and beyond confusing storyline will absolutely overshadow those select few action scenes. Transformers: Age of Extinction may be a sign that the series may need to end, because it has certainly over stayed its welcome.