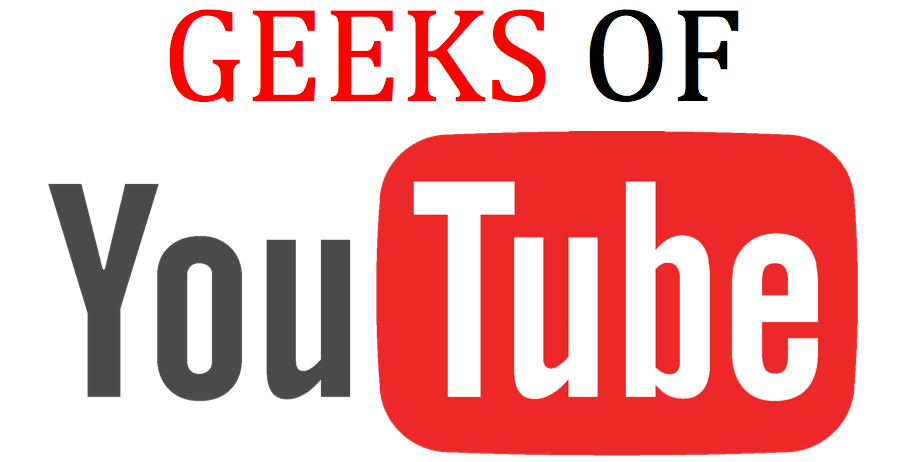 Ever since the creation of the Internet, it has been used as a gathering space for geeks around the world. With the creation of YouTube, a whole new world opened up for people who want to share their passions and become part of an online community. Naturally, many geeks were intrigued by this platform. Without a doubt, anyone who creates videos for the Internet has at least a little bit of geek in them. These ten YouTubers have definitely distinguished themselves from the rest with their commitment to the geek lifestyle.

Craig has been on YouTube for seven years. He originally started his main channel, wheezywaiter, to vent about the frustrations of his job as a waiter. It has since evolved into a humor channel full of sketches, songs, and parodies. In 2013, Craig began co-hosting The Good Stuff, an educational channel that uploads playlists on various topics such as time, airplanes, and geek week. Occasionally, Craig hosts an episode on The Mental Floss channel.

Sabrina is a Canadian YouTuber who has been dazzling the web with her wit for years. She is a fan of Doctor Who, anime, Harry Potter, and much more. As a young woman on YouTube, she speaks about YouTube culture as well as being a geeky woman on the Internet. Never shying away from self-deprecating humor but refusing to be ignored, Sabrina deserves her spot on this list.

One of YouTube’s sweethearts, Charlie has been making videos since 2007. He makes a wide range of videos, including vlogs, sketches, and short films. Additionally, he has made occasional appearances on Hank Green’s gaming channel, hankgames (discussed below). One of the biggest reasons Charlie is on this list, though, is that he is one of the founding members of Chameleon Circuit, a Time Lord Rock band.

Michael shares his quirky personality and mind-blowing facts with over 7 million subscribers on YouTube. In each video, Michael strives to answer a question, which often leads to another question, which leads to yet another question. Topics range from “Will We Ever Run Out of New Music?” to “Where Is This Video?” and show viewers the interconnectedness of the world.

Henry created MinutePhysics in 2011 in effort to “get people excited about learnin’.” On both channels, he explains topics through time-lapse drawings and voice-overs. He has collaborated with Vsauce and famous science geek Neil deGrasse Tyson. Some videos have been featured on PBS, Huffington Post, Gizmodo, and NBC. Aside from his affinity for science, Henry lands a spot on this list due to his love of Lord of the Rings and fascination with parallel universes.

Victoria makes videos addressing a range of topics from doodling to net neutrality in the US, all through the eyes of a mathematician. Her videos are fun to watch whether you’re a fellow math geek or not. In addition to her success on YouTube, she has co-authored several papers on the mathematics of paper folding and computational geometry. In a field that has few women, Victoria truly stands out.

Liam, a YouTuber since 2006, is also a founding member of Chameleon Circuit. His videos are just as often funny as they are thought provoking. In one of his most viewed videos, Liam jokingly accuses David Tennant of copying him, because the two are said to look alike. As a result, many of his 135,000+ viewers are Whovians. A Game of Thrones fan, avid gamer, actor in Chronicles of Syntax, and cosplayer—Liam is a true geek. What makes Liam special is that he uses his voice to speak out against sexism, racism, and other forms of discrimination online.

Ze joined YouTube in 2006, right around the time Google bought the site. He is a pioneer in the vlogging field, inspiring hundreds of people to express themselves through online video. But he was a person of the Internet before YouTube even existed. In 2001, he created a birthday invitation that went viral and generated millions of hits. He has won awards such as the Webby Award, which he received in 2002. Now, Ze is well known for his “True Facts” series that it hosted on his main channel, zefrank1.

In 2007 John teamed up with his brother Hank to become one half of the vlogbrothers. The community, Nerdfighteria, that has been built around this channel works to increased awesome and decrease world suck. This is done through a yearly fundraiser, the Project for Awesome, as well as other charitable projects. John teaches World History, US History, and Literature on Crash Course and co-hosts The Art Assignment with his wife. He is also the producer of Healthcare Triage, where he occasionally makes an appearance in videos, and plays Fifa on his brother’s gaming channel. To top it all off, John is a best-selling author.

As previously mentioned, Hank is the other half of the vlogbrothers and also teaches through Crash Course, giving lessons on Biology, Chemistry, Ecology, and Psychology. Additionally, Hank hosts SciShow and SciShow Space. He also has a gaming channel, hankgames, which he occasionally shares with his wife, brother, and other friends. Hank is the producer of countless other channels, including The Lizzie Bennet Diaries (an Emmy award-winning adaptation of Pride and Prejudice) and The Brain Scoop. The reason that Hank beats his brother in terms of geekiness is because he is the creator of Vidcon, the first and largest YouTube convention, and the founder of DFTBA Records, a record label and merch store for YouTubers. He also writes his own music, including songs about Harry Potter and scientific concepts. Hank is truly YouTube royalty; it is largely because of his work that the YouTube community is what it is today.

Whether you’re looking to learn, discover a new passion, or procrastinate, YouTube is full of geeks making videos! While doing my research, I noticed an unfortunate lack of women YouTubers who could make this list, but hopefully that is something that will change in the years to come. On the Internet, the geeky possibilities are endless.

A Brief History of Motion Capture