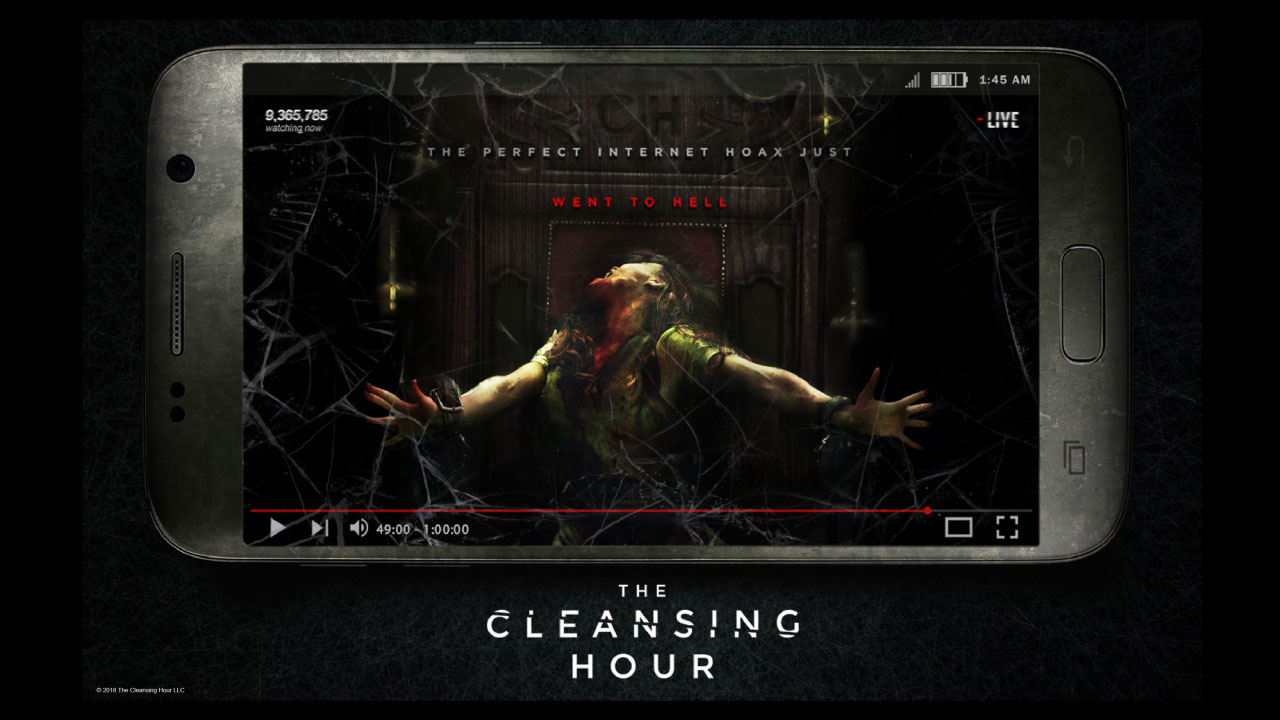 Writer and Director, Damien LeVeck delivers a story of millennial entrepreneurs who’ve made themselves famous with a webcast called “The Cleansing Hour.” They livestream exorcisms with elaborate stage sets, special effects, and actors which make the ceremony look authentic, with plenty of merchandise to sell for a side hustle but Max, portrayed by actor Ryan Guzman (9-1-1, Everybody Wants Some!!), is still frustrated as the show has “plateaued.”

Drew, depicted by Kyle Gallner (American Sniper, SCREAM 5), is the grounded counterweight to Max’s journey to fame. He epitomizes integrity and loyalty in the face of hardship and evil. When their guest star is a no-show, Drew asks his fiancée, Lane, portrayed by Alix Angelis (Love’s Last Resort), to be a last minute fill-in for their live webcast. Within moments of going on the air, things go sideways.

In an era of being technologically, socially, and emotionally plugged in to find validation by the amount of likes and follows we have on social media, Max is in dogged pursuit of a coveted blue check.  Being the face of the show, Max wants to break through the plateau in their viewership and may have inadvertently summoned a demon to make his wish come true.

LeVeck’s movie haunts me more than most because the script and actors’ portrayal goes beyond traditional horror for entertainment’s sake. The more I think about The Cleansing Hour, the more I begin to interpret deeper messaging.

In today’s society, we have become voyeurs; drawn in and encouraged to peek into someone else’s drama. There’s an old adage: “You are what you eat.” At what point do we become the epitome of that which we consume? This hunger simply does not jump from one soul to the next – it grows exponentially.

Does blind ambition and ego supercede integrity and vulnerable truth? Max is literally stripped down to confess his sins as the world watches. No spoilers here, but I have to wonder if Max finds redemption – or did he sell his soul? I’m asking. You’ll have to watch and come to your own conclusion.

I’d like to take a moment to highlight, Chris Lew Kum Hoi, who plays Chris, the boom operator. His subtle portrayal of possession is wraith-like. Your eye is drawn to him as he seemingly floats slowly through the scene with each measured step. While his castmates are reactionary to their horror-stricken situation, Chris emotes unabashed fear. I hope to see much more of him in future films.

The month of spooky tales is here and we’re very happy to present a Geek Speak with writer/director, Damien LeVeck, and actress, Alix Angelis, for The Cleansing Hour, a Shudder Original.

Damien LeVeck has stayed busy with editing projects from feature films and TV shows to development sizzles, pilot presentations, and short films. He has worked on unscripted television which includes shows for Lionsgate Television and Endmol on various networks such as SyFy, MTV, TBS, OWN, TruTV, The Weather Channel, and TVGN.

A graduate from the University of Southern California’s school of Cinematic Arts, Damien began his career cutting documentaries that notably include “Corso – The Last Beat” starring Ethan Hawke, Patti Smith, Allen Ginsberg, and Gregory Corso, and The Big Question with Desmond Tutu and Deepak Chopra.

If you visit her IMDb profile you will find that Alix is a second generation Colombian-American actress born in Gainesville, FL; the daughter of Diana Angelis, an Air Force Lieutenant Colonel Systems Engineer and James Angelis, an Air Force Major Flight Nurse. Her twin sister is singer-songwriter Kris Angelis. Alix studied Environmental Studies at UCSB before attending NYU Tisch School of the Arts Experimental Theatre Wing (ETW). She is a founding member of internationally-renowned physical theatre company, Not Man Apart, and co-founder of Badcake Films.

Watch the Trailer for The Cleansing Hour

Release date: October 8, 2020
Where to Watch: https://www.shudder.com/
“Stream Your Fears”