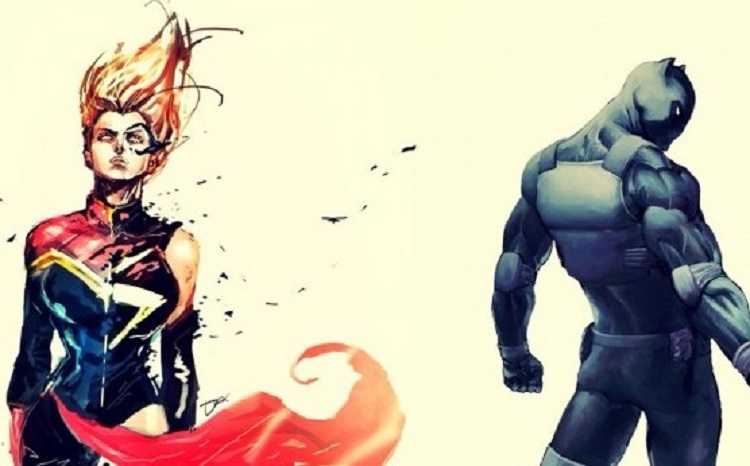 Ask and you shall receive. For some time now fans of DC and Marvel have been asking wholeheartedly for a female or minority driven comic book film as superheroes rain down from the cinema heavens. While Sony has announced their prospects for a female lead from the Spiderman franchise, possibly Black Cat, and DC setting the stage for Wonder Woman’s standalone film, Marvel is looking to stay ahead of the competition by dropping little breadcrumbs about their upcoming films. As talk on the Internet follows their lead it points to few obvious choices. Not to be outdone, it seems that Marvel is looking to introduce none other than the highly anticipated Black Panther and Captain Marvel into their shared cinematic universe.

Initial speculations began with an interview with IGN where Kevin Feige responded to the burning questions about these two. He says, “They’re both character we like, that development word has been done, and is continuing to be done on.” It wasn’t much but enough to spark the rumor wildfire. Though it has taken some time for Marvel to break the mold the hulking studios had a systematic plan to see through, therefore characters were introduced in a well-crafted timeline. Hot off the success of Guardians of the Galaxy Marvel looks to these two fan favorites to establish as popular household names.

Introduced in Fantastic Four issue #52 in 1966, Black Panther was yet another Marvel reflection of the social rights movement. As a king to the fictional country of Wakanda, Black Panther is extraordinarily smart, perhaps even mirroring the great Mr. Fantastic, and channels the same athleticism and agility as Captain America. His origins seem to be connected with Cap’s one of a kind shield as his nation prospers from the mining of rare Vibranium.

Marvel, known for their superb casting, has since the interview been hush concerning who’s playing who. Chadwick Boseman, up and coming star known for his work on 42 and Get On Up, was asked about his involvement. In a sly response he said, “Ahhh, I don’t know anything about that…Until the contract is signed, I don’t know.” If Boseman is indeed the candidate it would be ideal. He packs a dramatic punch but has yet to reach an A list salary, that is unless Marvel ropes him in as they’ve done with Pratt, Hemsworth, and Hiddleston.

Captain Marvel has been more than one face and while currently Carol Danvers, also known as Ms. Marvel, Warbird, and Binary, carries the name as she’s done in the past it’s been a popular decision. Danvers, who appeared in Captain Marvel #18 in 1969, became a super powered heroine as a result of a cataclysmic blast that melded her genetic structure to that of Captain Marvel, thus becoming a Kree/human hybrid capable of superhuman strength, flight, durability, and endurance. Apart of her more human attributes is a pilot armed with a proficiency in hand to hand combat, espionage, and marksmanship. In short she’s a woman that can hold her own with and against the boys.

With several films slated ahead into 2017 Marvel may include Captain Marvel’s standalone film but it’ll come at the expense of a solo Black Widow movie that fans have been yearning for as well. That is to say that Marvel is not only entitled to one female hero film, but considering other films scheduled to release (Dr. Strange, Thor 3, Avengers 3, Guardians 2, and others) Marvel is again formulating a plan that requires special attention. At the present time no scribe, director, or actress has been attached, so we could only treat the news as rumors first. Given that Katee Sackhoff of Battlestar Galactica and the Internet’s nomination to don the red sash stated she has yet to meet with Marvel, the lead role is still open to any looking to jumpstart their careers.

Of course, at the moment we can only entertain hypotheticals. All the surrounding buzz is no more reliable that locker room gossip as the Internet has been known to lead us astray. With that in mind who would you like to see become the King of Wakanda or become the new face of Captain Marvel?