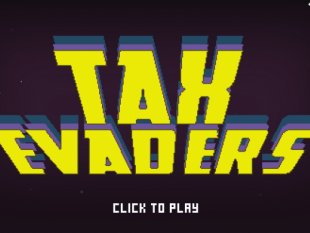 Tax Evaders! A Space Invaders-themed Economy Game For Your Browser

April in the United States is tax time! Whether you’re anticipating a nice refund, or you’re anxiously sorting your 1099s, if taxes are on your mind, you’ll enjoy blowing off a little steam with Tax Evaders.

Tax Evaders is a browser game available to play free at TaxEvaders.net. Tax Evaders is based on the basic mechanics of classic Space Invaders. Players use the same basic commands of Space Invaders, moving from side to side and shooting missiles, but instead of saving the world from alien invasions, players are shooting tax-dodging megacorporations. Invaders with recognizable logos from Bank of America, GE, Wells Fargo, Exxon and other major corporations benefiting from offshore accounts threaten civilization, and players need to defeat them! Players will also need to dodge bombs marked “austerity” and “sequester” as they fight.

This is a well done relevant game. It uses a simple, accessible mechanic, probably one that’s already familiar to most players, and makes the message clear. Engaging and educational are usually good hallmarks of successful serious games. The game was designed and developed by Gan Golan, James Bidduiph, Ashton Morris and Molleindustria (the designers of McVideogame and Every Day The Same Dream). 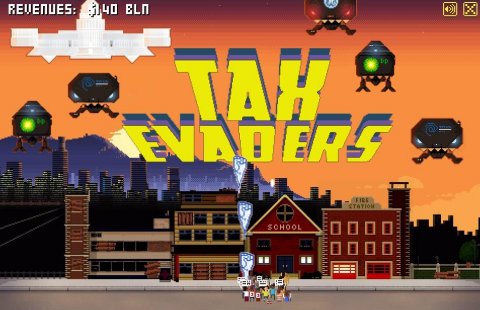 Tax Evaders also has a section called Blast ‘Em’ which allows users to quickly tweet stats about offshore accounts and call out companies by Twitter handle. While I usually dismiss two-click social activism as feel-good internet slacktivism, we’ve already read many stories about disgruntled customers who couldn’t get satisfaction through customer service channels and took to social media to get attention. (United Breaks Guitars might be my favorite story about a customer turning to social media when customer service fell through). So a tweetstorm of Tax Evaders players really could draw attention to tax dodgers.

Going to relieve some tax season stress with Tax Evaders?