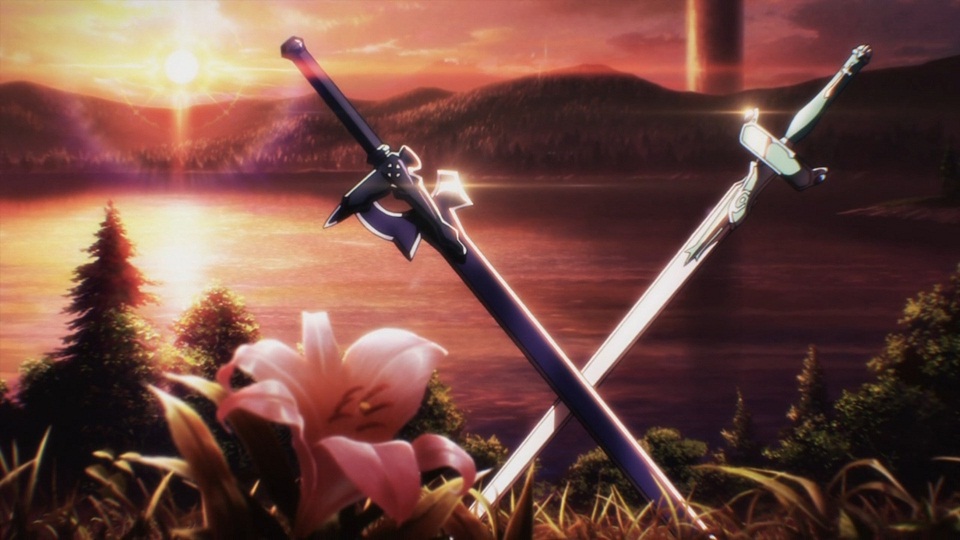 You know what there aren’t enough of these days? Shows about deadly video games that can kill you. And free chocolate. Not nearly enough free chocolate. But back to the shows about video games. I mean, sure, the kids have Pixel Face, which if you have to ask….You probably don’t want to know. There was the Tron animated series which was cool, but if you’re not a huge fan of bikes that can be created out of what looks like a Wii remote, it might not tickle your fancy.

But fear not, Anime is here to save the day!

First reaction was as follows- Wait a minute… THIS IS A MMORPG!

It’s cute, it’s dark and I wouldn’t be surprised if they took some tips from George R.R. Martin because people are just dying all over the place, in some pretty terrible ways. In short, this is not for the children.

Sword Art: Online is not only the name of the series, it’s the name of the game everyone in the series is playing. It’s the MMORPG of our dreams and nightmares. It’s a fully immersive game, you are the controller for real. ‘Others’ take your XBox One and PS4, they have nothing on Sword Art:Online’s technology, which sucks the player into the game.

So, on release day, as it would be on any massively anticipated game release day, thousands flock onto the server to play it. The only problem is, no one leaves. They can’t.

The creator of the game tells them they can’t leave, until the game is beaten. If they’re removed from their headsets, which enable them to play in the game, they die. If they  die fighting a boss or a lowly trash mob, they die. If another player kills them in PvP, they die. In short, everyone who thought rolling squishy character who would die a lot in the early levels, but pwn later on, instantly regrets their decision.

So, the game begins for real.

At this point, I don’t want to give too much away because this is an anime you’ll want to experience for yourself.

But I can tell you this, it’s obviously been written by people who know what it’s like to exist within an MMO environment. From the restrictions games like this impose on the players, to the character development, the creators of this series have executed this concept like a Stark at a Lannister gathering. It’s so very clever.

At one point, a character asks why another character is so mean to which we hear the response “You’ve never played an MMO before, have you?”

These tidbits are littered throughout the episodes, like Easter eggs. Small acknowledgements of the MMO genre that might get lost on anyone else, but are added in presumably for the enjoyment of MMO fans. From the loveable dorkiness of a guild created by newbies, to the acknowledgement that if this sort of thing ever happened it would still take a good 30 days for the MMORPG community to join together for a solution. It doesn’t just look at the world of the online game, but the minds of the online players and how they work.

For those that don’t play MMO’s and never have, this is still a series I’d recommend getting into. The animation is great, the story lines interesting and while it’s about a certain genre of gaming, it’s not exclusively aiming for that audience alone. You can easily watch this, follow along and ignore your MMO playing friend who suddenly starts laughing their head off at what you might consider to be a normal line of dialogue.

The characters are engaging, even if Kirito- the lead guy- blames himself for every stupid and selfish thing that leads to the demise of those around him. (I’m still waiting for a character to shrug at the death of another and say the words “You spank it, you tank it”). Asuna – the leading lady- offsets his angst well, by pretty much just being a hard arse about everything. Overall though, these are two characters that are interesting on their own and incredibly likeable when together. The other characters within the series are a mix of your standard players- A newbie who needs the help of a higher level player, a guild of ninjas set on getting elite items at any cost and that one player who crafts items for cheap, just to jack up the price when they sell it.

If you haven’t already, check this series out. If for nothing more than a way to be in an MMORPG without being in a MMORPG.

If you’ve already seen it, tell us what you think in the comments below.

If you’ve played the game (yes, there is a Sword Art Online game, which so far hasn’t managed to actually suck anyone into it….That we know of), what was it like?