Home Creators CornerComics Superman Lives: Up, up and away! Finally. Kind of.
ComicsEntertainment

Superman Lives: Up, up and away! Finally. Kind of. 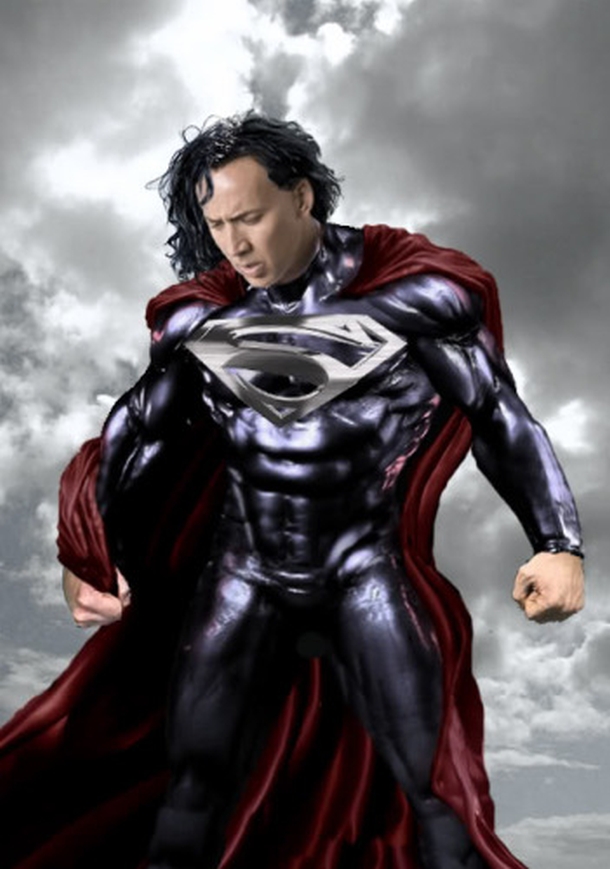 Have you ever wanted to see a movie starring Nicholas Cage, set in the D.C universe, directed by Tim Burton and written by Kevin Smith?

Superman Lives: Will It Happen?

At least, that has been the reality for many years.

Now, in the land of Kickstarter, a fearless hero has set out on a perilous quest to gather resources, so that he might turn your dream bricks into a real mansion of reality.

“The Death of ‘Superman Lives’: What Happened”  the documentary is something that might happen. Actually, it’s something that had better happen or the 2 thousand strong people who supported it on Kickstarter back in March are going to be baying for blood.

The good news is, the teaser trailer is due at San Diego Comicon 2013 (yes, THIS YEAR!), with the end product expected in early November.

If you’ve never heard the stories that surround ‘Superman Lives’ “the greatest Superman movie never made”, then you have been Googling the wrong things on the Internet. Bad geek! Naughty!

Step into my time machine, which may or may not be a hot tub shaped like a police box, as we go back….to the 90’s.

For the younglings, the 90’s were a time of real music, ripped jeans and movie franchises built solely on the ideas of parental neglect and the inherent evilness of children (Home Alone).

It was also a time of promise, a promise of a new kind of Superman. The kind of Superman who dies. (And the crowd goes wild because Kal-El is maybe one of the most boring super heroes on the face of the planet. And also the Father of all Hipsters- wearing glasses when you don’t need to? Srsly).

The script for the movie, or should we say ‘scripts’, was meant to put up on the silver screen what fans had read about in the comics. The script that has gained the most popularity over the years, is the one written by Kevin Smith. His script is highly lauded as the one that keeps the story closest to the mythos created in the comics. It’s safe to say, that if you were going to trust anyone to write a comic book character, it would be Smith. Especially as he is a true devotee of the D.C Universe (if you don’t know already, the guy gets serious Geek and parenting points for the naming of his kid- Harley Quinn) This was the biggest death in comics since they’d finally done away with that annoying brat, Jason Todd. This was bigger though, this was the death of a god.

But just like my hopes of ever seeing Superman die, so too did our dreams.

Perhaps that’s why it never got made. Perhaps the world wasn’t ready to see the fall of one of Earth’s greatest heroes.

Or perhaps Kevin Smith and Tim Burton working together is too much awesome flavor in the one movie pie.

There’s been a lot of speculation as to why the movie never eventuated and what it would have looked like.

Which brings us back to present day and the glory of Kickstarter.

One fan, Jon Schnepp, yes Grimm Fairy Tales Jon Schnepp (which would have been enough of a reason for me to tell him to shuttup and take my money) wants to find the answers.

He doesn’t just want to ask the question “Why wasn’t it made?” but he wants to see what it could have been. To give life and body to the dreams, or nightmares, Superman fans must have had about this movie.

His vision included speaking with two men who could arguably be called Gods of Geekdom- Kevin Smith and Tim Burton. Plus, the architects of the world they sought to create, the concept artists and designers. As well as the main players, most notably Nicholas Cage, who made headlines with his own devotion to Superman by giving his child the most well known Kryptonian name on Earth.

Everything from the rainbow suit, to a bizzare fascination Schnepp seems to have with Brainiac, he wants to expose it all. Then box it up, with a disturbing bow, into a documentary that, as he says in his Kickstart video, “we can all watch together”. Somehow, I don’t think it’s going to be a family night movie. Unless you have really rad family movie nights.

And no matter what happens, even if this documentary is as bigger dud as ‘Superman Lives’ was expected to be, it’ll still be a few hours better spent than that time you thought watching Tank Girl the movie, would be a good idea.

MOBAs: Learning Curves, The Community and the Future