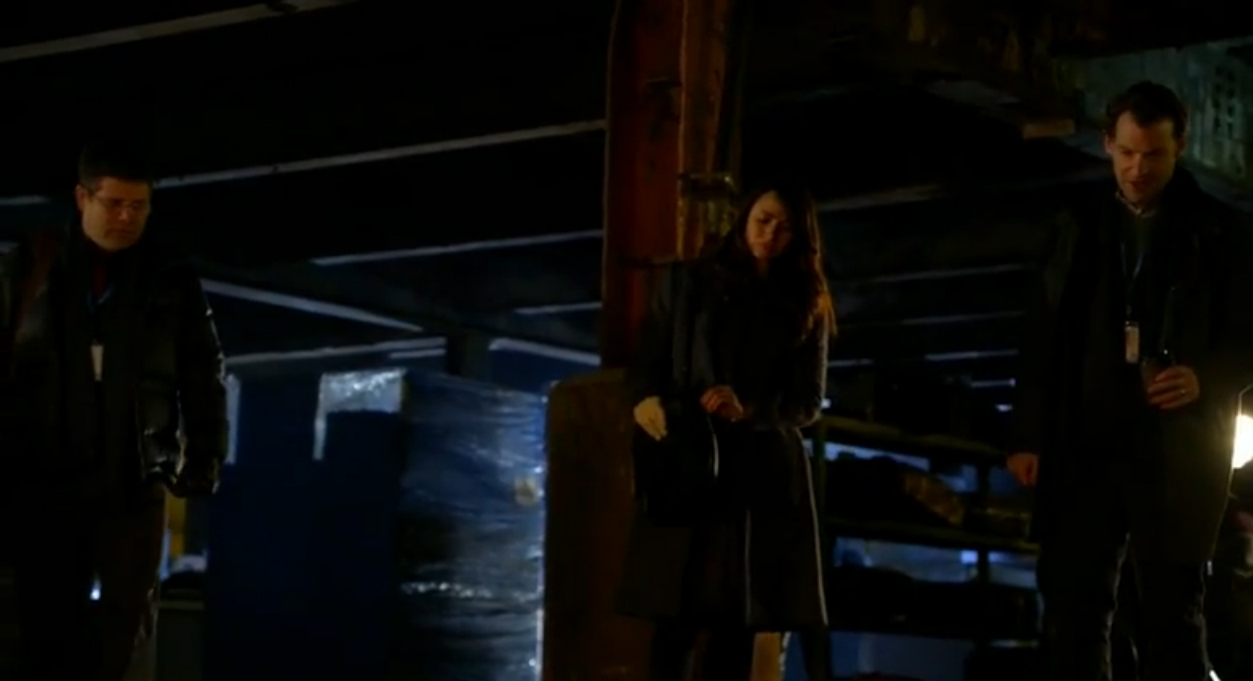 This summer, FX brings Guillermo del Toro and Chuck Hogan’s The Strain to TV for some creepily delicious vampire horror.  We’re here to bring you our weekly take on just how well the adaptation holds up.

This week’s episode, entitled “The Box,” starts off just where we left off last week: a plane full of travelers seemingly killed due to an unknown pathogen, a gigantic coffin seemingly unaccounted for appears within the flights cargo and just as mysteriously disappears, and an unknown entity has now made its way to New York.  Ephraim Goodweather (Corey Stoll), CDC Chief Medical Officer of New York City, along with his partners Dr. Nora Martinez (Mia Maestro) and Jim Kent (Sean Astin) must track down the source of this virulent strain (ah hah!) in order to find a cure.

Working against the clock, Eph seems to have enemies on all sides as he’s trying to ascertain the parameters of this seeming outbreak.  While the head of the CDC wants to play off the severity of the strain, the surviving passengers are also unwilling to cooperate due to conflicting external reports.  It would seem the power plays on the part of mysterious businessman, Eldritch Palmer, has created mounting pressure for Eph and Nora to get a handle on the impending epidemic.

Returning to the plight of Abrahiam Setrakian, the shop keeper who was summarily arrested after claiming that the container found on the flight was indeed a coffin and what was inside it must be killed, the show provides further background on why he feels the situation is just so dire.  In “The Box,” it is revealed that the man is a Holocaust survivor and worse still that the vampires had something to do with his past interment, especially the boogeyman that has been helping Eldritch Palmer (Jonathan Hyde) to this point.  David Bradley does well to play up his time-tested hatred for the creatures in his encounter with the being as they shared their conversation through prison glass.

Sadly, it seems the series has also stopped the understandably arduous task of keeping the timestamp for each major scene that they established in the opener.  The pacing of this episode, which spans an entire day, may have been the lead suspect in the death of the plot device, as much of the story in “The Box” was centered more on slow character development than the urgency of the situation.

As tests are being taken in order to figure out just that is going on with the pathogenic worms, more time was taken with our lead character’s lives in “The Box,” to give background to their motivations as the epidemic hits.  With more time to flesh his character out this time,  guy who plays Eph really stands out as probably the best actor on this series so far, which can be a bad thing depending on the scene.  Finding Eph becoming more and more estranged from his former wife and son as well as a new man looking to fill his place in his son’s life, guy who plays Eph’s speech at an AA meeting, divulging his pain at his starting circumstance was an emotionally charged, devastating moment to behold.  Having such a shining light in the middle of other actors who still have yet to get a handle on their characters quite yet, makes for some unfortunate inconsistencies.

Though the episode takes its time to flesh out its characters, time waits for no one in this universe as the early stages of transformation hits the flights four survivors.  From hair loss to losing teeth to having a craving for blood, the unknowing proto-vampires seem to be in for a world of hurt, for as they established in the previous episode, this strain likes to augment their hosts as they take over.

Worse still for our heroes, the reanimated bodies of the passengers of the doomed flight, after seemingly devouring everyone in the Medical Examiner’s office, seem to have disappeared.  This along with Palmer’s alliance with the monstrous being, known as the Master, bodes terribly for the population of New York.

Some of the Good…

“The Box” faired markedly better than lasts week’s opener, which was plagued in certain instances by clunky dialogue and characterization, especially when it came to their minority characters.  I was especially drawing much of my ire at the performance of Miguel Gomez, cast as Augustin “Gus” Elizalde.  Fortunately, his character was given room to breathe this episode, allowing for more nuances to be conveyed.

Some of the Bad…

Sadly, my gaze shifted on towards someone I had hoped wouldn’t have much trouble with the show herein, with Maestro as Nora.  Granted much of my frustration is on the writing that tries to make a lot of the dialogue too overly complex and scientific sounding for its own good.  It’s a tough burden for anyone, but it may have been unneeded as an exposition drop.  Then again, as they are trying to heavily root this series in more scientific terms, I can understand their want to include such conveyance.

A definite improvement in some ways than the first episode of the season, “The Box” still suffered from some poor dialogue choices and line reading.  Given some time to work the kinks out and build chemistry, the cast and the writers can make their way up to the esteem that fans of the novel hold true to.  Though Eph and his crew may think time is on their side, they may already be too late as the vampiric epidemic spreads.