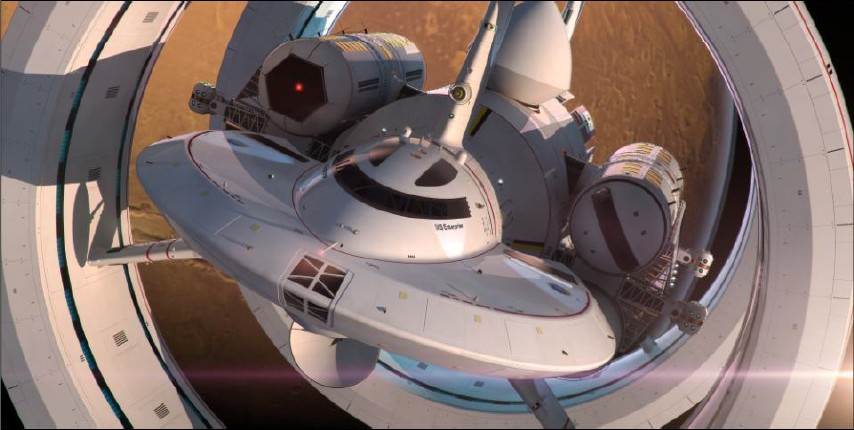 One small step for man, one giant leap into hyperspace for space travel!

Behold, The Future of Flight!

A couple of years ago, Harold White, NASA engineer and physicist, revealed that he had plans to work on a groundbreaking scientific idea right out of “Star Trek,” “Star Wars,” and just about every other star-related science fiction. The plan is space travel faster than the speed of light.

And according to renowned scientific calculations, the speed of light is…fast. Very, very fast.

Standing on the bridge is Mark Rademaker, a designer collaborating with White. Rademaker used computer-generated imagery (you know, that thing we complain about being overused in movies nowadays) to create a concept of a warp ship for NASA. Fittingly enough, this design has been dubbed the IXS Enterprise.

With any luck, its mission will be to seek out new life and new civilizations, and to boldly go where no man has gone before.

At present, space travel is a long process, and any interstellar explorations could take centuries to complete. A ship like the IXS Enterprise capable of traveling at light speed, or even faster, could drastically shorten that exploration time, possibly even to a number of weeks.

Now that is some impressive science.

In an email interview with the Washington Post, Rademaker admitted that the IXS Enterprise does possess some “Sci-fi features that might never transfer to a possible final design.” But the image is out there. The idea is out there, and this time, it has the capability to become a reality.

The science behind such an operation is mind-boggling. The details are best left to physicists and anyone with an understanding of multivariable calculus, but I’ll try to provide a simplified explanation. No, of course that’s not my whole explanation.

The concept of traveling at speeds faster than light essentially seeks to manipulate a loophole in Einstein’s theory of relativity. In theory, this works by expanding space-time behind the Enterprise and contracting it before the Enterprise. This forces the space behind the spaceship (see what I did there?) to expand, pushing the craft forward.

Not a bad simplification for an English major, if I do say so myself.

White calculated a different method of making the IXS Enterprise a reality while expending far less energy by reverting to a theory proposed by physicist Miguel Alcubierre in 1994. Alcubierre’s theory centered around the Alcubierre drive, believing spacecraft could travel faster than the speed of light if negative mass could be created—the spacecraft would essentially move in the same way (contracting space in front and expanding it behind) but with less energy.

White’s concept adds in large rings to surround the spacecraft. (Imagine the hyperspace rings from Star Wars. It’s a little like that).

Rademaker told the Washington Post that the rings are critical because they form “the Warp bubble,” meaning they “reduce the energy requirement needed to form the bubble.”

Shame the spacecraft can’t just run on the energy of our excitement.

Reality is still a long way off for both the IXS Enterprise, but the future of space flight looks as bright as the stars we explore.