Christmas might be looking a little less amusing this year. Earlier on Wednesday, Sony Entertainment Pictures decided to cancel its controversial comedy, The Interview, due to numerous terror threats against theaters and the multiple cyber-attacks against the company itself. The $44 million comedy film, which North Korean officials accused as being an “act of war,” depicts the assassination of North Korea’s leader by the two protagonists played by Seth Rogen (who also co-directed it) and James Franco.

How Did This Happen?

This decision came after a threat was made against theaters where the movie would be playing, claiming that movie goers would “suffer a bitter fate” and warning people to “remember the 11th of September 2001.” As a result, most major theater owners have stated they had decided to postpone or cancel the screenings. Sony also lost the $35 million spent on promotional material for the film.

“In light of the decision by the majority of our exhibitors not to show the film “The Interview,” we have decided not to move forward with the planned December 25 theatrical release. We respect and understand our partners’ decision and, of course, completely share their paramount interest in the safety of employees and theater-goers. Sony Pictures has been the victim of an unprecedented criminal assault against our employees, our customers, and our business. Those who attacked us stole our intellectual property, private emails, and sensitive and proprietary material, and sought to destroy our spirit and our morale – all apparently to thwart the release of a movie they did not like. We are deeply saddened at this brazen effort to suppress the distribution of a movie, and in the process do damage to our company, our employees, and the American public. We stand by our filmmakers and their right to free expression and are extremely disappointed by this outcome.” – Sony Entertainment’s statement 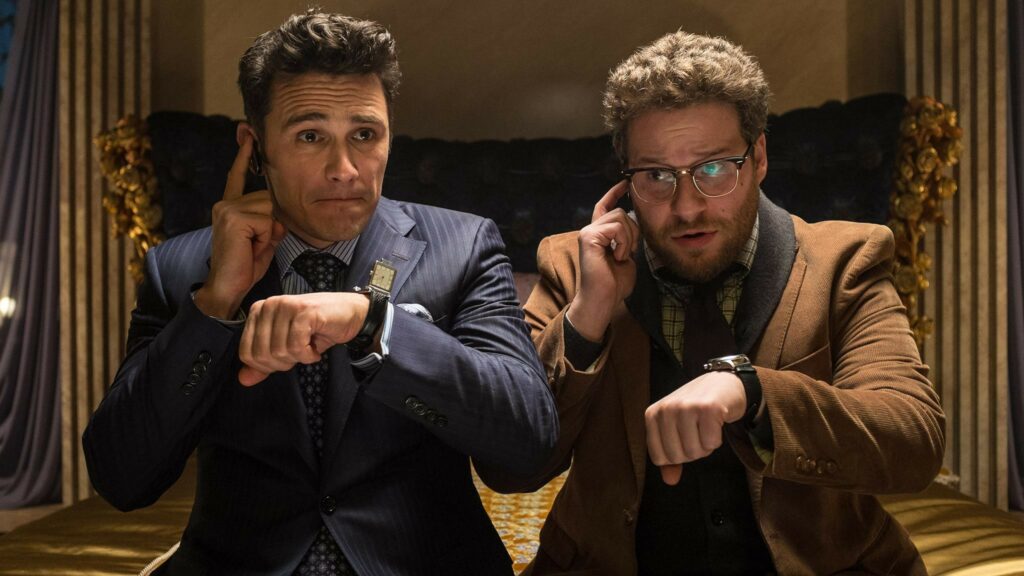 U.S. investigators said that an announcement would be made pinning the blame on hackers working for the Pyongyang regime in North Korea. Officials also stated that they believe the attack was a direct order by the country’s leadership and carried out by a unit called “Bureau 121.” Other sources claim it was caused by a group calling themselves the “Guardians of Peace,” and that they had posted numerous messages on an anonymous message board.

These threats have also been tied to the cyber-attack that released highly sensitive and inflammatory emails from many Sony Entertainment employees, including Chairman Michael Lynton. Another result due to the cyber-attacks is that Sony’s computer systems were damaged and two former employees are suing due to personal information being leaked in the controversy. Hackers claim to have stolen at least 100 terabytes of Sony’s private data.

Actors Rogen and Franco, in light of possible threat, also cancelled all upcoming press events with no comment. Many people have expressed remorse that a country’s freedom of speech might be so easily intimidated by hackers. But it seems most companies would rather be safe than sorry when it comes to weighing the right of free speech and the safety of their patrons. Other people believe that this caution is an overreaction and a way of bowing to the terrorists’ desires. 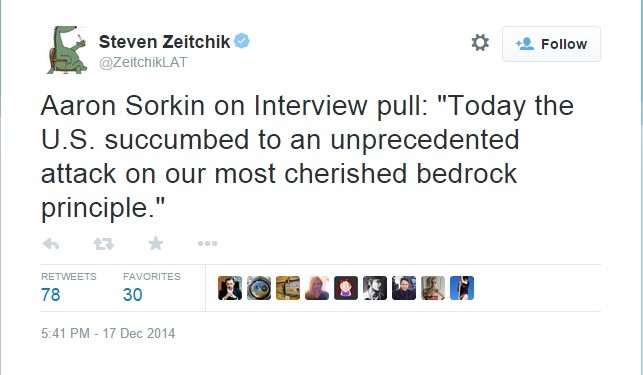 Some of the companies that decided to cancel the movie were AMC Entertainment, Regal, Cinemark, and Carmike Cinemas. These theaters control more than 19,000 screens across the United States.

A Canadian chain, Cineplex, stated; “Cineplex takes seriously its commitment to the freedom of artistic expression, but we want to reassure our guests and staff that their safety and security is our number one priority. We look forward to a time when this situation is resolved and those responsible are apprehended.” 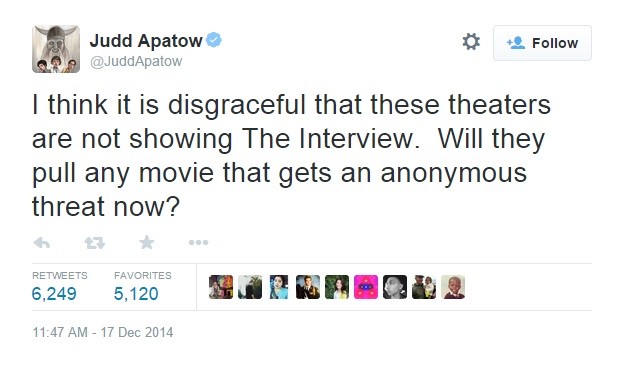 The hack is being investigated by the FBI and in a statement earlier, the U.S Department of Homeland Security said that “there is no credible intelligence to indicate an active plot against movie theaters within the United States.”

Sony Pictures was also offered support by the U.S government in response to the hack, according to a statement from the White House National Security Council. “The U.S. government is working tirelessly to bring the perpetrators of this attack to justice, and we are considering a range of options in weighing a potential response. We take very seriously any attempt to threaten or limit artists’ freedom of speech or of expression.”

While some people have sworn off the movie, this threat and subsequent cancellations have caused others to pledge they will see the film no matter what. However, this may prove rather difficult since Sony made it clear that they had no plans to release the film digitally either.