Google’s popular IM application – Hangouts – will soon integrate SMS and MMS onto itself in an upcoming release. 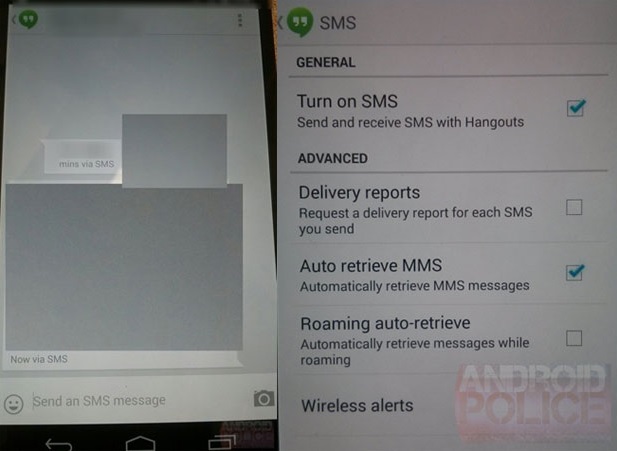 Leaked images, courtesy Android Police, show configuration settings in Hangouts version 1.3, allowing users to toggle SMS/MMS integration on and off. On receiving text messages, users will see a ‘via SMS’ tag at the bottom of such messages in conversations.

Google’s community manager for Hangouts and Chat – Dori Storbeck,  had confirmed SMS and MMS integration for the app within a day of its release in May this year.

” [..] yes, SMS integration is coming soon – it is one of our most requested features!” – Dori Storbeck

According to rumors, the application will also bring on a video sharing feature. However, an important feature, which users have probably wanted more than the SMS integration, is the addition of voice calling. That however, is not part of the upcoming release, and we may just have to wait some more.

There’s no information on when the new update will roll out to devices. It is being speculated that the app may launch along with the Nexus 5 and Android 4.4 KitKat this month. We’re also hearing that Hangouts may entirely replace the default messaging app in Nexus devices.

Hangouts was released by Google at its annual I/O conference in May this year. It replaced Google Talk – the company’s previous IM client that allowed for free voice calling. The app’s USP is its unification feature – users can access and respond to their conversations from any device – phone, computer, tablet etc. Unlike other number-dependant IM clients like WhatsApp, which only let you sign on to 1 device at a time, Hangouts allows multiple sign-ins across multiple devices. However, a number of users have criticized the app for removing the free calling feature.

Hangouts has been downloaded over 100 million times since release, and currently enjoys a rating of 3.4 on Google’s Play Store.

10 Facts About Bill Nye That You Never Knew