Scuf Gaming has just come out with a new version of their Scuf Hybrid Xbox 360 controller. It promises to give you unparalleled reaction time as you rock through your favorite video games. So, can how does the Scuf Hybrid stack up when it comes to actual use in gaming? Pretty well actually, at least if you’re playing twitch-based games.

If you just took a look at the controller for a moment, you might think it was identical to a traditional 360 controller, albeit with some keep green trim. Once you grab on to the controller however, it become apparent that it is not quite the same thing. While the upper half of the controller is designed almost exactly like the 1st party controller, the bottom wings portion has been altered. The wings have been thinned and curved to give them a more ergonomic feel. While I never had issues with the size of the original, the new slim style did give me better reach to the back paddles.

The controller also came with a grip on the back of it that made for minimal slip. I get rather hyped up while playing video games and have a tendency to leave my poor controllers feeling like they just came out of a downpour. Whatever the substance they put on the controller seemed to just ignore any slickness and kept my hands firmly stuck in place.

The biggest innovation that Scuf controller bring to the table are the paddles installed along the back of it. There are four rubbery plastic paddles that run down the back and correspond to buttons. If you tap a paddle, then the game will register the corresponding button as having been pressed. I was surprised at how easily the paddles were triggered. I thought you’d have to press them down similar to a button, but it really is just a tap and you’re done. With four different paddles to customize, it becomes pretty easy to get the setup you want.

The paddle button mapping is easily customizable on the fly, so you can change it up in between matches or games. Actually it only takes a few second to reassign, so you could literally do it on the field. I found them useful when playing Call of Duty, because every second counts. Normally hitting face buttons means taking your thumbs. of the analog stick, and nobody wants that. The paddles were awkward to get used to at first since you have to sort of hold your finger out while playing, but they made for some quick knives. 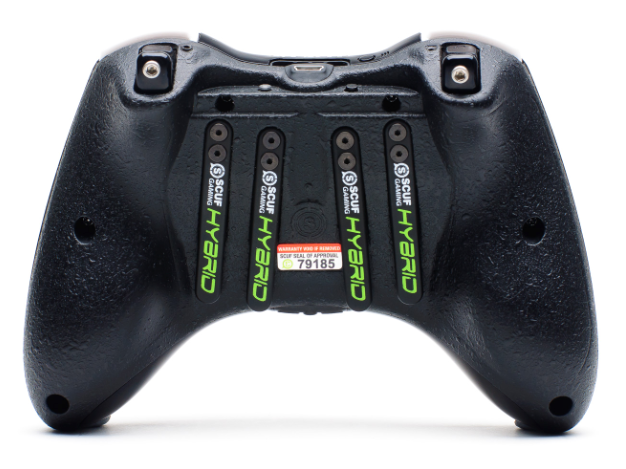 The Scuf Hybrid that we got to handle had trigger stops on the left and right triggers. It essentially allowed for trigger presses with much shorter time. If the trigger doesn’t have to go down all the way in order to work, then you save yourself precious milliseconds with every click. If you favor using single shot guns in FPS games like I do, then the ability to shave any time off of your trigger click can make a huge difference. When you save enough time to get in one trigger click more than the other guy, it is usually you who is going to be left standing, assuming your aim doesn’t suck.

If you are really into competitive FPS games like CoD or Battlefield, then this controller is a definite purchase. You have to really be into them, because the $125.95 starting price is going to be a bit too much for the average gamer. If you are looking to go pro, or just have money to throw around then the Scuf hybrid is probably going to be a must buy for you. If you prefer role-playing games, platformers, etc, then you don’t really have much of a reason to pick it up. I could certainly feel the difference in my CoD gameplay when I was using the Scuf Hybrid, and I would recommend it to any serious FPS player out there.