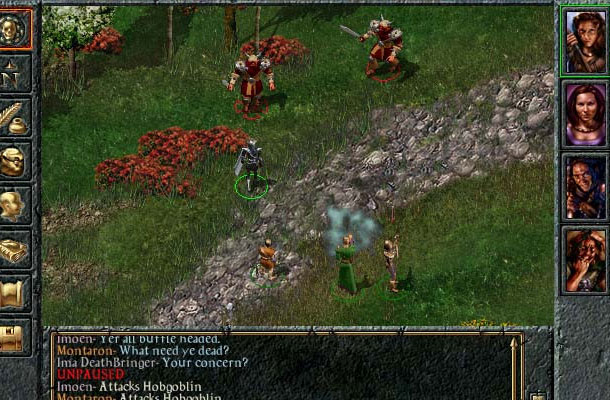 I’ve been playing RPGs since I got a copy of Baldur’s Gate free with a desktop my family bought some years back. I would agonize over my character’s name and features, play the opening chapters, and then quit, forget about it, and start over some time later. I could probably quote those first few scenes word for word. Thanks to the hundreds of hours I sunk into The Elder Scrolls and Fallout series, I am well versed in RPGs.

So why am I bad at them?

Don’t get me wrong, I never had any trouble with quest lines, and I was handy at finding items. In Fallout I was a killer with VATS but also a dead-eye shot freehand thanks to my copious experience in the world of FPS games. I would always gather my party before venturing forth.

I mean I am bad at the spirit of RPGs, I miss their essence. In theory, you’re supposed to make a choice about who to be: the fighter, the sneaky-sneaky one, the talker/charmer. You are faced with a series of problems and how you deal with them depends on what skills you invest in; for instance, you could convince the guy at the end of Operation Anchorage to kill himself, or you could get out a laser cannon and do the damn thing yourself.

The problem is I want to do all of them, to be universally talented. I’m so indecisive, I change my mind about who the character is every few minutes. If I see a piece of cool armor, I will wear it to (certain) death even if its stats are all wrong for a sneaking approach etc.

I blame the universality of a game like Oblivion. It’s epic setting combined with no level cap allowed me to end up becoming not only hero of the world, but also leader of the Fighter’s guild; Mage’s guild; Assassin’s guild; Arena Champion; six-time house owner; the reincarnation of a Divine Crusader; a Mythological master-thief; and, at one point, God. While I appreciate the game allowing one to get ‘the most from their money’ out of the experience, it didn’t help me mold a recognizable character (or indeed, his narrative) out of the considerable amount of clay they gave me.

I’m also a massive completest. I won’t be happy until I have done everything. Huge RPG games, as opposed to linear ones, don’t really allow for that. I want to be able to realize every possibility, so I will sometimes reload a save and do a quest an opposite way to see what the reward would be. If I knew who my character was, and what they would do, that wouldn’t be an option.

This means I go by what benefits me, rather than what my character would do based on who he/she has become through their experience of the game world.

I’m jealous of people who can say “well, I didn’t want to do that, but it’s what the character I rolled would have done”. My characters always become an extension of myself: Chris Yeoh in Skyrim, Chris Yeoh in the Mojave Desert etc. So the next time I sit down to play one, I’m going to try making a person, rather than myself. I’ll have to turn down some opportunities, and even more rewards, but hey, I can’t be liked by everyone, right?