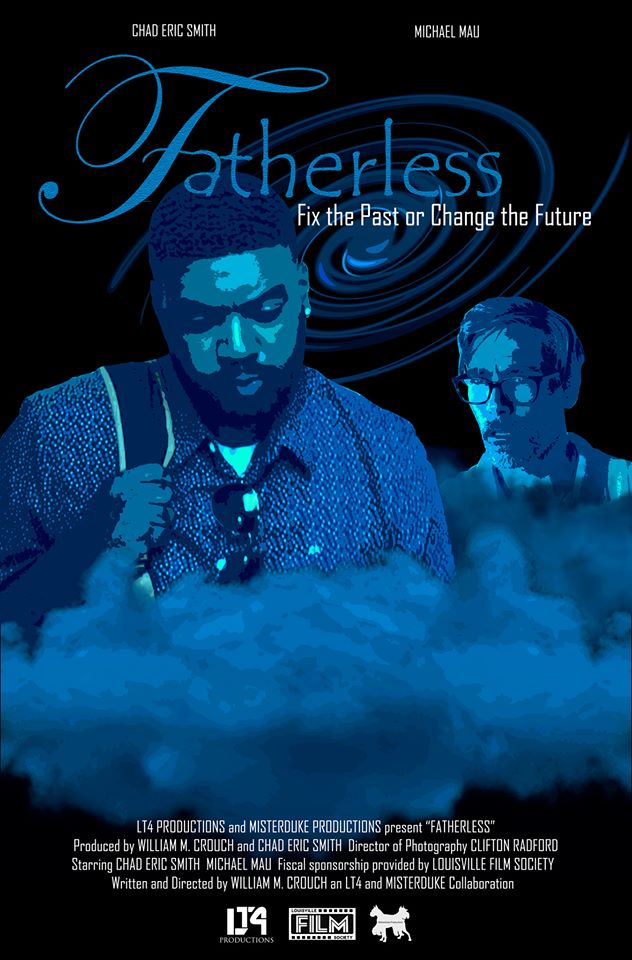 Soon Sci-Fi fans and movie festival audiences will have the opportunity to view a wonderful new film starring Chad Eric Smith and Michael Mau and written and directed by William M. Crouch.  Smith is also the film’s co-producer, together the cast has made a movie that many are sure to enjoy.

The film “Fatherless” depicts the story of its main character Logan Avery, played by Chad Eric Smith, who lost his father at a young age and was raised by a stepfather who the young man feels betrayed by after losing him several years prior.  In the story Logan is a young physicist attempting to make time travel possible in order to fix his troubled past.

As Logan is failing in his efforts to develop a theory that proves time travel may be achievable, he meets Kevin Obre, -a physicist twice his age (played by Michael Mau) who has learned of the young man’s work and efforts.  As Obre and Logan soon begin working together, Obre reveals that he knew Logan’s stepfather.  Learning of Obre’s relationship with his stepfather is upsetting to Logan and naturally begins to hinder their working relationship.

While “Fatherless” is essentially a Sci-Fi film, drama and emotion run deep throughout the 28-minute film.  Logan’s dismay of the father figure in his life is convincingly portrayed by Smith as the young man becomes upset in his interactions with Obre and as the two begin struggling to maintain their working relationship.

Smith says that “the role of Logan was” his “most challenging transformation to date.”  Smith compares his character to that of Matt Damon’s in “Good Will Hunting,” -rightfully so as both have “a brilliant yet tortured mind,” Smith also says that he drew inspiration from characters such as Erik Killmonger in “Black Panther” played by Michael B. Jordan and the character Chiron in Barry Jenkins’ “Moonlight” as both characters respectively are affected by the loss of paternal father figures.

In preparing to play the role, Smith says he lost 35 pounds via fasting and exercise, the actor/director/producer also got an earring while also working with stylist Dexter the Groomer of Millennium Salon who helped Smith to gain a sharp and youthful look suitable to the character.  Also, in preparation for the role Smith researched the emotional and social effects of fatherlessness as well as theoretical physics on how each pertains on individual and societal levels.

Smith and Filmmaker William Crouch meanwhile conversated extensively about the internal turmoil caused by the lack of a Father Figure in one’s life and Crouch’s own struggles growing up in a family in which his father was emotionally unavailable.  Smith, who studied Psychology, spoke with other individuals who grew up Fatherless in order to further gain perspective and discover common recurring themes and patterns in the lives of individuals who never had a real father.

Smith’s portrayal of the embattled Logan is wrought with emotion while Michael Mau’s delivery is strongly expressive of a compassionate individual reaching out to a young man and taking him under his wing.  “Fatherless” also delivers a message of the importance of having faith in the pursuit of knowledge of things not yet proven while Mau’s character emphasizes that the work of scientists must focus on the future and not changing the past.

As “Fatherless” winds down Logan begins to come to terms with his troubled past via guidance and empathy by Obre, Writer/Director Matt Crouch scripted the film with a rather ambiguous ending which puts the emphasis on the film’s overall message and emotion without leaving his audience disappointed.

Sci-Fi fans are sure to appreciate “Fatherless,” the film is visually pleasing while the musical score buffs the story nicely.  Viewers who simply appreciate a good movie likely also will enjoy the film, time travel movies usually are fun and “Fatherless” gives the audience a nice dose of drama as well.

Fatherless is currently making its way to the Film Festival Circuit early next year, Sci-Fi buffs and movie fans soon can be on the lookout for a behind the scenes featurette as screening announcements are made in the coming months ahead.