For this presentation at Animazement, four of the young men from stage-combat group The Jacabals demonstrated how to properly wear a hakama. A hakama is the wide-pants bottom worn over a kimono in old samurai movies. 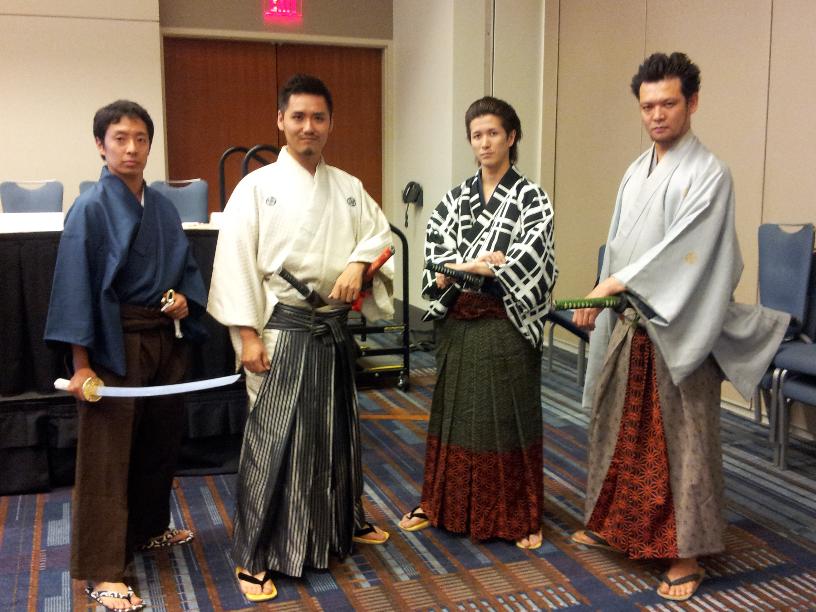 The Jacobals began with a demo battle in full, traditional outfits. Their translator called this type of stage battle chambara (also sometimes written chanbara), but most of us in the audience were too amazed by the amazing combat from old samurai movies happening right in front of the room! I found out afterwards that lots of the viewers were repeat attendees, who had seen the Jacabals previous years at Animazement, and kept coming back to see them again. It’s not hard to see why… if you’re a fan of samurai combat movies, it’s amazing to see the actors performing dramatic attacks and overblown death grimaces in person.

Then they called for audience volunteers to be dressed as samurai. They were first dressed in casual summer kimono, although as they note, this wouldn’t be appropriate for a warring samurai. (Unless the battle broke out at a garden party, which after a weekend of anime shows and manga books, sounds totally logical to me.)

How To Wear Hakama

The hipbone string, wrapped and tied just under the navel, holds the kimono closed and starts to provide the straight silhouette. This is followed by a decorative obi on top. Fold one end in half, wrap carefully around the body, keeping the obi smooth, then tuck the ends and do some kind of magic to make the decorative knot in back. Seriously, this is where I stopping thinking how I could go buy a kimono from the dealer’s room downstairs and wear it, and starting realizing that when worn incorrectly, a kimono will look like a bathrobe.

The hakama can look like a full skirt (especially in black-and-white samurai movies) but is really very wide-legged pants. They’re held up with an attached belt at the waist, and fall to the wearer’s ankles. 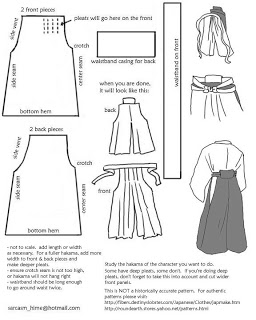 This wonderful pattern from IMadeItByHand shows the garment’s outlines much better than my photos do.

The waist should show a little bit of obi, this is apparently for sword access and not just to show fashionable coordinating fabrics. If the pants are a little too long, the wearer can pull a bit of extra hakama fabric up through the waist straps to make the pants easier to manage, and to prepare for combat! 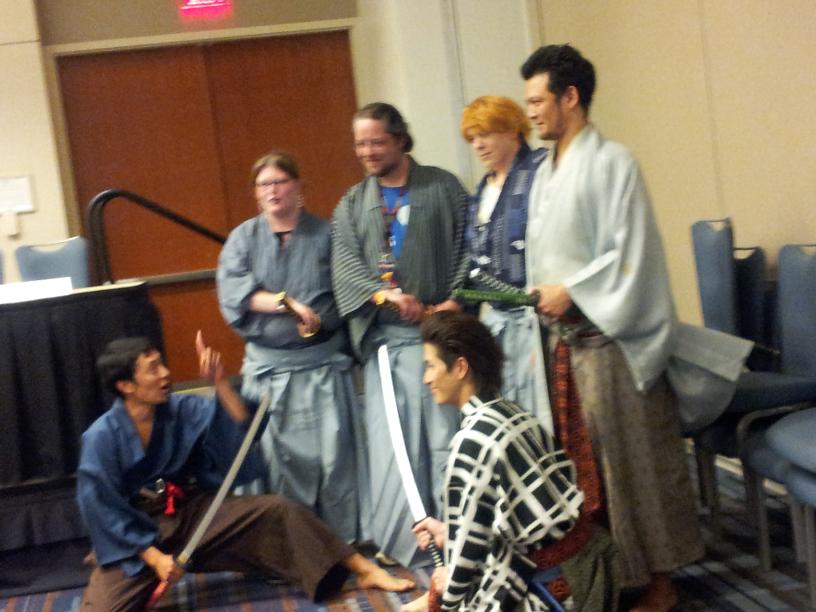 Then The Jacabals taught the audience volunteers how to draw their swords, and some of the basics of samurai movie attacks, dramatic deaths and all!

It was great fun, and I’ll be able to look at samurai outfits and stage combat with new eyes, now!