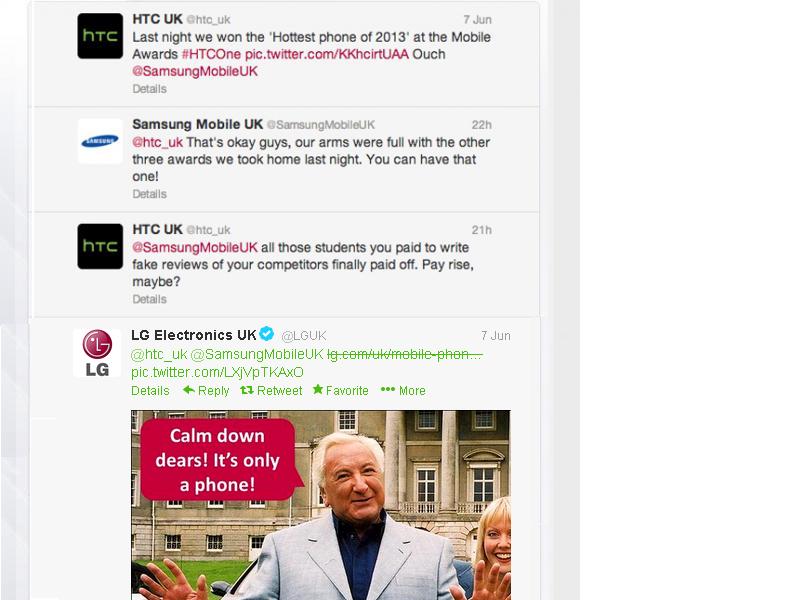 Samsung and HTC recently took their fierce competition to Twitter. The bitter word battle on Twitter got much more heated and ridiculous, when HTC accused the Korean Giant of “paying students to write fake reviews for the competition”.

The whole mess started after last Thursday night’s Mobile Awards at which the “Hottest phone of 2013” award was won by the HTC One. Well, the company then went on to tweet something from it’s UK account that was funny and clearly a shot at Samsung and its new Galaxy S4. The tweet reads “Last night we won the ‘Hottest phone of 2013’ at the Mobile Awards #HTCOne, Ouch @SamsungMobileUK”

However, the guys responsible for managing Samsung UK’s Twitter account didn’t just sit there quietly taking the heat, they retaliated and it was a decent comeback, from its UK account Samsung Mobile tweeted the following,”@htc_uk That’s okay guys, our arms were full with the other three awards we took home last night. You can have that one!” – BURN!

But things did get a bit ugly after that, with HTC UK’s social media folks tweeting something that’s still considered an accusation and hasn’t been completely proven. HTC UK wrote in its tweet, “@SamsungMobileUK all those students you paid to write fake reviews of your competitors finally paid off. Pay rise, maybe?”

If you don’t know what the accusation is about then let me tell you that it refers to the investigation in Taiwan where Samsung allegedly paid students and bloggers to post negative comments around the world wide web about the HTC One and other competitors. However, the allegations are still to be proven, so that was definitely not a cool move by HTC’s UK social media team.

Fortunately, LG Mobile UK was the one to literally calm both parties by tweeting a picture of famous British film director Michael Winner, with the following captions “Calm down dears, it’s only a phone.” but in addition to the picture LG also linked to the Nexus 4 phone, to make sure that Nexus 4’s name wasn’t forgotten in the catfight between the two giants.

I’m not trying to take sides here, but lately HTC has been pretty truculent towards Samsung on Twitter, previously they mocked the Galaxy S4’s launch and even tried to hijack the attention by offering free coupons and drinks to the attendees.

Looks like the Taiwanese giant is using a fierce social media strategy to bring down Samsung’s huge sales a notch.

Even though these little fights on Social media are “Cute” and “Silly”, we still should always be careful before saying anything, because once you say it, you can’t take it back.

What do you think about HTC’s response? Let us know.