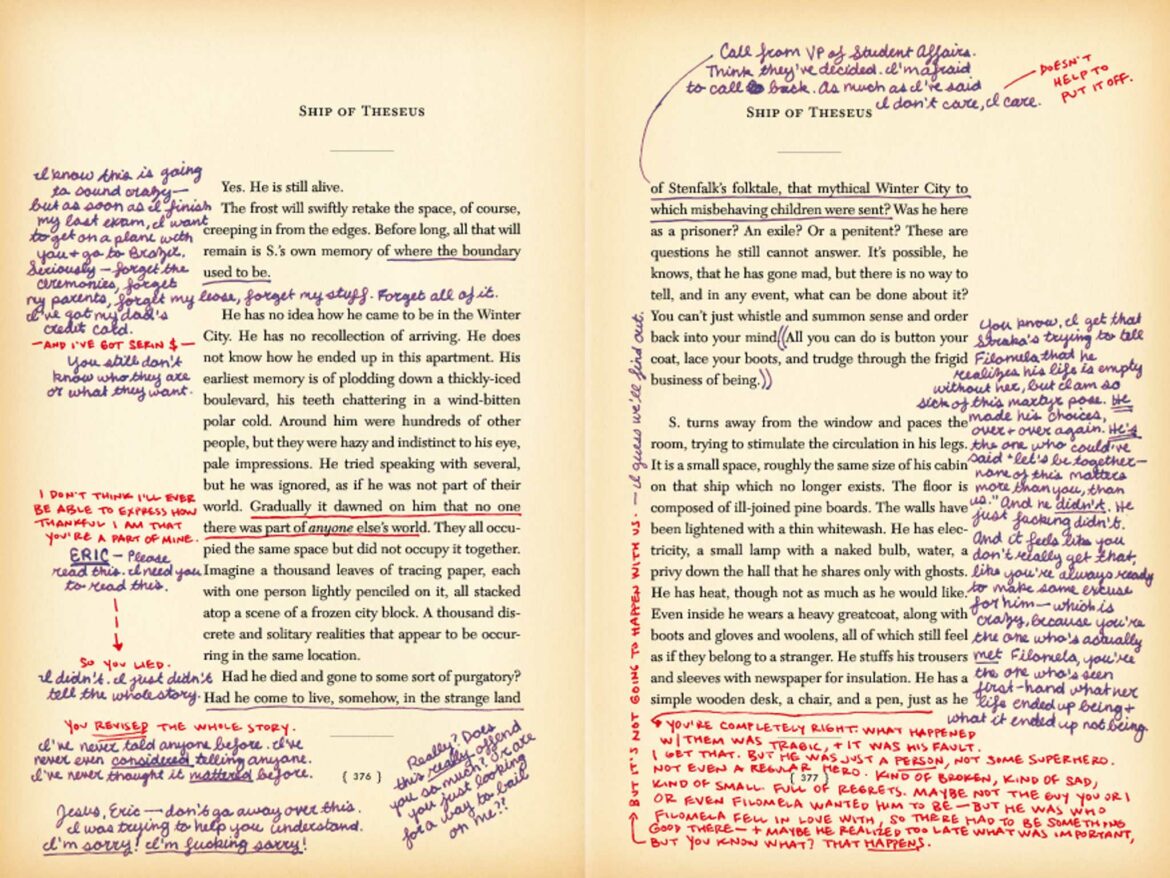 It wouldn’t be the same if you read this book on your eReader;  you wouldn’t be able to immerse yourself in it. Don’t borrow it. Buy it. Hold it in your hands. Sniff the pages. Be gentle when you’re flipping the pages and perusing through the postcards and letters. When you’re finished with it, reserve a special spot in your dusty bookshelf, place the book there and brag about it. Or better yet, read it all over again. Relish the good times! You owe it to yourself. 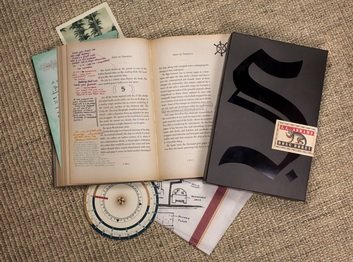 Introducing S by Doug Dorst and  JJ Abrams (seriously, is there anything he can’t do?), S. is their love letter to the written word.

The Creators of S.

I have seen J.J. Abrams’ TED talk at least seven times. I came across the five year old video sometime around November, so I think seven is a pretty big deal. I enjoyed it so much that I ran it on the Blu-Ray player just to show my dad why J.J. Abrams is the king of the universe.

His opening line was genius; I’m not going to spoil it, so you really have to watch it. In the eighteen minute talk, he mentioned his love for his late granddad, his obsession with odd little crafts like letterpress and magic, and where his fascination with mystery came from. He further talked about Lost, and how he learned very early in his career that you should never (ever) hurt Tom Cruise’s nose. I bet you’re curious now. Once more, you have to watch the TED talk.

So it shouldn’t come off as a surprise that book binding fanatic Abrams created S. Paired with Doug Dorst who wrote the splendid The Surf Guru: Stories, the team came up with the perfect book for every bibliophile.

While I consider myself an avid reader, I have to come forward and divulge that I had no clue who Doug Dorst was. Had it not been for S. I might not have done research on the American novelist. Fun fact: he was a three-time Jeopardy! winner and was in the same league as the contestants in the Jeopardy! Tournament of Champions. Doug Dorst is also the recipient of the 2009 Emperor Norton Award.

In a way, S. reminds me a lot of BookCrossing. It’s a concept whereby each person leaves a book in a public place to be picked up and read by others.

S. centers around the book: Ship of Theseus. It’s the last novel by a mysterious writer,V.M. Straka (fictitious author). What makes S. different is that the book is pregnant with the two characters’ handwritten notes, postcards, photographs and newspaper clippings. To put it simply, it’s sort of like the book version of Inception.

What I like best about S. is that it makes me feel like a detective. I feel like I’m a part of the team, joining in the fun. Of course, it is highly likely that S. is going to be a thousand times more mind-consuming than other books like Sophie’s World. Sure, you need to spend a great deal of time to invest yourself in the book. Nevertheless, this is a tremendous read. Rarely do I find a unique book like this.

S. has received rave reviews on goodreads, Amazon, and even Kirkus Reviews, an American book review magazine known for their high standards. S. was also awarded the Kirkus Star, an award to books of exceptional merit. Here’s the deal: if Kirkus gives a highly favorable review, you know it’s good.

Must See: League Of Legends Cosplay Done By Pros

XBox One and Playstation 4 Games: What to Expect in 2014