Plenty of people talk about the Bechdel test and what movies pass it, but not as many know what it is. Contrary to popular belief, it does not say whether a movie is feminist or not but has since been taken into to mean that. When it was first developed in 1985 it simply stated a movie should

2. These women must talk to each other

3. They must talk about something besides a man

In the 2000’s, people began looking to this test more and more for film and other media. The goal was to point out gender bias in film, which it does, and to get people talking. But it pushes down movies that should be examples to female viewers and occasionally holds up the wrong ones. So, should we continue to talk about it or is it time for a new marker?

A surprising amount of ‘genre’ films fail the Bechdel test. For years science fiction, fantasy and horror films were seen as ‘male’ territory but slowly (finally) this is beginning to change but if Bechdel is to be used then most of these films are not up to par.

Lord of the Rings

Movies that do pass?
Twilight 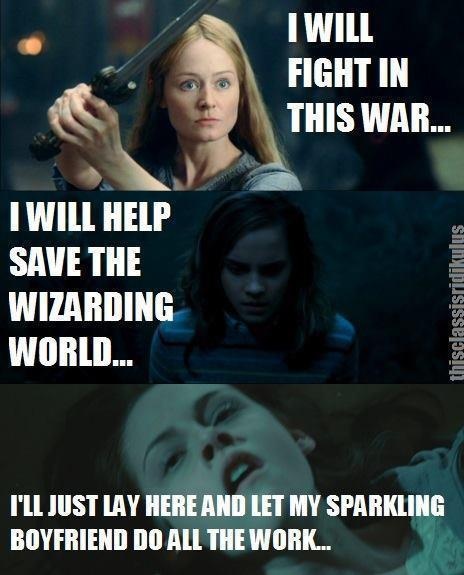 But Bechdel is not fair way to judge these films anymore. Saying Harry Potter doesn’t support female empowerment is wrong. Hermione Granger is one of the strongest female role models for young girls and that’s not counting other strong characters such as Professor McGonagall, Molly and Ginny Weasley, Lily Potter, Narcissa Black and even villainous women such as Bellatrix Lestrange and Dolores Umbridge. The reason Bechdel fails isn’t because it’s not feminist but because the story is told through Harry Potter’s point of view. He wouldn’t be around for a conversation between two women so the movie fails Bechdel, ignoring how Harry often discusses things outside of men with Hermione. Would be it great to see Hermione and Ginny having a conversation? Yes. But the books and movies are through Harry’s view point so we shouldn’t expect to see that. It doesn’t take away from the other strong characters.

Pacific Rim and Star Wars fail thanks to a lack of female characters. Both have technically more than two women but beyond the lead heroine the other women are insignificant and killed off quickly. Leia and Mako (Star Wars and Pacific Rim respectively) are both strong female leads but they almost never talk to another woman. The test fails to take into account how these are well-rounded women with their own back-stories and desires outside of their male counterparts, who serve a purpose beyond a love interest and who have their own character arc.

Lord of the Rings, as a film, does have three significant female characters and fails, again,because they do not talk to each other. Yet, like Star Wars and Pacific Rim, two of these three women serve very significant roles in the plot and the operate outside of male counterparts. Eowyn may partially be motivated by Aragorn to go to war but it is just as much a long professed desire to fight. and it’s great to see a female character going for what she believes in.

Yet Twilight passes. Regardless of one’s opinion of the films and books, there are not many who argue that Bella Swan is a great role model for young girls and she certainly pales compared to other women in this article. The majority  the second books is about Bella being so depressed after her boyfriend has left that she needs to put herself in danger just to feel closer to him. And she cannot have a friendship with a man that isn’t romantic as the boy she turns to has a friend becomes a replacement love interest. Compare this to Hermione Granger or Ginny Weasely who have no romantic friendships with male characters and who continue fighting for what they believe in after being left by their loves. It’s hard to argue for Bella being strong after that comparison.

Do some of these movies have issues with women? Yes. The lack of women in science fiction and fantasy is noticeable but it is beginning to change as movies like the Hunger Games, Divergent, and Edge of Tomorrow have stronger and more prominent female leads. The goal of the Bechdel test is to point out gender bias in film but it not longer works the way it should. Rather than talking about a movie where two women talk about clothing or their children, isn’t it better to talk about a movie that may have one woman but has a woman with her own story arc  and who is there to serve a plot purpose beyond being a love interest? Science fiction and fantasy movies need more women absolutely but don’t punish the ones who already exist. Let them be the basis to write not just more women, but better ones.