Home Gaming Ratchet & Clank is Back With ‘Into the Nexus’
Gaming

Ratchet & Clank is Back With ‘Into the Nexus’ 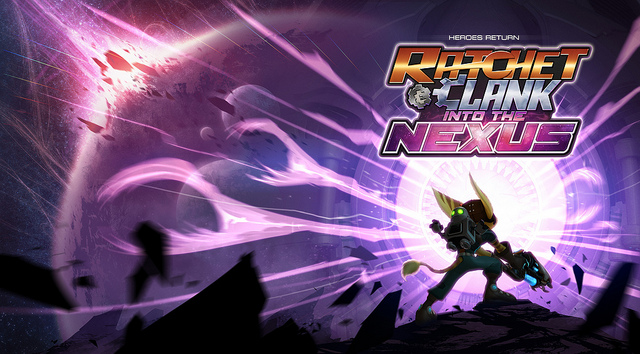 It’s a new era for console gamers. We’ve just experienced an E3 chock full of games set for the new generation of consoles. The PlayStation 4 is on its way to stores most likely around this holiday season. And Insomniac Games announces a new Ratchet & Clank for the PS3? That might sound weird to a few and think what you will, but it’s Ratchet & Clank! The lombax and little robot are perhaps my favorite PlayStation characters, so I’d be hard pressed to not be happy about seeing them grace my TV screens one last time before they’re upgraded into the realm of the PS4.

YAY! Take my bolts, Insomniac! All of them. I’m a sucker for this stuff. Let’s just hope it’s not as short as Full Frontal Assault though, yeah? The game is stated to be an epilogue to the Future series of Ratchet & Clank, taking place directly after A Crack in Time. The game promises the usual action and adventure platforming with the usual compelling story complete with all sorts of mushy moments at one time and gut busters the next! Ah, I can’t wait to get to pick up those ridiculous weapons and deliver hell to enemies blocking my path. Few games are more satisfying then that! One of the announced guns is called the Winterizer, which will turn enemies into Snowmen all while playing Jingle Bells.

As you probably saw in the trailer, Into the Nexus is going to be focusing on gravity puzzles a la Mario Galaxy. Ratchet and Clank will be experiencing levels and missions surrounding zero-g space and utilizing it to navigate around in a manner that hasn’t really been brought to life by the franchise, strangely enough. Clank puzzles are also confirmed to be gravity centric!

Sony made it abundantly clear that this game is a return to the franchise’s roots. I, for one, am super happy to hear that! For some reason, All 4 One, just didn’t feel right to me. Lots of franchises have games set for four player co-op these days, but Ratchet and Clank? And then we had Full Frontal Assault shortly after. It was a sort of tower defense game and frankly, that genre really isn’t my favorite. I don’t know, it seemed like the beloved duo was kind of missing their mark recently. But that’s okay, I’ll just go back to the PS2 games. There was a certain charm about those. Maybe its because good old nostalgia is playing a key role? Who knows, but I’m so happy to hear that Into the Nexus calls back to those roots.

Needless to say, this is going to be an awesome holiday season. We’ve already got tons of games to look forward to on the Wii U and hopefully the release of the PlayStation 4 (who knows, just speculating) but this too?! Oh. Oh yes. I knew I was going to have a few laughs around Christmas turning into Cat Mario and scratching Goombas apart in Super Mario 3D World but getting to blow enemies up with some ridiculous weapons as Ratchet and Clank? That puts a big ol’ smile on my face.

Ratchet & Clank: Into the Nexus is scheduled for release this holiday season for $29.99 both digitally and on a disc.