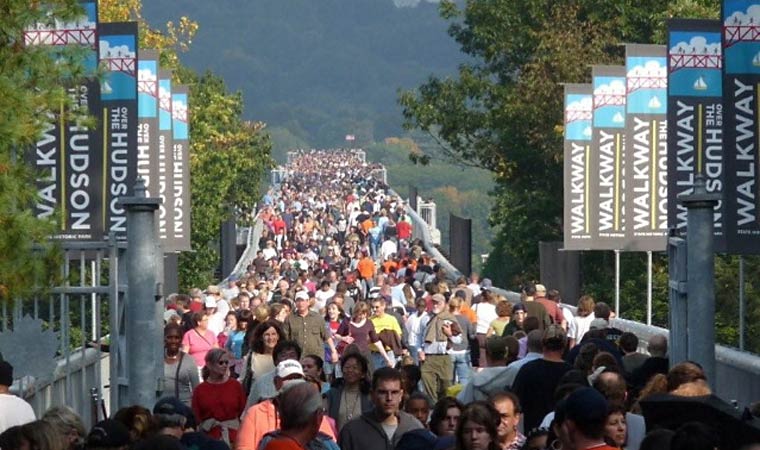 In keeping with its charitable reputation, search engine turned tech giant, Google, is reaching its long, wealthy arm into the non-profit sector to offer organizations a chance to win Google Glass, the training needed to use the technology effectively, and a $25,000 grant.

‘Giving Through Glass’, an initiative that Google began back in October of 2013, makes it possible for non-profit organizations to get their hands on the wearable ‘Glass’ device, as well as training and funds to further their technological advancement efforts.

By way of a tedious application that probes the possible uses for Google Glass within the organization, 5 non-profits will be selected from the pool of applicants to receive the generous prize package.

Walkway Over The Hudson

Recently, we spoke with ‘Giving Through Glass’ applicant, ‘Walkway Over The Hudson Organization’ (a friends group to ‘Walkway Over The Hudson State Historic Park’), in Poughkeepsie, New York. Converted from a railroad bridge and opened in 2009, ‘Walkway Over the Hudson State Park’ welcomes nearly 700,000 visitors annually (from every state of the union and 43 countries). As economically useful to the community as it is stunningly beautiful, this historic path across the Hudson River has effectively bolstered the economic revitalization of the Mid-Hudson region of New York State, generating more than $24 million in annual revenue.

Initially, we wondered how technology like Google Glass could be used to advance the economic and community-building efforts in a state park like ‘Walkway Over The Hudson’. Their answer to this question, provided by the Walkway Organization, was impressive to say the least:

Over the next six months, another 300,000 people will visit Walkway and, for the first time, access interpretative, historical and environmental content on their smart devices via QR codes in English, Spanish and Mandarin Chinese, replacing mobile phone call-in numbers and enhancing written signage. Glass will greatly expand this interpretive content for visitors with more in-depth cultural and historical information, enabling additional languages for non-English speaking users, improving way-finding and linking commuter rail and transportation with the 21 story elevator, opening June 2014. We will identify routes to cultural landmarks and historic buildings and use Glass to create guided walking tours via see-through mapping and directions. Coupled with geo-location and visual triggers, it will access relevant archived historical documents, narratives, images, and video. Visitors will get a rich and rewarding experience driven by their personal interests which amplifies their enjoyment. but will not intrude on the natural beauty of our unique park.

Visual triggers, language, and way-finding aren’t the only areas in which the ‘Walkway Over The Hudson’ team are looking to expand with the help of Google’s charitable contributions. In addition to the above-listed goals, the dedicated people at the park are looking to ultimately integrate a virtual tour that is centralized around Google Glass technology:

Our original ‘big idea’ was to create an amazing virtual tour for visitors to the Walkway. Imagine Native Americans canoeing on the Great Mohegan river, Henry Hudson sailing up the river in 1609, constructing the massive iron structure in 1888, locomotives steaming across the bridge until a fire destroyed the bridge in 1974, and the re-purposing of the derelict structure into the world’s longest elevated pedestrian bridge in 2009.
Many meetings, prototype goggles and revised budgets later, we got help from IBM and, later, Marist College to develop, fund and launch our digital interpretative “mobile web tour” using QR codes and smart devices. The program is a success (walkway.marist.edu) but Google Glass will create the incredible virtual experience we first dreamed of.

With a dream this big, Google seems like the perfect candidate to help the Walkway Organization address these monumental goals. The team at Walkway Over The Hudson went on to detail specific hurdles that will have to be addressed before their virtual reality tour can come to fruition. Even though the potential problems seem daunting, the staff seems very confident that Google Glass, and the technology behind it, can over come any potential issues:

Google Glass will address the unique challenges that impact using technology for educating and informing. Our outdoor environment, with wind, glare and noise, restricts visibility on smartphones and tablets. Audio can be heard, but higher volume intrudes on the experience of others enjoying the natural splendor. Shelters could fix these problems but will interrupt the purity of our spectacular view. Other technologies are expensive, have limited function and require too much technical knowledge for our core users. Glass addresses all of these challenges: it delivers a personal experience not intrusive to others; is a general purpose platform providing multiple concurrent functions; it has a growing developer community; and lends itself to our future, bigger ideas for way-finding, virtual touring and connecting visitors with the beautiful Hudson Valley.

The Walkway State Historic Park is open from dawn to dusk year round as weather permits. Hosting dozens of charity walks and events each year for organizations working in, but not limited to, Alzheimer’s awareness, AIDS prevention, cancer awareness, suicide prevention and women’s rights. In addition, The Walkway Over The Hudson Friends Organization continues to fund raise and provide valuable programming such as their mobile web tour, educational opportunities for its many visitors, as well as financial support for the long-term stewardship of the park.  Thousands of visitors come from New York City, less than a 2 hour drive, and the commuter train station (Metro North) is a 5 minute walk from the Walkway.

Google’s Giving Through Glass deadline for application submission was May 20th 2014. According to their Official Rules document, winners will be announced on the program website on June 17th, 2014.