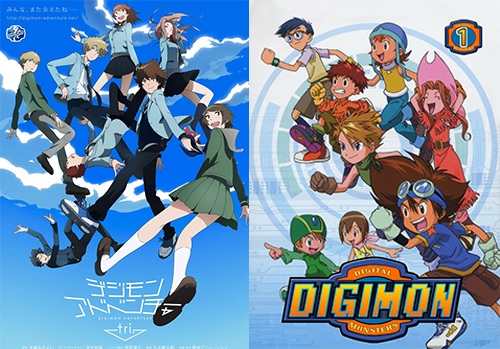 Franchise owners of Bandai Namco celebrated Digimon’s 15th anniversary in Odaiba, last August. Voice actresses, Chika Sakamoto (Agumon) and Mayumi Yamaguchi (Gabumon) made an appearance at the event, as well as several announcements that were made. Gearnuke explains:

“Several announcements were made at the event, including the reveal of a Movie Song Collection CD that will include track from each of the Digimon movies. Blu-ray release for all movies as well as Digimon Adventures box set was announced. The box will start selling in March and will include a special Drama CD, currently only a Japanese release has been confirmed. In toy news, some brand new Digivices were announced that contain the original 8 Digimon partners, they are now available for pre-orders.”

The Secret is Out!

During the celebration, a brand new season for Digimon, staring all the characters from Digimon Adventure One, was revealed. Bandai Namco also promised to appeal to the English speaking fans. This is a no-brainer, since Digimon is well known among the English anime fans, especially if it is going to feature the original cast that they know and love.
Nothing much is known, other than the very little artwork, and the trailer stating that Tai, the leader of the eight digidestineds, is going to be seventeen and in high school. The series is going to take place in Digimon Adventure Two not only because of Tai’s age, but because it has been confirmed that it will continue in a few years of where Digimon Adventure Two has left off. Though the story does take place in the second season, the other four digidestineds (Davis, Yolei, Cody, and Ken) that first stared have not been revealed in any of the artwork. They’ll probably show up later as more information is given-out. There has also been images floating on-line with all of the eight digidestineds’ Digimon in their mega evolutions, and supposedly their Dark evolutions.
The Dark versions of them could be clones designed for evil purposes, and it is up to Tai and the others to stop them, or the plot may have something to do with the digidestines being able to tap into their dark sides. It’s interesting to see Black Wargreymon, who supposedly died in the second season, is among these dark evolution images. He too could be making a come-back. On the other hand, the mega-evolutions are not a surprise, since all the Digimon series like to present new evolutions, and two other digimon from the group can already do so.

The new title is called Digimon Adventure Tri. The three names behind creating this new series are Atsuya Uki, (Cencoroll, Oreime) who will be doing the character designs, Ketiaro Motonaga (Persona 3 The Movie #3: Falling Down, Date a Live) will be the series’ director, and be developed by Yuko Kakihara (Stitch! Persona 4: The Animation).  More information to be displayed from this web-site is predicted in April 2015, after the series finally hits the airwaves in March 2015!

How to Save Your iPhone Battery Life While Using iOS 8

How to Properly Backup and Restore iPhone Data