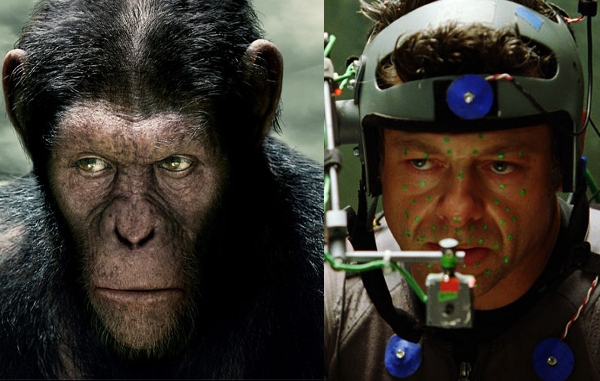 My mother has never had much interest in science fiction and fantasy stories. I definitely inherited my love for all things strange or magical from my dad, but long ago Mom introduced me to something I never thought could be found in her collection. The Planet of the Apes series. The idea of people costumed as humanoid apes capturing and studying the remaining humans in the area wasn’t very appealing to me, and to be honest after watching the film my opinion wasn’t altered.

In 2001 Tim Burton attempted a reboot of the concept starring Mark Wahlberg and, of course, Helena Bonham Carter. Long story short, it was ill received.

In 2011 The Rise of The Planet of The Apes premiered, and in it Andy Serkis captures the essence of a chimpanzee whose intelligence has allowed him to evolve into the character we are introduced to in the 1968 film. Through performance capture, we see the animated Ceasar’s eyes and fur, but are actually viewing Serkis’ performance in each scene.

Andy Serkis is no stranger to motion capture and animated acting, as he has portrayed many characters in which his face is hidden. Andy’s voice is connected to a few truly iconic characters.

Serkis stated that he is reminded of his work as Smeagol and Gollum on a daily basis. That being said, his role in the world of Middle Earth is what put him on the map as a motion capture performer. His famous hiss can be heard across countless lands. Precious, isn’t it?

Although Brent McIntyre donned the suit in Fellowship of the Ring, Andy Serkis actually voiced The Witch King.

In 2003, Lord of the Rings parodies came at you from every angle. In the Simpson’s episode titled Dude, Where’s My Ranch?, the family encounters an animal-like elderly man with a familiar voice and stature. Serkis himself lends his voice to this Gollum-like being.

In Peter Jackson’s adaptation of this epic story, Andy Serkis is seen on screen as Lumpy.  But his larger contribution to the film comes in the form of the great black ape himself, Kong. Another fantastic motion capture performance.  The duet scenes between Kong and Ann Darrow are elegant and delicate. I know in my case, many tears have been shed in those quiet moments. Simply beautiful.

Steven Spielberg was introduced to the Tintin books while working on Raiders of the Lost Ark, and delved deep into the cherished stories immediately. Knowing that he wanted to bring Tintin to life the best way he could, Spielberg contacted Peter Jackson and Weta Digital. Thus the casting of Andy Serkis as Captain Haddock, and yet another performance capture project.

Along with his many acting feats, Serkis has shown his chops behind the camera as well. He worked as the second unit director for the entire Hobbit trilogy, of which the final chapter will be released in December 2014.

Although Andy has been nominated and awarded honors for his work in motion capture technology, he has yet to be nominated for an Oscar. The Academy has actually never nominated someone in an acting category for their motion capture performance. Many have noted that Andy Serkis’ performance in The Rise of the Planet of the Apes deserved far more recognition than he received, and I completely agree. It may not have been my favorite film of the year, but it was a breakthrough in the world of detection film-making.

With that being said, I am very interested in seeing Dawn of the Planet of the Apes. After our single word from Caesar in Rise, the thundering “No!”,  could we hear more from the creatures this go around? If so, will there be more of a possibility for Serkis to be nominated for his mo-cap performance?

Only time will tell, but I believe that it is finally time to pay credit where credit is due.

Cryptolocker and the Escalating Sophistication of Malicious Internet Attacks