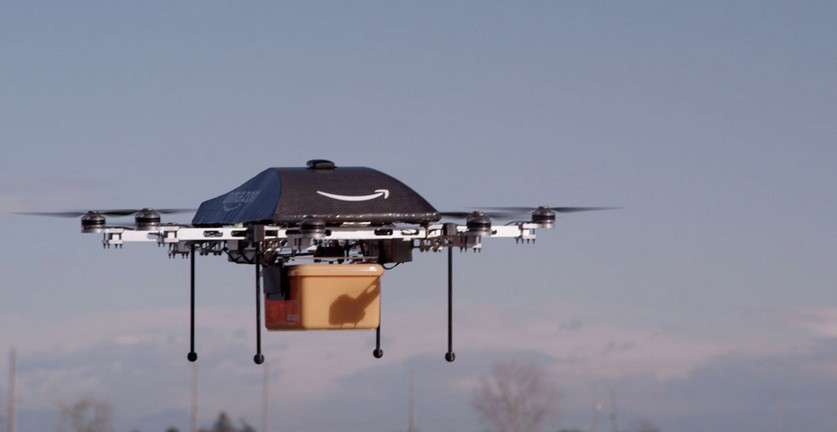 I know. This news seems like ages ago and there is no excuse. I should have written about this earlier. If you must know, I needed to let the excitement to settle and write a post that wasn’t too emotionally-charged.

By now you should have heard about Amazon’s new plan: to deliver packages using drone technology. Currently the world largest online retailer, Amazon.com, Inc sells a wide range of products such as video games, furniture and books. To set apart from its competitors, the American international company also produces electronics like the Amazon Kindle e book reader, which is widely used by people across the globe.

When CEO Jeff Bezos announced his company’s comprehensive plan of action, it received a mixed reaction. The objective of this new delivery system is to send packages to customers in 30 minutes or less using aerial vehicles. And if you think the idea is ludicrous enough, think again. These aerial vehicles do not have a crew or staff operating them.

After the action plan was brought to public notice, it sparked off hilarious tweets on Twitter. American author and blogger, Ana Marie Cox poked fun at Amazon’s drone technology and tweeted,” Elderly man in red suit, white beard, with 8 hooved accomplices suspected in sabotage of Amazon drone research.” Other noteworthy tweet is by American football tight end, Tom Crabtree. He reminded us of the humor of it all by a tweeting a message that says,”Just so you guys know, I’m keeping every Amazon drone that comes to my home.”

Label me as a Debbie Downer, but I think Amazon’s new scheme sounds too good to be true. Don’t get me wrong, I love technology. I really do. I’m the girl you often see using her up to the minute gadgets and constantly trying out new apps and soft wares. But the thing is, we have to be realistic.

Amazon is not the only company who have big dreams. Zookal, a textbook rental set-up based in Australia, who’s also one of Amazon’s competitors, is aiming to use a drone delivery system in the beginning of 2014.

America is experiencing an extreme cold weather and I can’t but help but wonder what’s going to happen to the drones if they are sent out during a heavy downpour. Or worse, what if there’s a thunderstorm? The delivery can’t be only delivered on a blue summer sky with cotton candy clouds. If the company’s absolutely certain to go forward with this ambitious idea, it’s either go big or go home. Drone expert and associate professor of aeronautics and astronautics at the Massachusetts Institute of Technology, Mary Cummings made a good point about Amazon’s drone delivery system. She pointed out that while she’s fully behind the idea, there are a still lot of simple details which they absolutely cannot ignore.

For someone living in Singapore, it is highly unlikely I’d see this happening in my country anytime soon. Sure, Amazon’s drone delivery will not be in full operation till four, five years down the road but I’m still not fully convinced.

With a proven track record, Amazon is a huge company and it has achieved so much. If there is going to be a company that’s going to consistently beat their rivals at their own game and achieve exponential success, it’s them. I’m skeptic, yes. But at the same time, I can’t wait for 2018 to find out more about drone technology. Furthermore, I would love to be proven wrong.