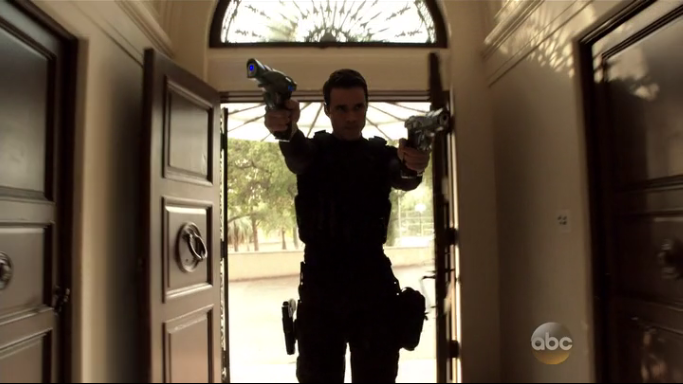 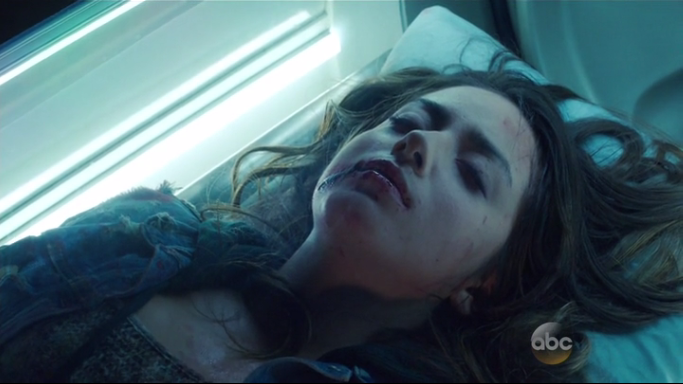 Big bombs dropped this week, guys, and I’m not just talking about the Night Night Gun serum Centipede seems to have gotten its hands on. After last episode, “Seeds,” Team Coulson has found a new lead to the Clairvoyant and Centipede in Ian Quinn, and is determined to track him down. After determining that a package from Cybertech Inc. is bound for Quinn, the team plans to plant a tracker on it and use it to locate the elusive sleazeball. Of course, the package is being transported covertly on a train, which means that the Team will have to go undercover– and that this is the obligatory Train Heist episode.

Ward and May team up to find and tag the Cybertech package while Skye and Fitz prepare to track it to Quinn, and Simmons and Coulson pretend to be a bickering father-and-daughter pair to run interference. Stan Lee shows up in his required MCU cameo to cast some shade on Coulson’s fake parenting skills after Jemma wails a sob-story capable of sending those with severe second-hand embarrassment out of the TV room. May also reveals that she told Coulson about their affair to Ward, who seems to take all kinds of offense to her telling, you know, her long-time friend and superior officer about what’s going on in her life and on his team. As Ward mentions, though, everything their team encounters seems personal now; Coulson and Skye have both changed, become more dogged and focused.

May spots the package, then everything goes wrong– the comms get screwed up, Ward is attacked by a woman with a knife, May goes missing, and, when Coulson and Ward are knocked off the train, it disappears into thin air. In a nice use of flashbacks, we see what went wrong from the point of view of each member of the team– Coulson and Ward getting knocked off the train, realizing May is missing, finding a hotwired car in a nearby, and driving back to the Bus (where Coulson gives Ward a great “I trust May not to jeopardize our team by sleeping with you, but I don’t trust you to handle this maturely” smackdown speech) to rendezvous with the Italian police team they worked with to find the package– only for May to show up and stab the Italian police chief in the back.

From May, we see her escape from a shooter on the train via parachute, only to find Coulson and Ward knocked out cold on the ground– with their eyes open. Determining they’ve been infected by some sort of airborne toxin, May goes about hot-wiring the car for escape but is taken hostage by the Italian police team, who was working with Quinn’s men all along. She is tortured for Coulson and Ward’s location (guess they didn’t scan the area too hard), and uses the knife stuck in her shoulder to escape, track the team leader down, and execute him before he can shoot Coulson.

They manage to track down the train and on it, find Simmons, who took a similar Night Night Grenade to the stomach to protect Skye and Fitz. Another flashback shows that Skye and Fitz followed the Cybertech package to the rendezvous, where, sure enough, Quinn appears. They activate a spare tracker to let Coulson and the others know where they are, and Skye, taking things personally for both her and Coulson, goes in with the Night Night Gun to investigate. Fitz starts disabling their cars outside.

In the basement, she finds not only the Cybertech package but much more– an unconscious Mike Peterson in some sort of stasis chamber. Quinn arrives and, holding a gun on Skye, uncorks Mike and explains that he gets his orders from the Clairvoyant now. The package, it turns out, is a bionic leg for Mike, to “help him fulfill his orders.” When Skye urges Mike to escape with her– not knowing he has an Eye Bomb implanted– Quinn asks what Mike would do if Quinn asked him to kill Skye to hurt Coulson. Clearly uncomfortable, but unable to rebel, he responds, “Those aren’t my orders. She’s not who I’m supposed to kill.” 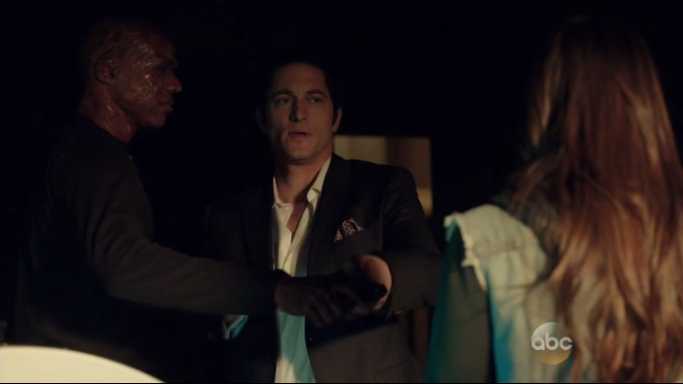 As Mike leaves, Skye tries to run after him but is shot twice in the stomach by Quinn. She tries to go for help but can’t even move or scream for help, and passes out. Finally the rest of Team Coulson arrive and lay siege to the mansion.

Mike fulfills his orders by murdering the Cybertech and Italian police entourage, who failed in their mission by leading S.H.I.E.L.D. right to Quinn. As Team Coulson mops out the mooks outside, Mike receives orders via Eye Bomb not to engage with them, and instead escapes the mansion. Team Coulson captures Quinn and Simmons manages to stabilize Skye in the stasis chamber, but there’s no guarantee of her survival. The team falls apart as her life hangs in the balance.

Mike watches his child on the playground, and asks his handler via Eye Bomb whether he’s allowed to see his son. His request is denied, and the camera zooms in on the specs of his cybernetic leg– confirming that the Marvel Cinematic Universe has its third minor supervillain, Deathlok. 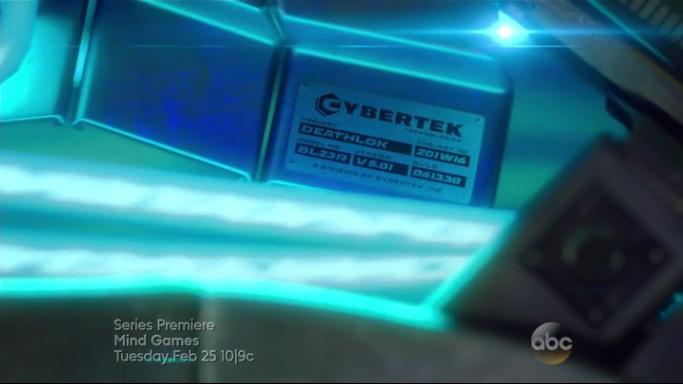 Could this near-death experience effect Skye as a human 0-8-4? Does Ward seem ready to ragequit Team Coulson? What does the Clairvoyant have in mind for the newest victim of Project Deathlok? Let us know your theories in the comments!