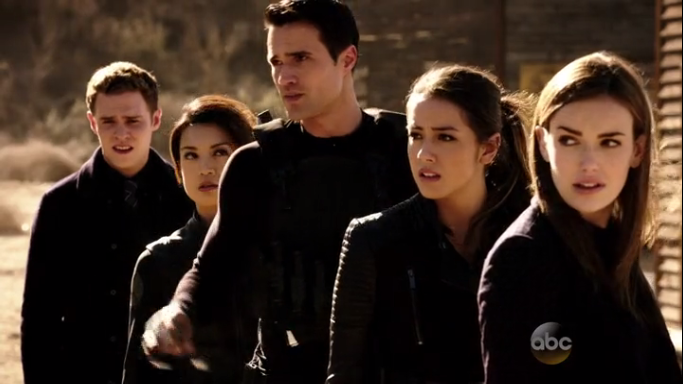 Warning, this article contains spoilers for previous Agents of S.H.I.E.L.D. episodes and Marvel‘s The Avengers. 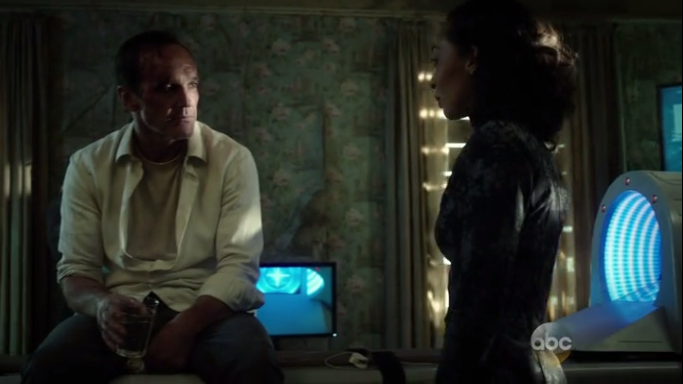 This is it! They’ve been teasing us for ten episodes, but we’re finally going to find out what happened to Coulson after he took a scepter to the sternum in The Avengers! And after that wreck of a mid-season cliff-hanger, they have a lot of making up to do to us, the audience. (“He’s right behind me, isn’t he?” You’re killing me, writers.)

Sadly, the episode opens with Team Coulson-sans-Coulson doing some very nice teamwork shenanigans in order to catch a black market seller of Chitauri metal. Ward and May are kicking butt, FitzSimmons are at their scientific best, and Skye is well integrated into the team doing her whole hacking thing. Everyone’s strengths are utilized and it’s a nice bit of montage reminiscent of 0-8-4 (Coulson being kidnapped/killed really is great for bringing a team together). I say “sadly” because the fact that they need this guy to track down Centipede really means that there was no secret plan to follow him; Mike hid the fact they wanted Coulson from the Team and then died for no understandable reason.

The Bus is now swarming with SHIELD agents, including Agent Victoria Hand (who we last saw when she gave the order not to extract Ward and Fitz from a black zone in The Hub) who’s suspicious of why the entirety of SHIELD is out looking for one lone agent. As their suspect is being interrogated, she also kicks Skye off the mission for not playing well with others, supported by May’s agreement that Skye isn’t going to be any help on the plane. Ward and FitzSimmons summarily help Skye escape to explore her own leads.

Meanwhile, Coulson is being tortured by Po in some creepy, mannequin-infested ghost town. Po uses a combination of tasers and bringing up Coulson’s abandonment issues (apparently his dad died when he was young, and his mother is also dead– fair enough, this is both Marvel and Disney now, and he’s at least in his 40s) to physically and psychologically torture him. Then Po sticks him in a machine that makes him relive his memories of “Tahiti.” Even when he escapes, Coulson can’t get far because of the sheer remoteness of his location: the middle of a desert. 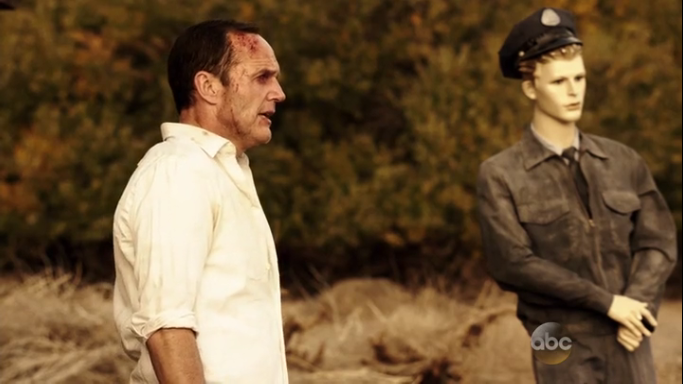 Sick of their suspect not giving up his list of clients, Ward and FitzSimmons step in to do some interrogating of their own behind Hand’s back. Ward slips into the interrogation room and offers their Chitauri metal smuggler a chance to talk. When he declines, FitzSimmons opens the roof of the plane up. Faced with the choices of talking or getting sucked out of a plane, the smuggler’s tune changes pretty fast. With the new intel, Hand starts ordering strike raids on all of the Centipede sites they can find. Ward takes the chance to confront May about endorsing Skye’s removal from the mission, to which May responds that she told the truth: Skye was no help to the mission on the plane. Off the plane, away from the watchful eyes of Agent Hand–that’s where she knew Skye would do the most good.

Skye keeps running into trouble in her solo-investigation due to her anti-hack bracelet, so she devises a way to get Lloyd Rathman, a banker with ties to their Chitauri metal scavenger, to follow the money trail for her. She crashes his car, invades his home, and adorably impersonates Melinda May to get him to open the financial files. (It’s a bit like she’s playing dress up in big sister’s clothes.) She uncovers a money trail leading straight to a small property in the Mojave Desert, close to a known Centipede lab. While Hand takes the SHIELD agents to clear out the lab, the rest of Team Coulson goes to meet Skye there.

Po is still failing to get any sort of answer out of Coulson, and is not happy when Reina shows up to chide him for his aggressive tactics. He insists that it’s what the Clairvoyant would want and demands to know why she’s not with their “other patient.” At that moment, the Clairvoyant calls, asking to speak with Reina. She’s ecstatic. She hands the phone back to Po, and Po’s face gets all blotchy when it touches the phone, and he collapses, dead!

Reina begins a softer method of gaining Coulson’s collaboration, focusing more on the reasons why he owes it to himself, instead of Centipede, to remember what truly happened to him. She points out all he’s given up for SHILED: his family, the chance at a normal life, and his beloved Portland cellist who still believes him dead. She tells him that the Clairvoyant has seen how the buried memories keep him up at night, and asks him to consider why SHIELD would lie to him about his own death. Coulson breaks, and begins remembering the truth: that SHIELD revived him and kept him trapped in agony for days, begging for death, before rewriting his memories.

Skye and the others bust in and rescue him, taking Reina into custody. Coulson tells them he revealed nothing, which was true. But now he knows the torture Fury and Hill put him through to revive him. Why? For what purpose? He confronts one of the doctors from his memory who apologizes and admits that no good doctor should have allowed him to experience pain like that.

In the stinger we find out that Mike Peterson is, in fact, alive– but has been outfitted with an eye-bomb by Centipede. The writers win back the points lost for meaningless character death, but not for the ones they lost for having him keep secrets from the team in the first place.

So many questions that are still unanswered. What plans does Centipede have for Mike? Why did SHIELD revive Coulson? What’s up with Skye’s parents? Let us know your theories in the comments!