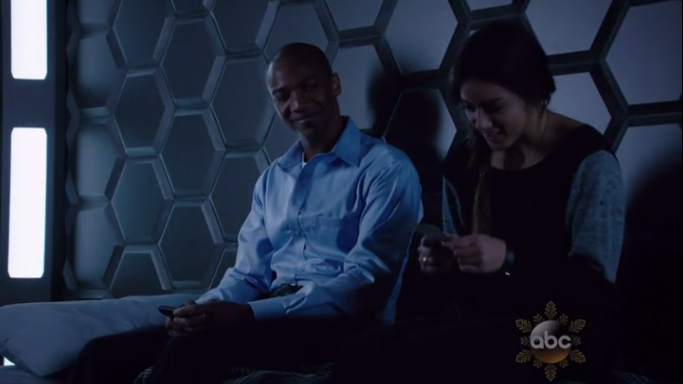 Warning: this article contains spoilers for previous Agents of S.H.I.E.L.D. episodes and multiple links to TV Tropes. Click-through at your own risk.

A mid-season finale can be expected to be exciting; plot points come together, action comes to a head, the drama heats up, and there’s usually a pretty serious cliff-hanger to keep the audience on the hook over the Christmas break. A show that’s gotten some serious buzz due to the fact that Joss Whedon and his writer’s posse are involved in its production can be expected to be self-aware of its genre and treat its tropes with humor and intelligence— considering Whedon’s well-known for such awareness in his other works.

Neither expectation was the case. Sorry, it had to be said. Plenty of “exciting” things happened, of course– May crushed Skye’s dream of finding her bio-parents, Ward got shot (whatever, he was wearing body armor), and Coulson got kidnapped by Centipede. But they also played Right Behind Me straight and that is just lazy, lazy, unfunny writing. While there’s a little enticement in the fact we’ll likely learn what happened to Coulson in “Tahiti” after his death (It’s A Magical PlaceTM  ), the episode gave us our drama but didn’t seem to put its heart into it.

The episode starts with Edison Po (the guy in prison from “Girl in the Flower Print Dress”? Raina’s boss?) gets busted out of prison by three improved Centipede super-soldiers. Coulson decides it’s time to go after Centipede directly– to cut off the head, as it were, even if that saying applies to a completely different animal. To this end, he enlists the help of Mike Peterson  from the pilot, who has first-hand information about the way Centipede does things from his time as a lab rat. And speaking of– apparently all those stabilization and upkeep problems that Centipede has been trying to solve all season? The ones that make their soldiers explode and expire? The Night-Night Gun solved those when Ward shot him, even though it was not designed to do that in any way. Peterson conveniently won’t explode or lose his powers. Not that that makes Ward or May trust him much (leading Ward to the previously mentioned Right Behind Me moment).

One of the super-soldiers is identified, and they trace his location to California. They plan to interrogate him as to Centipede’s motives and whereabouts, as well as the identity of Po’s mysterious adviser, the Clairvoyant (who Phil keeps insisting can’t exist because they aren’t in the Index, and because psychics and telekinetics definitely don’t exist anywhere in Marvel canon). When they finally arrive in California, there’s an ambush waiting for them. Ward pushes May out of the way to take a punch, and Peterson gets a metal rod to the ribs. Two of the Centipede-soldiers run off– and the third gets killed by the same sort of killswitch in his eye as Amador had in “Eye Spy”– Centipede was behind that too. Po sees a screenshot from the eyecam of Peterson and Coulson and realizes that they’ve found the solution to move their evil scheme onto “Phase 3.”

Seemingly having hit a dead-end, all descends to drama on the bus. May berates Ward for taking a punch for her in the brawl and he tells her it was a “totally tactical decision” and “not to flatter [herself].” Ward, was it also a tactical decision to make jokes about “playing well with others” earlier in the episode? Pretty sure you’re the one flattering yourself, and it’s not attractive. Skye overhears their conversation and May reacts defensively, telling her the “truth” Coulson doesn’t want her to know about her search for her parents– that it isn’t S.H.I.E.L.D.’s priority to help her and she has to decide what’s more important, finding her maybe-mom or being part of S.H.I.E.L.D. Coulson also talks to Peterson about his son, about making up for his past bad actions by being a hero and a dad for Ace, instead of hiding. So Peterson goes to call his son and– oh no! Raina’s got him kidnapped, and wants to make a trade.

They arrive at the trade-point and Coulson and Peterson go to make the trade– Peterson and his Night-Night Gun improved Centipede powers for Ace. Simmons rubs some sort of odorless tracking substance on Peterson’s hands so they can find and rescue him afterward. Ward sets himself up as a sniper in a horribly-positioned place where he can’t see anything, and the rest of the team waits in the van. That’s when Raina reveals the trade isn’t for Peterson at all– it’s for Coulson, and Peterson, having learned nothing about setting a good example for his son, has tricked them into the trade! Coulson still goes because Ace is in danger, and Peterson wraps his hand around Raina’s neck and threatens to choke her, but in the end Phil gets taken, Peterson blows up as he attempts to be a hero, Ward gets sniped, and Raina reveals they want to know about the day after Coulson died (dun dun dun!).

But maybe the episode will make sense in retrospect. Maybe the next episode will reveal the trade to have been a ploy all along so that the team could find Centipede’s base. Peterson wouldn’t have dumbly not informed the team that the trade was for Coulson, even though it was a sensible option, and would therefore save his character development from backsliding for no reason. Heck, maybe that’s the plan. Maybe he choked Raina to transfer the odorless tracking signal and FitzSimmons is about to start trailing her, getting ready to bust in, save Coulson, and take down Centipede.

I guess we’ll have to wait til January to find out.

Did you like the episode? What burning questions do you hope to have answered when the show comes back? Let us know in the comments.