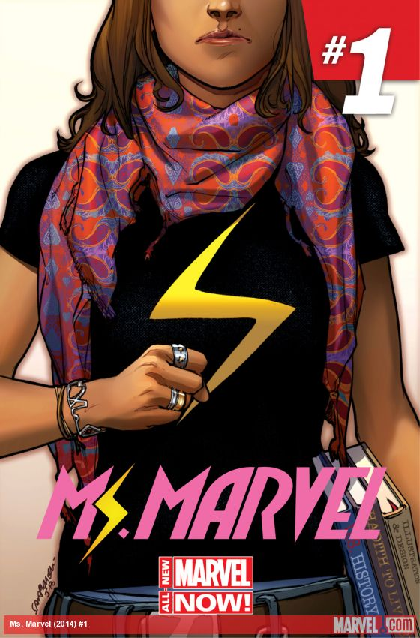 When a comic brand introduces a legacy character, there is always controversy. Even the classic Ms. Marvel, Carol Danvers, received flack and backlash for fans when she was promoted to Captain in July of 2012. There were complaints about her upgraded costume. There were complaints that the Ms. Marvel name was too iconic to leave behind. There were complaints that she didn’t have the right to the Captain Marvel title, despite an intricate and long-standing character history with its original owner. Now that a new Ms. Marvel Legacy has been announced, there’s controversy about that as well– although, this time, it’s reaching outside the sphere of die-hard comic fans and into a political, cultural, and religious realm. 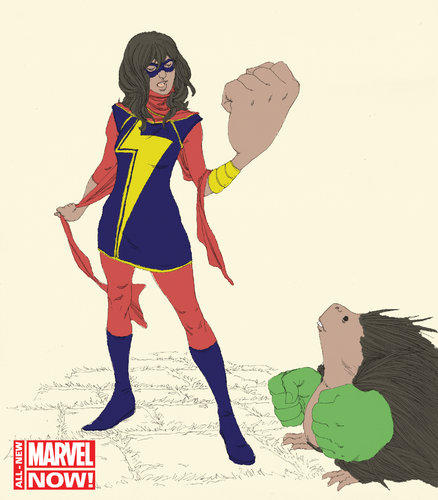 This is Kamala Khan, a sixteen year old girl from Jersey City who idolizes Carol Danvers, and whose super-powers allow her to change the shape of her limbs to fight crime. She also happens to be an American-born Muslim, and the new Ms. Marvel. While many fans have embraced the announcement eagerly, even starting the Twitter hashtag #KamalaKorps to stand by Captain-née-Ms. Marvel’s #CarolCorps, the writers have prepared themselves for backlash. Sana Amanat, the series editor and one of two Muslim-American women working on the project (the other being writer G. Willow Wilson) admitted “I do expect some negativity, not only from people who are anti-Muslim, but people who are Muslim and might want the character portrayed in a particular light.”

The good news is: the visible internet blow-back has been relatively small as far as outright widespread Islamaphobia. Minus an infamous and now-deleted tweet on comedian Colin O’Brien’s twitter and the usual YouTube comment fringe complaining about political correctness, a trend of fans directly rejecting Kamala on the basis of her religious beliefs doesn’t appear to have organized enough to damper the general praise. In fact, much of the backlash appears to be those who are concerned that this new comic will not be sensitive enough to the cultural ground it’s portraying– concerned the comic may paint Kamala as a modern teenager but the Khan family in too stereotypical a light.

Religion News ran an article expressing concern over the description of Kamala’s brother as a “conservative” Muslim, saying “When talking about Muslims, ‘conservative’ is often code for someone who embraces a fundamentalist understanding of Islam, which is viewed as just one step short of becoming a terrorist.” Writer G. Willow Wilson’s response?

@WajahatAli I love how the author flat-out stereotypes characters in a book that hasn’t even been released yet.

G. Willow Wilson has also fielded other questions and concerns about the new character from fans. In a pair of tweets on November 9th, she reassured one woman that, despite Kamala looking up to Carol, she was not “aspiring to normative whiteness” to make her great, but simply expressing what it’s like to be an American teenager. “There is great pressure on young women to look/act/behave a certain way,” she tweeted back, “That’s not what makes her ‘great.'” She also responded to the fan’s further concerns about the quality of the conservative brother’s character by saying, “I come from a very conservative community. Don’t judge a book by its cover.” 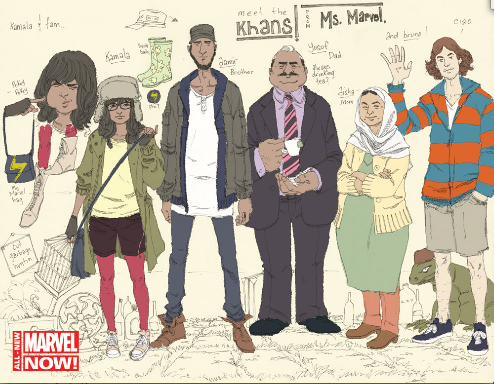 Kamala with her family and friend, Bruno.

The majority of response, though, has been positive. From media outlets like the original New Yorker article and the Huffington Post to social media on the aforementioned Twitter tag, on Pinterest and Tumblr, Facebook and more, fans are seeing this as a step forward. “Ms. Marvel will open the eyes of a new generation of comic book readers to the mostly unseen, unknown complexities of being a Muslim-American woman,” writes Rula Jebreal of the Daily Beast. And she’s not wrong, at least in intention. Both Amanat and Wilson have pulled from their own experiences as Muslim-American women to write the comic. “I wanted Ms. Marvel to be true-to-life, something real people could relate to, particularly young women,” says Wilson. “High school was a very vivid time in my life, so I drew heavily on those experiences.” As for Amanat, the concept of Kamala the superhero was indirectly inspired by her childhood. “I was telling [Steve Wacker, Marvel editor] some crazy anecdote about my childhood, growing up as a Muslim-American.” That’s the moment it all started.

Other fans find even more reasons to be happy about the new Ms. Marvel release. In an editorial for the Hairpin, Jim Berhle exalts how proud he is as a citizen of Jersey City to finally get a local superhero of his own. “I tweeted the mayor about having a parade and he tweeted back that they were on that.”

The first issue of the new Ms. Marvel title will debut in February, with an official character debut in All New Marvel NOW! Point-One #1 in January. If you’d like to catch a glimpse of Kamala before the new year starts, she’s already appeared in Captain Marvel #17.

Are you looking forward to the new title? How do you feel about a long-time character like Ms. Marvel getting a legacy character? Let us know in the comments!

How to Set Up Google Sync With Your iOS Device