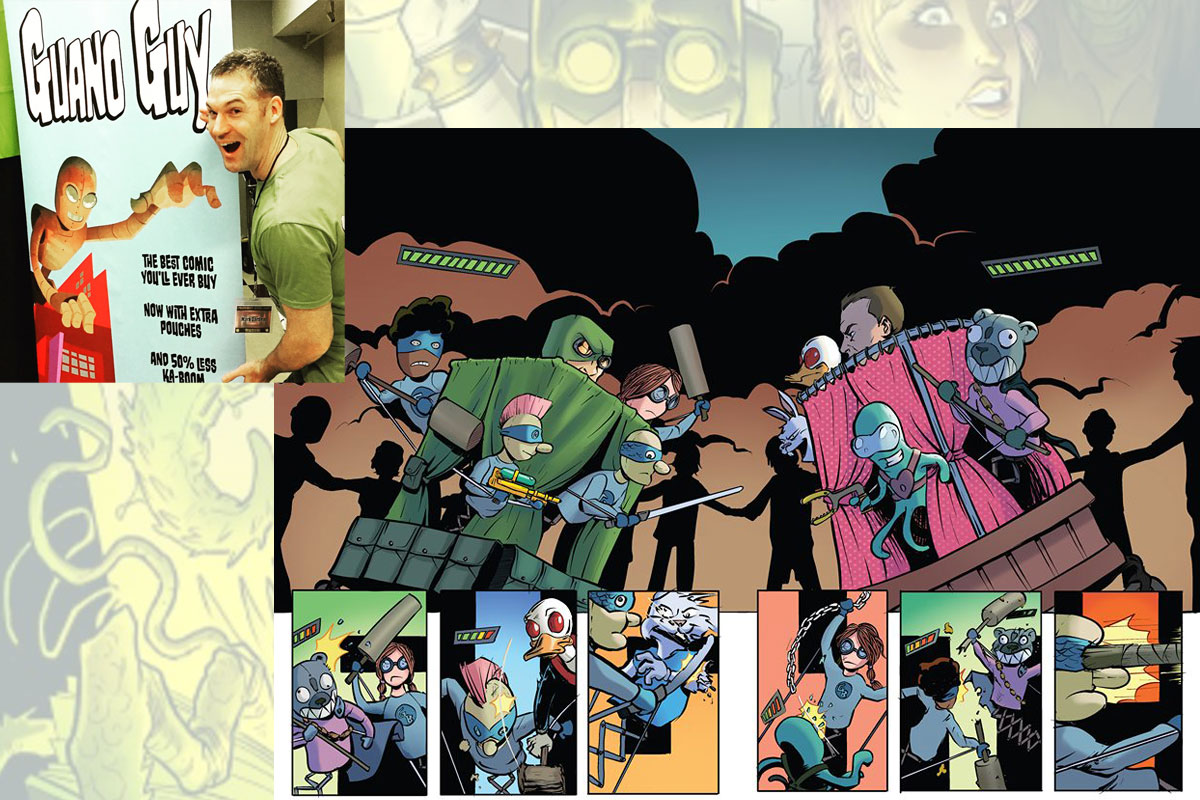 If you love humor, chaos, a wee bit of sarcasm and wit, then Mark Darden’s “The Guano Guy” is a must on your to-read comic books list from the growing catalog of Terraform Comics LLC.

As a young boy, Mark developed a love for comics from titles such as Mighty Mouse, Casper the Friendly Ghost, and Richie Rich, but he had to hide his comic books when his sister squealed to their parents about the adult subject matter of Batman 404. Undeterred, he continued to read in secret, inspired and entertained by unconventional heroes.

Mark had a nine-year military career as an aviator, qualifying for Special Forces before an injury made him pivot toward a new direction. Returning to his artist roots he went into graphic design and worked for the board and card game industry. Darden produced such works as Infiltration, Nexus Ops, and Masques, and previously worked with AEG, Chaosium, and finally Fantasy Flight Games. It was during this time when Mark launched a webcomic series called “When Claws Were Cool” that evolved into “The Guano Guy” comic book.

Perhaps taking from his childhood experience, Darden wanted to make When Claws Were Cool a book that could bridge the gap between adult humor and family entertainment. It became a series of what-if scenarios taken from the book of Mark’s life, his heroes, and social media influences.

Who is The Guano Guy?

Ask Mark Darden about The Guano Guy and he’ll tell you it’s a mix of The Tick, Batman ’66; G-rated Deadpool and Seinfeld with superpowers. Guano Guy is a self-serving, self-promoter whose goal is to get rich and have celebrity status. He doesn’t really care that he saves the day as long as it boosts his brand. With dripping sarcasm, witty comebacks, and a gift for harassing criminals, Guano Guy dons his green suit in pursuit of fame and fortune with an occasional moment of redemption.

Embracing the independent comic scene, Mark loves to take every opportunity to engage with his fans, fellow artists and comics creators.

Mark brings a special energy and passion to his work that makes us particularly excited about this I.P. “Guano Guy” is an exciting character, full of humor and wit, and it reaches a broad audience. We couldn’t be more proud to have Mark and Guano Guy join the Terraform Comics family.

The Guano Guy launches on Kickstarter on September 15, 2020. Follow Mark Darden on Twitter and Facebook. Keep an eye out for his livestream appearances and give The Guano Guy his greatest desire, a little social media love.