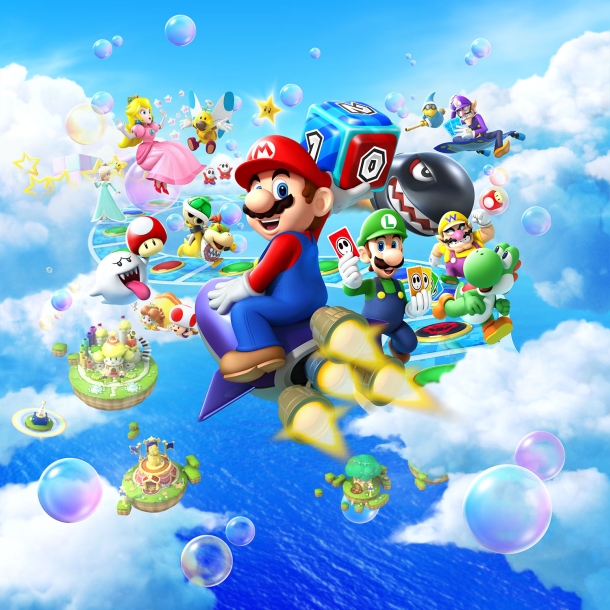 Never in my life did I ever expect Mario Party to become a touchy subject. That is, until we were “graced” with Mario Party 9 for the Wii. The series had been absent for an awful long time after Mario Party 8 and many fans, like myself, thought that the series was all washed up and was to be replaced with the likes of Wii Party. Ehh. Not that there’s anything wrong with Wii Party! I just don’t think it measures up to the amount of fun I’ve had playing Mario Party in my past. Recently though, we were graced with a bit of footage, some images, and a fancy shmancy new box art for the upcoming 3DS addition, Mario Party: Island Tour!

Not much is really known about this is up and comer. Other than the fact that it got rid of the atrocity that was MOVING TOGETHER IN A SINGLE CAR IN MARIO PARTY 9. No. NO. NO! I don’t care if you say it was “different” or a step in a “new direction.” It was bad. Plain and simple! It didn’t feel like Mario Party at all. It felt like some sort of weird gimmick you should be able to access in Wii Party. But yes! The car is gone! We’re back to a single player, traversing across a board. Albeit, this board certainly has some different spaces.

We’ll be seeing the return of Green Spaces and Bowser Spaces, that much is certain. But it looks like the good old red and blue ones are a thing of the past (again). Instead, we have +3, +4, and +5 spaces that will most certainly allow a player to advance farther. The blue and red spaces return as some sort of different “Event Spaces,” with the colors possibly letting you know whether that event is good or bad. It also seems like we’re getting the return of Free-For-All Spaces from Mario Party 9 (cringe?). BUT! There are the new “Card Spaces.” Sounds interesting to me. Maybe it’ll make the Mario Party 9-ness go away!

Possibly the most exciting part of the game for most people though is the playable characters. Okay, maybe not EVERYBODY. But it’s definitely huge for me! I was the kid who frantically opened up the game manual whenever I got something new on the N64 to see which characters I could play as (even though I will only ever pick Yoshi). From the gameplay video, it is 100% confirmed that we will see Mario, Luigi, Peach, Daisy, Toad, and Wario as playable characters. But that’s never it! No sir! The new box art happens to reveal a whole lot more. And some of it is very interesting. I think it’s safe to say that Yoshi and Waluigi are pretty solid to return. Why wouldn’t they? Matter of fact, let’s go ahead and add them to the list of 100% returners. There are a couple of intriguing things on that box though. For example, Bowser Jr. YES!!!!!!!!!!!!!! If he’s playable, that would just be awesome. He’s there front and center, walking along the spaces while holding a green shell. Could it really be?! Oh, I hope so. I’m gonna go ahead and say that Bowser Jr. will be a playable character! Also, we see Boo stealing a little bit of the spotlight! I saw him as a pretty welcome addition earlier on (though I really miss using him to steal my friends’ stars) so I think it’ll be nice that he’ll return. We also see Flutter and a Magikoopa present. I can’t say if they’ll be playable, but I think it would be neat! Especially Flutter. Fresh blood is always nice! And then we have Rosalina. That’s pretty exciting, actually! I loved that Nintendo added her in as playable in Mario Kart 7, so I would be more than happy to see her playable in Island Tour!

Let’s take a look at the boards. There really hasn’t been much talk about them or showing off of them. But, as the title of the game suggests, the boards will be centered around islands with various themes. So far, Nintendo has confirmed that there are seven boards to play on but have only shown snippets of four. First, we get a board centered in outer space (complete with a rocket space to land on)! This looks like it’ll be influenced from Super Mario Galaxy too! I love it. Next, we’ve got a mountainous board with cliffs, similar to that of World 6 from New Super Mario Bros. Wii. It also looks like we’ll be looking at a board similar to Toad Road from Mario Party 9. Lastly, we’ve got a town that looks an awful lot like Toad Town from Paper Mario! Not a bad batch of boards!

While I wish there was more information around about the upcoming party game, I’m pretty excited that a lot of it is being kept on the DL. We’re seeing very minimal announcements aside from its initial one and the reveal of the box art. That’s great in my book! Things look like they’re starting to return back to their roots! Ah, nothing quite like rolling a 1-10 and collecting stars! Oh wait… look at the dice block. That’s not a 1-10! And… are those Mini Stars on the box art?! No…. NOOOOO! Please don’t ruin this, Nintendo. I’m begging ya!

Mario Party: Island Tour is set for release in North America on November 22 for the 3DS.