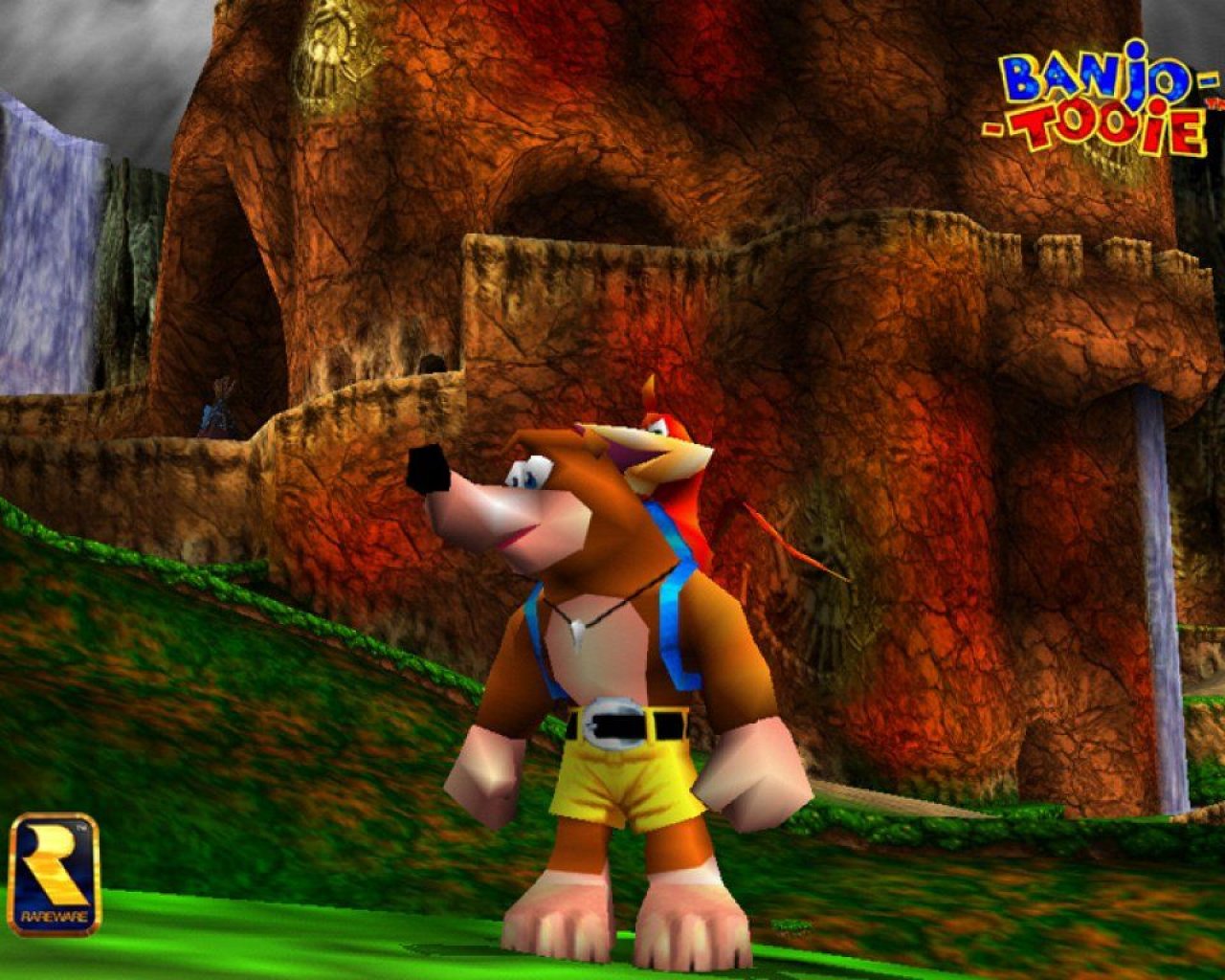 Way back in 2000, the game system of choice was the Nintendo 64. One of the games that was a major hit was the sequel to Banjo-Kazooie, Banjo-Tooie. Coming out on November 20, 2000, it was instantly a big hit. Set two years after the first game, where Banjo and his bird companion Kazooie rescued Banjo’s sister, Tooty, from the clutches of the evil witch Gruntilda. Now after being rescued from under a boulder after her “death” Gruntilda realizes that she is now basically  skeleton and wants her body back. Her sisters, Mingella and Blobbelda, have created a machine called the Big-O-Blaster or B.O.B that sucks the life force out of other people and stores it within the machine. Once B.O.B was full, the life force would be transferred  into Gruntilda. This mean Banjo and Kazooie must once again defeat Gruntilda to save the world from being drained.

This was one of the first games I ever had for the N64 and I loved it. It was one of the games I played for hours every day trying to beat it. I was enthralled in the wacky, crazy world of Banjo. The characters are crazy. They speak in strange jumbled dialogue and are all different kinds of animals and crazy people.  After years of playing I racked up 70 plus hours of play time in the game and eventually beat the game. It was a great gaming experience that took up many an afternoon after school and was overall a great gaming experience. But in 2014 is Banjo-Tooie still as much fun as it was in 2000?

In one word, yes. In three words, oh god yes. Banjo-Tooie is a hilariously fun and challenging game. When I sat down to play the game again, as soon as the opening theme song and title screen came up it brought back all the childlike emotions and energy. I was almost jumping up and down as I started the game. I began, from memory, systematically clearing through the first level. Once I had finished the level, I realized that 2 hours had gone by. This game makes time fly by simply because it is super fun. The levels are crazy and the quests are out of this world. One of my favorite is in the Mayahem Temple. You have to be transformed into a creature called a stony then compete in  a kickball tournament. The quest is crazy and a bit challenging but the sheer craziness  of it makes it loads of fun.

Another reason that makes Banjo-Tooie still fun after 14 years are the side quests. Hidden throughout the world are multiple items for you to find. One of them is the mega-glowbo. This is a larger version of the animal that you give to Humba Wumba to transform you into different creatures and objects and Mumbo who needs a glowbo to let you play as him. The Mega-glowbo when given to Humba Wumba in a special location lets her transform Kazooie in a dragon. While this is not needed to beat the game, it just makes it more fun. I mean, who does not want to have a fire breathing dragon in their backpack. This quest is one that takes a good amount of time in multiple levels with multiple steps in each world but even now that I know the steps it is still fun to find. The other much harder side quests are the Jinjos. These are lost villages that will give you a Jiggy for every Jinjo house you fill with the Jinjo family. These guys are a challenge to find but once you get them all it is a great feeling simply because you do not have to hear them yelling at you to help them.
Banjo-Tooie is fantastic game. It has great ,loveable characters, challenging and entertaining quests, and side quests that give you a reason to keep playing the game after you have beaten it. When it came out in 2000 it was a big hit. It was even ported over to the xbox store in 2009. The reason for this is simple. The game rocks and even 14 years later the game is still just as good as when I first took it out of the box back in 2000. If you played this game back on the N64 in 2000 you know how fun Banjo-Tooie is. If you have never played the game and own an Xbox 360, go on the Xbox store and download it. I promise you will have a great time.